Home OPINION COLUMNS In the midst of fear 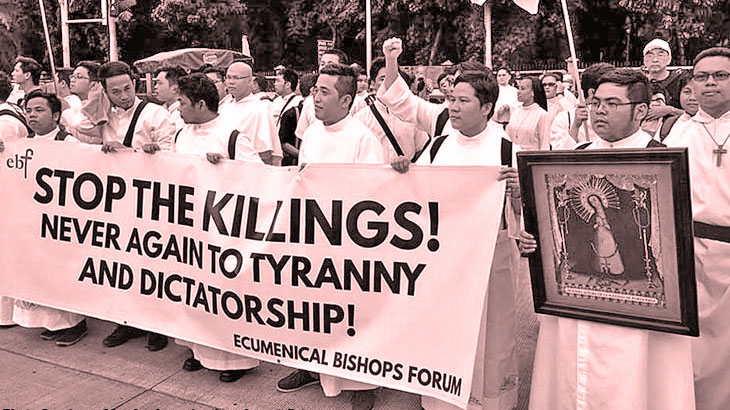 In the midst of fear, terror and tyranny, church people must hold their ground.

Human rights are seeing dire days in the country, and it must especially be felt and exposed this time as the observance of International Human Rights Day on December 10 draws near.

The National Council of Churches in the Philippines (NCCP) was included among the progressive organizations tagged by the AFP as “communist fronts” on the budget hearing in Congress.

A priest of the Iglesia Filipina Independiente (IFI) in the Diocese of Iloilo reported that he is subjected with intense surveillance by state forces.

Ibon Foundation was informed by the PNP that a “person in its office” will be served by a warrant of arrest. This did not prosper, but nonetheless aimed to disrupt the work of this legitimate organization and create a climate of fear.

The joint operations of the Armed Forces of the Philippines and Philippine National Police (AFP-PNP) raided the offices and homes of progressive organizations in Negros and Metro Manila and illegally arrested and detained 62 individuals in Negros who were charged with fabricated cases.

The offices of progressive organizations in Metro Manila are under surveillance.

The AFP carries out continuing massive operations against the revolutionaries in Eastern Visayas, Negros, Bicol, Cordillera and even in Mindanao, especially in the provinces that were affected by the earthquakes, and now by typhoon Tisoy.

The AFP bombs mountains indiscriminately to flush out its enemies without minding of the civilian residents. They also undertake ‘surgical strikes’ to neutralize enemies, as it did in Northern Samar, using 500-pounds of bombs, the blast seat creating a crater—by no measure a ‘surgical strike’ that can be aimed at its enemies. Displaced people in these mentioned regions increased in numbers.

The Duterte’s war on drugs that continue to claim innocent lives has not ceased amidst the call of the people and human rights organizations, here and abroad, that this fake campaign must be stopped.

With all of these terror attacks, progressive organizations mounted more protests and continuing resistance as these regime’s tyrannical “counter-insurgency” is unjust, inhumane and violates the civil and political rights of the people.

Even in time of civil war, the life, security and safety of the non-combatants or civilians must be protected. The Philippine constitution provides that the power and authority of civilian government must prevail at all times and places.

In the midst of fear, terror and tyranny, the most affected individuals are the church people.

There are varied reasons for their fear.

One of the reasons is the “mindset” of the church people who for a long period of time are taught to preach “love, peace and serenity”. Usually, church people promote non-violent means of responding different situations including “armed conflict”. They even prefer to protest with prayer inside the church than to join in different protests with prayer on the streets in the urban centers and in the countryside.

Another reason is the fear of losing a “secure” life. The church people who came from the economically-poor families when they enter in the ministry of the ordained and religious life have climbed to the status of an economically-secure life. With that status, the risk to get involve with the struggling masses is usually not considered.

The other reason but may be the most important reason is the fear of the “leftist or communist”. Church people are indifferent to the people who are struggling even on legal or un-armed means of struggle. The struggle for basic human rights, and economic, political and cultural rights; the assertion for national sovereignty and protection of national patrimony and integrity of God’s creations; and the struggle for the emancipation of the poor, the deprived and oppresses, all of these are being seen as the handiworks of the “communists” and therefore, “godless works” of the people.

All of these fears oppose to the call of the ordained ministry and religious life. If, the church people are disciples of Christ, they fail to follow and emulate their Lord and Saviour. Jesus suffered and died on the Cross for the people whom he loves and serves (cf. John 3:16-17).

There other countless church people who risked their lives in solidarity with the poor and marginalized sectors of the Philippine society. They stood their firm stand against the fascist and dictatorial rule of the Marcos regime and the post-Marcos presidents.

Like the NCCP, church people must stand by their mandate by saying:

“The NCCP vehemently condemns the malicious and careless tagging of the Armed Forces of the Philippines. We consider this move of the AFP as an attack to our Christian faith and tradition. We will remain resolute in our prophetic witness and service to the people even in the midst of shrinking democratic space and the rising impunity.”

The Obispo Maximo (Supreme Bishop) of the Iglesia Filipina Independiente issued a solidarity statement for the NCCP says:

“We ask the IFI clergy and members, and the ecumenical church and all people of good-will, to pray for the well-being of the NCCP and the safety of its staff and personnel and to be vigilant at all times because the devil, like a roaring lion, is just around seeking whom he may devour, even as we continue to cling on, embrace and take comfort on the liberating word of the Lord Jesus: ‘Blessed are you when people revile you and persecute you and utter all kinds of evil against you falsely on my account’ (Matthew 5:11 NRSV).”

In the midst of fear, terror and tyranny, church people must hold their ground, unite, get organize and get involve. Church people should participate in the struggle to end the Duterte’s madness, brutal “counter-insurgency campaign” and reign of terror.