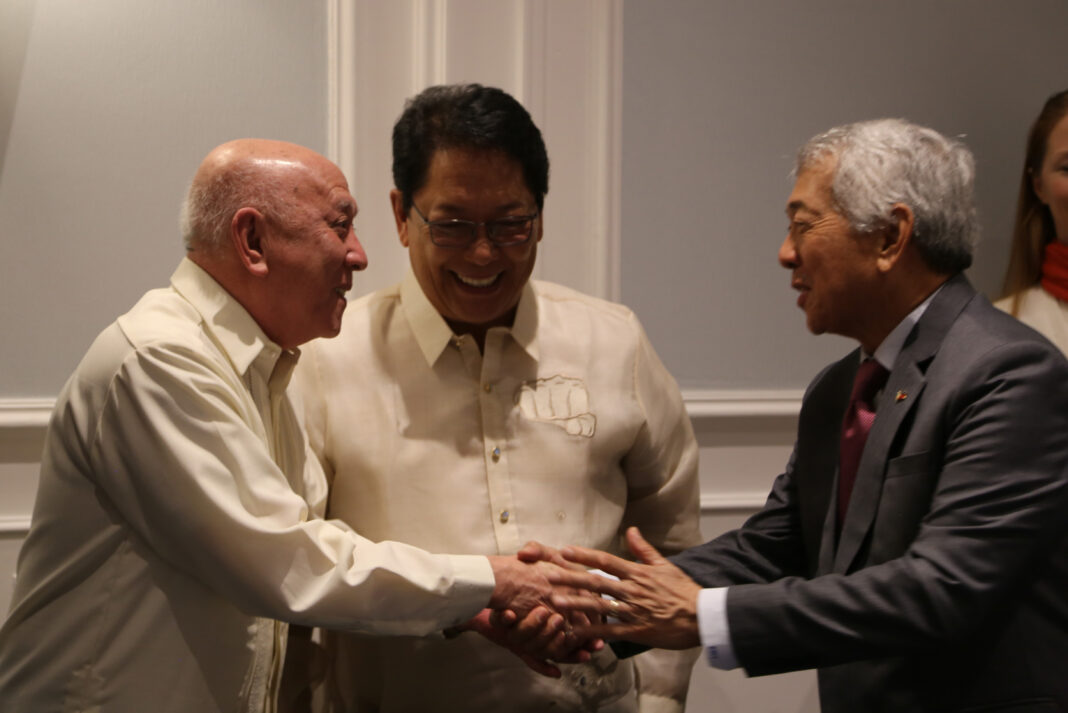 “There are reasons to hope we can hurdle the task we meant to accomplish in these talks. From the pre-meeting of the panels held last night to finalize our discussion agenda today, I see the same commitments of both parties that animated us during the past round of talks to remain strong,” said GRP Peace Panel Chair Silvestre Bello III.

“As in the previous two rounds of formal talks in Oslo, I continue to declare that the two negotiating panels can negotiate in a non-adversarial way and overcome any obstacle by addressing the roots of the armed conflict and seeking to satisfy the demands of the people for basic social, economic and political reforms in order to lay the foundation of a just and lasting peace and build a Philippines that is truly independent, democratic, just, prosperous and progressive,” said Jose Maria Sison, Chief Political Consultant of the NDFP in his statement in the opening ceremonies.

“It is very opportune to hold this round of talks at the advent of the new year that promised enabling hope. Indeed, we shall need this hope to tackle the rigorous subjects on socio-economic, political and constitutional reforms, and of ending hostilities and disposition of forces,” said Bello.

Both panels hold on to adherence to the agreements they have forged from the beginning of the talks and since the administration of President Rodrigo Duterte.

“We are glad that we did not falter in resuming the talks after seven years of impasse to be followed by another five years. For indeed, our first and second round of talks in August and October, respectively, were no small measures of our commitment to the tasks of ending the armed conflict and of building peace. Our joint signed commitment to stay at the table and complete the negotiations within a specific timeframe, provided us the needed momentum to discuss remaining substantive agenda of the negotiations,” said Bello.

“The Filipino people, the NDFP and its forces continue to hope that the peace negotiations will successfully pass through the following tests and phases: the amnesty and release of all political prisoners in compliance with CARHRIHL, the forging of CASER and CAPCR, the implementation of the three priorly cited agreements and the forging and finalization of the EHDF,” said Sison.

“Our respective declaration of indefinite ceasefires in August to accompany the talks put flesh to our commitment at the table. More so, it afforded our people tangible dividends of the peace talks, given the lowering of the level of violence on the ground, especially in conflict-affected communities. Undoubtedly, we both earned confidence that allowed us to start the discussion of a possible joint ceasefire that will hopefully lay the groundwork for ending hostilities,” said Bello.

From the first round of talks in August and after both parties declared unilateral indefinite ceasefires, a bilateral ceasefire agreement is being worked out, pending the presentation of the GRP’s draft within 60 days of the declaration of ceasefire.

The GRP was unable to present a draft after 60 days, but a ceasefire committee was created during the second round of talks in October.

“I am one with President Duterte’s optimism that in this round of talks, we are able to finalize and approve the joint ceasefire agreement. Towards these agenda, the GRP panel has come prepared to exchange and discuss our drafts on said agreements,” said Bello.

The NDFP, however, remained firm that compliance with the CARHRIHL and JASIG should be a primordial concern to forging the bilateral ceasefire.

The NDFP also underscored that the discussion of end of hostilities comes after implementation of future agreements in the social and economic reforms and political and constitutional reforms.

“If implemented to the satisfaction of the Filipino people and the NDFP, these agreements shall lay the full basis of the Comprehensive Agreement on the End of Hostilities and Disposition of Forces as early as 2020-21. The leaders, officers and troops of the warring parties can expect to benefit from a mutual general amnesty,” said Sison.

“We clearly state today that the release of the above-mentioned political prisoners should not be seen as a mere confidence-building measure or a gift to the NDFP. It is a matter of justice and an obligation of the GRP under CARHRIHL. Neither should the political prisoners be treated as trump cards to extract concessions from the NDFP. Such conduct is bound to further erode mutual trust and confidence,” said Agcaoili.

Read: No political prisoners were released ahead of the third round of peace talks.

“We have repeatedly raised the issue of the release of all the NDFP-listed political prisoners as a matter of obligation on the part of the GRP under CARHRIHL. We have also been repeatedly assured by our colleagues on the other side of the table. But sadly, close to 392 of these political prisoners remain in jail,” said Agcaoili.

Having gained attention for the last few months, the issues of release of the political prisoners was expected to be addressed by the GRP in this round of the talks.

“I am also hopeful we can meaningfully discuss the issues that persistently confront our negotiating table, such as prisoner release; the implementation of the reconstructed JASIG list; the full operationalization of the Joint Monitoring Committee of CARHRIHL; and the amnesty program,” said Bello on this matter.