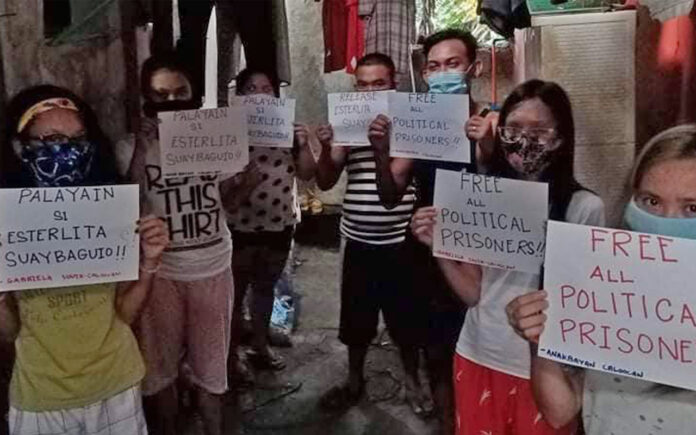 On August 26, 2019, Suaybaguio was arrested using a search warrant issued by Quezon City Executive Judge Cecilyn Burgos-Villavert, the same judge who issued search warrants in November 2019, which was used to raid the offices of Bagong Alyansang Makabayan Tondo and several offices of progressive groups in Negros.

Suaybaguio was charged with illegal possession of firearms and explosives, which human rights group asserted were planted evidence. She spent her 60th birthday in prison.

“We are also worried about Suaybaguio’s condition in detention at Camp Karingal in Quezon City. The said facility has been repeatedly in the news for reports of COVID-19 transmission, which is expected in over congested prisons such as the camp,” said Karapatan.

Paolo Colabres, the paralegal officer of Anakpawis who was arrested by Quezon City police while ensuring the remains of slain peasant leader Randall Echanis that police took from the family, recently tested positive for COVID-19 after his release from a week’s detention at Camp Karingal.

JUST IN — Anakpawis paralegal Pao Colabres has been tested positive for Covid-19. He was illegally nabbed and detained for more than a week by the QCPD for securing the remains of murdered Anakpawis Chair and peace consultant Randall “Ka Randy” Echanis last week. pic.twitter.com/Nb7aj1cfU2

“This is why political prisoners have filed a petition for humanitarian release at the Supreme Court in April 8, 2020, citing jails in the Philippines as ticking time bombs in the light of the COVID-19 spread. Lamentably, the Supreme Court has yet to rule on said petition nearly five months after it was filed,” Karapatan said.

According to Karapatan, they have documented 635 political prisoners, with 11 of peace consultants in detention, 53 elderly and 95 sick among them all around the Philippines.

“We demand the immediate release of Esterlita Suaybaguio, as we accuse State forces of conducting illegal and warrantless arrests and other human rights violations against political dissenters and peace advocates. We call on Filipinos and the international community to uphold justice and accountability amid the brazen fascism of the Duterte administration,” said Karapatan.

[We in GABRIELA Metro Manila stand that people like Esterlita Suaybaguio are those who truly uphold peace and worthy to emulate among women struggling for a humane society.]

The case of Esterlita Suaybaguio: another pre-dawn raid, ‘planting of evidence’, implausible narrative, the usual charges, Villavert warrant plus a podcast