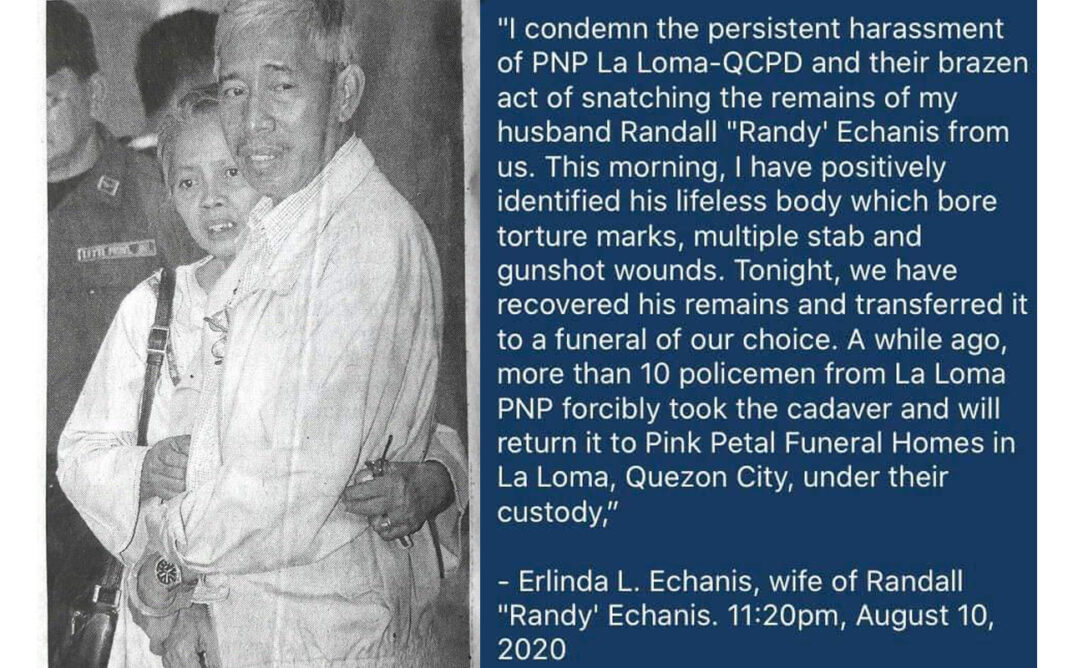 “I condemn the persistent harassment of PNP La Loma-QCPD and their brazen act of snatching the remains of my husband Randall “Randy’ Echanis from us. This morning, I have positively identified his lifeless body which bore torture marks, multiple stab and gunshot wounds. Tonight, we have recovered his remains and transferred it to a funeral of our choice. Tonight, more than 10 policemen from La Loma PNP forcibly took the cadaver and will return it to Pink Petal Funeral Homes in La Loma, Quezon City,” said Linda Echanis, widow of the peasant leader.

The family were told by the police there was no release order for the remains.

Anakpawis National Chairperson Echanis, 72, along with his neighbor Louie Tagapia, were killed inside a rented house in Novaliches, Quezon City, at past 1am of August 10. Anakpawis and Kilusang Magbubukid ng Pilipinas said suspected state forces were behind the killing of Echanis, but were trying to make it look like a common crime.

Atty. Luchi Perez, Anakpawis legal counsel, said in an interview with ABS-CBN that the police were taking away Echanis’ remains because of a requirement of the Criminal Investigation and Detection Unit of Quezon City Police District (QCPD) for a release order to be issued by the police station or the funeral parlor.

Perez insisted a release order was not a requirement at all, “because the body was properly identified by the spouse and the officemates of the deceased and it was properly examined by a doctor.”

The lawyer relayed there is also a scheduled autopsy to be done by the Commission on Human Rights in coordination with Dr. Raquel Fortun to be conducted at the UP Philippine General Hospital on Wednesday, August 12.

“There is no authority on the part of the police to retrieve the body. Wala silang court order. This is clear harassment on their part,” said Perez.

She stressed that the remains already underwent a legal process for release earlier.

Earlier, the QCPD earlier Insisted that Echanis was not one of the two killed, but a Manuel Santiago and Louie Tagapia, 48, from the identification cards (IDs) taken from the scene.

QCPD director Police Brigadier General Ronnie Montejo said investigators verified the identities of the victims through IDs and matched the photos with the victims’ faces.

The QCPD earlier reported that the only killing in their area that took place the same time as Echanis’ murder was a stabbing incident that killed two men in Novaliches, even after groups Echanis belonged and many media outfits have published initial reports on Echanis’ death with his photo.

But from the photo in the ID, Manuel Santiago was indeed Echanis.

“Unless Randy has a doppelganger, an identical twin or is a reincarnation of Houdini, the police investigators should prove they deserve the fat salaries they have with their insistence that the NDFP political consultant is not one of the victims of the gruesome murder,” said Olalia.

Olalia stressed that Echanis was a public figure who appeared or spoken in many rallies in Quezon City and elsewhere. Echanis was also third nominee of Anakpawis Party-list in the 2010 elections.

“Surely the police “intelligence” had a cache of pictures of him with all the interest on his person and activities and with all the funds for police trainings and seminars on police investigation and “intelligence”,” said Olalia.

Olalia also remarked if Echanis was detained or a detainee for police to be asking for a release order for his remains.

Asked about the murder of another peace consultant being blamed to state forces, Malacañang said to wait on the results of the investigation.

“Let’s wait for results of police investigation before pinning death of Echanis on anyone,” said Presidential spokesperson Harry Roque.