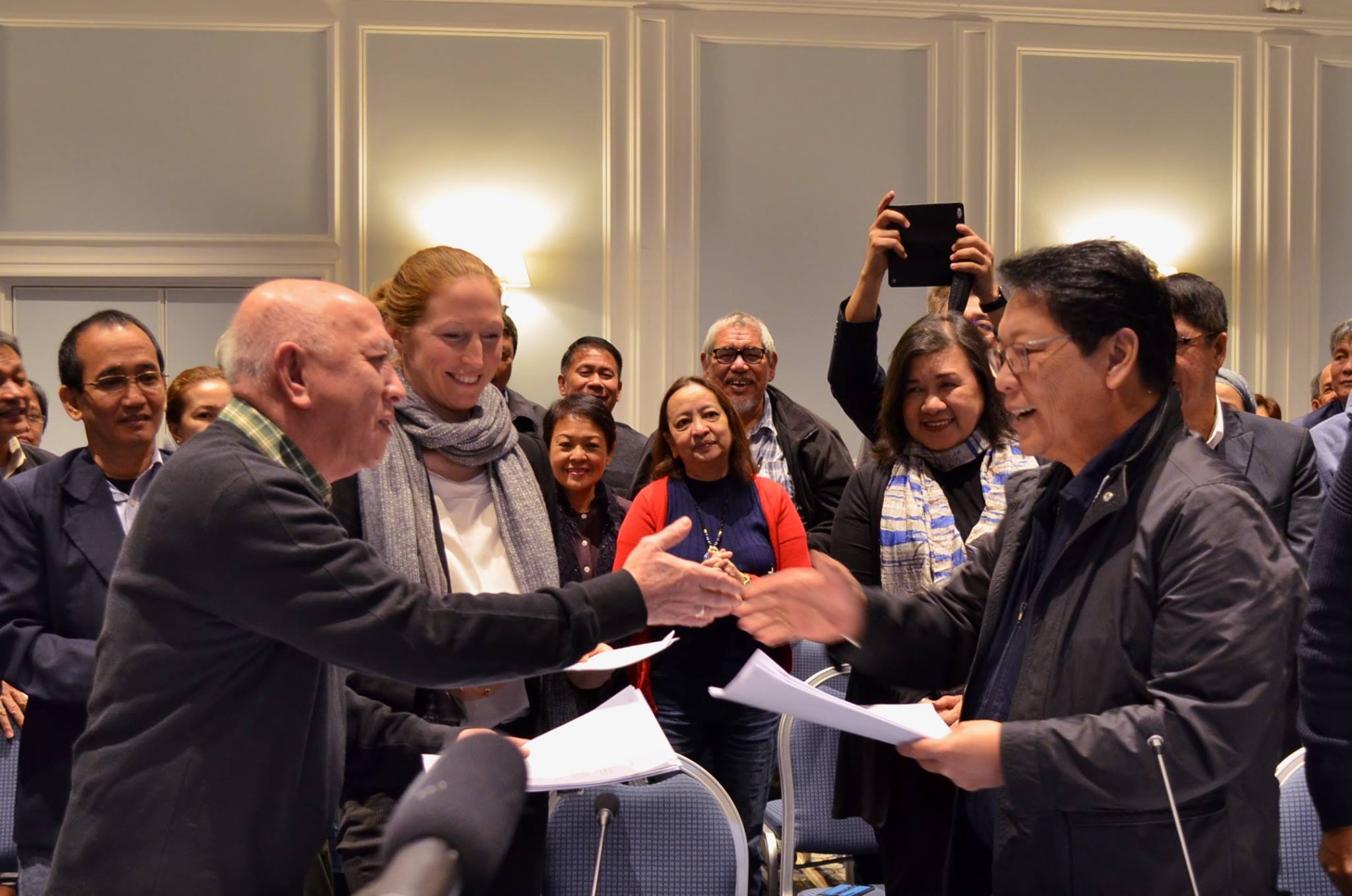 Agreement on said guidelines had stalled since 2004. A draft was agreed and signed within the peace talks in 2011, but was later withdrawn as the talks collapsed that time.

“The importance of the supplemental guidelines is that it will govern the operations of the [JMC] as well as the Joint Secretariat…That Joint Secretariat receives complaints of violations of human rights and international humanitarian law by both sides,” said NDFP Peace Panel Chair Fidel Agcaoili.

“I am indeed very glad that this CARHRIHL, which I was privileged to negotiate and sign with the NDF in 1998, now come into fruition with the adoption today of Supplemental Guidelines for the full operation of its JMC,” said Silvestre Bello III, GRP Peace Panel Chair.

The JMC is the merged monitoring committees of the GRP and the NDFP tasked to oversee the implementation and the achievement of the objectives of the Comprehensive Agreement for the Respect on Human Rights and International Humanitarian Law (CARHRIHL).

With the full operation of the JMC, both parties will now have the parameters to determine the need and conduct joint investigations on complaints mutually filed against them. Agcaoili cited the case of Sotero Llamas, an NDFP consultant who was killed where his case was filed against the NDFP, accusing the NDFP of killing their own. The case was also filed against the GRP, mentioning military harassment two days before Llamas’ killing in the complaint. Agcaoili said the accusation of child soldiers on both sides may also be subject to a joint investigation where the third party facilitator Royal Norwegian Government, UNICEF and other institutions may also take part.

The GRP peace panel said this signed agreement is an indication of their commitment to human rights.

“The full operation of the [JMC] with its Supplemental Guidelines in place should not be difficult under our legal regime, that includes new and bold laws and statues upholding human rights and international humanitarian law such as law against enforced disappearances, Anti-Torture Act, International Humanitarian Law Act, Human Security Act, the Writ of Amparo and the Writ of Kalikasan among others,” said Bello.

“I therefore view the signing today of the Supplemental Guidelines not only as an affirmation of the Duterte administration’s commitment to human rights protection and adherence to international humanitarian law, but likewise a complete dividend of this round of talks,” said Bello.

The NDFP agreed that the signing was an advance in the talks.

However, Agcaoili reminded the GRP panel that, “The full implementation of the CARHRIHL requires the release of the 392 political prisoners immediately.”

Since the first day, the GRP continued to press on its desire to sign a bilateral ceasefire agreement with the NDFP in this round of talks.

“This should be taken as an incentive for all of us to work harder in the remaining three days of this round of talks, especially on our efforts to put in place a joint ceasefire agreement, a peace dividend that our people have been waiting for,” said Bello.

“[The bilateral ceasefire agreement] is something that can be worked out provided that such conditions for a ceasefire are complied with. We have raised the question of continuing militarization in the countryside, the occupation of schools, daycare centers, even private residences,” replied Agcaoili.

The GRP had repeatedly claimed last year that both parties are in ongoing talks to forge a bilateral ceasefire agreement by the end of November or December.

The NDFP denied this in November, scored the GRP for sowing misinformation and said there is no basis yet for a bilateral ceasefire. The NDFP cited the non-release of political prisoners and the human rights and ceasefire violations as reasons for their stand on the matter.

Karapatan Secretary General Cristina Palabay commended both parties for the signing of the Supplemental Guidelines. She issued a challenge to both parties to investigate the complaints filed against them.

Palabay said that the families of victims of human rights violations filed 4,000 complaints against GRP since 2004. The commitment of the GRP to the CARHRIHL and the peace talks could now be seen when complaints are acted upon.

Karapatan also submitted to the peace talks their report on human rights and ceasefire violations of the GRP from August 21 to December 31, 2016.

VIOLATION OF CIVIL AND POLITICAL RIGHTS
August 21 to December 31, 2016
Based on reports gathered by Karapatan

Click or hover over the boxes to see the figures.

CASES OF USE OF SCHOOLS, MEDICAL, RELIGIOUS OF PUBLIC PLACES FOR MILITARY PURPOSE