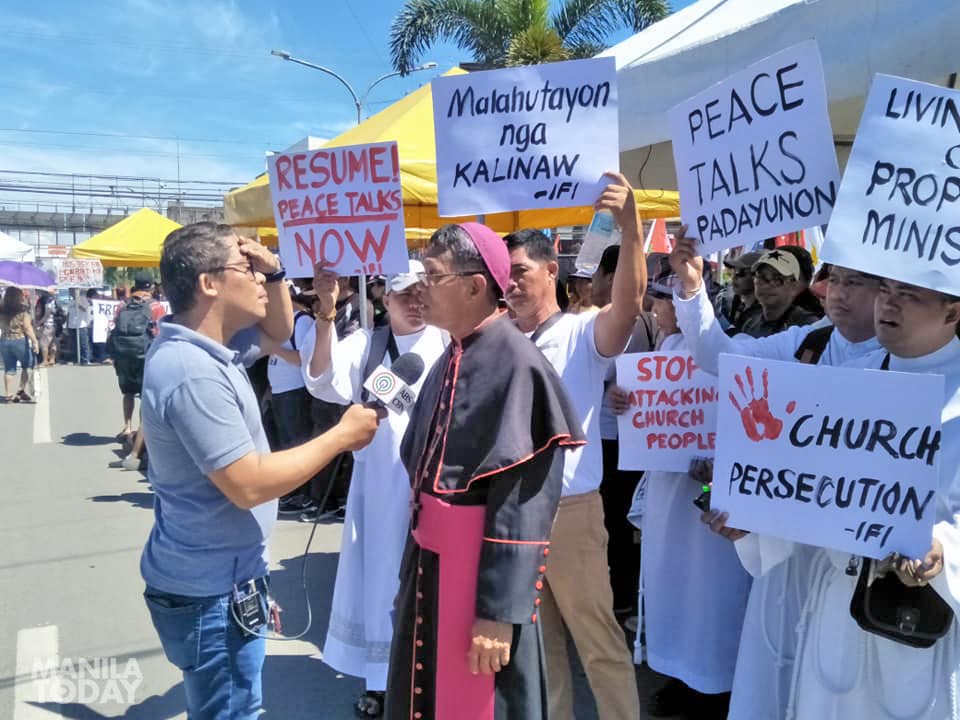 On October 23, church people, especially bishops, priests, deacons and lay people of the Iglesia Filipina Independiente (IFI) or Aglipayan Church, joined the Mindanao Day of Protests spearheaded by peasant organizations. They support the struggle of the peasant organizations for genuine agrarian reform and rural development.

October is Peasant Month as declared by the peasant movement in the Philippines.

The month of October is supposedly the “emancipation” of the poor farmers through Ferdinand Marcos’ PD 27, issued on October 21, 1972, declaring the whole country covered for land reform but for “rice and corn” only. It is a sham land reform because the Marcos regime allowed landowners to transform their landholdings into a commercial lands, most specially plantations of banana, pineapple, rubber, palm oil, mango and other cash crops.

At present, with the suspension of the peace talks between the government and National Democratic Front of the Philippines, the land problems worsen.

The “land-to-the-tiller” demand of the poor peasants was paid by blood as seen in recent spate of farmers’ killings and other forms of military attacks against peasant communities nationwide. The latest is the Sagay massacre in Negros Occidental.

Some leaders of the peasant organizations are arbitrarily arrested and detained or abducted slapped with trumped-up charges or even killed.

The breaking of the monopoly of big tracts of land is impossible without an implementation of genuine agrarian reform and rural development.

The government “land reform programs and laws” such as the Presidential Decree No. 27, Comprehensive Agrarian Reform Program (CARP), National Tourism Act of 2009 and Special Economic Zones (SEZ) Act, have allowed landowners to deny the farmers of land distribution and even convert lands to non-agricultural use.

According to Ibon Foundation (Ibon), records in the Department of Agrarian Reform “show that 98,939 hectares of land were approved for conversion from 1988 to 2016, while 120,381 hectares were approved for exemption from land reform coverage for the same period.”

“The National Irrigation Administration (NIA), an average of 165,000 hectares of irrigated prime agricultural lands are converted to other uses annually. Varying data and evidence from the ground show that there have been illegal conversions and correspondingly, violations of social and economic rights of farming and fishing communities affected by such conversions,” said a report by Ibon.

Genuine land reform is always a challenge of the struggling people. In fact, the national democratic struggle is basically a peasant struggle. The ongoing peace negotiations between the Philippine government and the NDFP had addressed the land problem and the Comprehensive Agreement on Social and Economic Rights (CASER), which includes the implementation of genuine agrarian reform as a necessary first step in addressing the root causes of pervasive poverty especially in the rural areas. The agreements on agrarian reform and rural development were set to be signed last June 2018, but was aborted by the military officials in the Duterte administration.

The Duterte regime had abandoned the peace talks and fully followed the powerful landlord and comprador interests, also that of his military-cabinet officials.

The farmers’ organizations have vowed to sustain their concerted action pressing for genuine agrarian reform, rural development and national industrialization.

In Mindanao, however, the peasant organizations are not only fighting for genuine land reform. They are also fighting against Martial Law in Mindanao, massive human rights violations, military, police and paramilitary abuses and attacks and plunder of the natural resources by the foreign investors and local corporations.

The struggle of the peasant organizations, especially the poor and middle farmers, along with workers and other democratic sectors in the Philippine society have to face also the current rice crisis, high inflation rate and rising costs of the basic commodities and services, like water, electricity, transport and other government fees.

Comprising more than 70% of Philippine society, the poor and middle peasants and farm-workers are the most exploited, oppressed and neglected people in the Philippine society. Along with the national minorities, they suffer the most from the economic crisis and the first victims of state terrorism and fascism in the countryside.

Many church people had already awaken on the true problems of the Filipino peasantry.

The IFI recognized the need for a strong solidarity of all struggling sectors who are addressing the same problems.

Other churches and church organizations have been also supporting the struggle of the peasant sector. The Rural Missionaries in the Philippines has been doing it since its foundation. It continues to say at present, “As Christians who vowed to serve the rural poor, we are one with the Filipino peasants in the continuing struggle for land, justice and peace.”

The IFI will never waive its prophetic role to denounce the evils that inflict the Filipino people, especially the peasants, fisherfolk and national minorities.

The Supreme Council of Bishops of the IFI in May 1988 had issued statement in solidarity with the struggling Filipino peasantry, which most of us, clergy and lay people have cherished.

“The Iglesia Filipina Independiente has no land to give and wealth to offer. We only have ourselves to share. Living out our heritage is our response,” read a part of the statement.

The IFI concluded its statement (May 1988) with a call: “Let us all come together to resolve them so that this country shall be a land of justice and peace.”