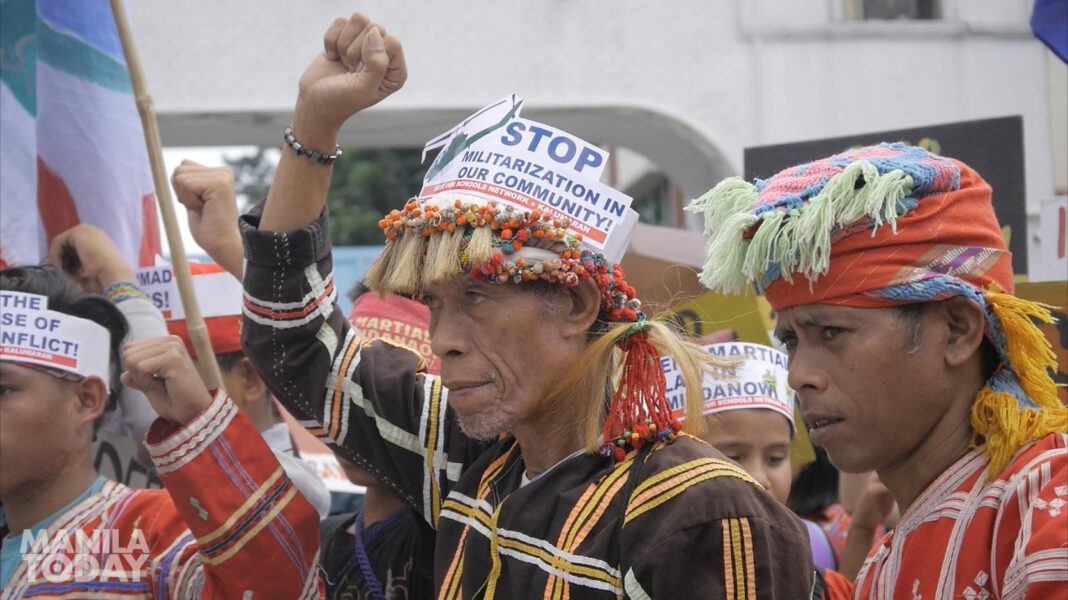 Lumads and Moro peoples troop to the Department of National Defense at Camp Aguinaldo in Quezon City on October 23 to protest Martial Law, militarization, rampant killings, increased surveillance on activists and suspected individuals, violent dispersals of people’s protests in Mindanao.

Members of Kalumaran and Save our Schools Network, who temporarily evacuated to Manila to hold the ‘bakwit school’ of Lumad children, and Suara Bangsamoro members led the protest.

“The regime’s response to the people’s legitimate demands is nothing but ultra-fascist attacks which exposes its outright neglect to our poor condition,” said Kerlan Fanagel, Vice Chairperson of Kalumaran.

The group cited several massacres under Duterte’s rule such as the Lake Sebu Massacre, Patikul Massacre, the killings of peasants in Compostela Valley and Caraga, and in other parts of Mindanao, where total death toll numbers to 153.

“Thousands became internal refugees due to Duterte’s bloodthirsty policies. Our youth had to stop studying because of the forced closure of our schools,” stated Fanagel.

The groups lament that aside from extrajudicial killings of drug war suspects, peasant, indigenous peoples and activists, countless cases of arbitrary arrests of student and youth activists, peasant leaders, union organizers and other known dissenters were recorded, like the case of GenSan 13. They also decried the attempts of government forces to suppress rallies, fear-mongering and red-tagging and the violent dispersals of picket lines, such as the cases of Shinsun and NAMASUFA strikes.

The Moro peoples’ group protested that displaced residents of Marawi are not yet allowed to return home and are unable to rebuild their lives even a year after the ‘liberation of Marawi.’

“Duterte and his minions consciously and indiscriminately use fascist terror even though it’s more than obvious that the poverty and hunger of the people, which necessitates substantial economic reforms, is the root of their revolt,” stated Jerome Succor Aba, national chairperson of Suara Bangsamoro.

“The people of Mindanao and the Filipinos in general demand change. Two years has passed since he assumed presidency but there is no sign of any improvement in our lives,” he added.

Simultaneously, thousands of Mindanaoans under the Bagong Alyansang Makabayan (BAYAN) Mindanao and Kilusang Magbubukid ng Pilipinas (KMP) Mindanao held rallies in Cagayan de Oro and Davao City others to “demand the accountability of [President Rodrigo] Duterte’s regime for its crimes.”

In a statement, BAYAN Mindanao and KMP Mindanao accused the Duterte of “waging a colossal fascist terror and warfare against the people, from the destruction of Marawi, to the continuing bombings and militarization, terror reigns supreme in Mindanao.”

The groups stated that the Duterte administration turned the lands of Mindanao into “killing fields” by murdering peasants, workers, Lumad, and Moro people with impunity under the counter-insurgency program ‘Oplan Kapayapaan’ and ample supply of weapons by Chinese and Russian arms dealers.

“Oplan Kapayapaan bastardizes ‘peace’ and is obviously patterned on the United States counter-insurgency guide. Around 75% of the Armed Forces of the Philippines are deployed in Mindanao and they are using foreign military equipment to kill and sow terror among our people. The US-Duterte regime doesn’t only violate our right to life but also our national patrimony and sovereignty,” the groups added.

The groups said that since yesterday, arrests of agricultural workers have been made in Cagayan de Oro City as a means to stop the region-wide peasant rally in time with the International Peasant Month. Two members of Onyon sa Yanong Obrerong Nagkahiusa (Union of United Agricultural Workers – OGYON) were illegally arrested and detained by members of the Philippine National Police and Philippine Army in a checkpoint in Lumbo, Valencia City in Bukidnon.

The groups also condemned the government’s smear campaign against rallies organized by BAYAN Mindanao and KMP Mindanao by linking it to the “Red October” destabilization plot. They said it is black propaganda to discredit the the legitimate calls and demands of the people and divert the attention of the people from the real issues that affect them.

Based on the Philippine Statistics Authority, inflation rates are skyrocketing in Mindanao regions. The Autonomous Region of Muslim Mindanao has the highest inflation rate across the country, which reached 8.1% last August. Several regions in Mindanao also surpassed the national average such as Region IX and X. Food production also slowed down due to the bombings of rice fields and displacement of peasants. In some provinces, a kilo of rice costs more than PHP 70.00.

“We will not cower over Duterte’s iron-fist rule, nor will we falter in advancing our rights and fighting for genuine social change. While the fascists bathe with the blood of the people, resistance become a necessity even more. Our present situation demands not sham reforms nor empty promises. The crisis rapidly accumulates and requires the ouster of the fascist US-Duterte regime. We are appealing to the Filipino people to heed and support, in any form, our just call.” the groups said. #