A day ahead of Kian Lloyd Delos Santos’ burial, protest actions were held all over Metro Manila led by Stop the Killings Network and Rise Up for Life. The simultaneous protests on August 25 were dubbed collectively as Black Friday, and has been the name of such Friday protests related to tyranny, fascism, and martial rule, also since dictator Ferdinand Marcos’ burial in the Libingan ng mga Bayani (Heroes’ Cemetery) last year. This Black Friday protest condemned extrajudicial killings in the government’s war on drugs.

Kian Lloyd Delos Santos, 17, was killed in police operations in Caloocan City on August 16. CCTV footage that surfaced showed Delos Santos dragged by policemen, while witnesses testified he was given a gun, ordered to run and fire the gun. The death of Delos Santos sparked public outrage against President Rodrigo Duterte’s war on drugs.

Protests in different parts of the globe were led by Migrante, as another overseas Filipino worker lost a child in the war on drugs, another mother pleaded to her employer to allow her to go home so she could mourn and bury her child. 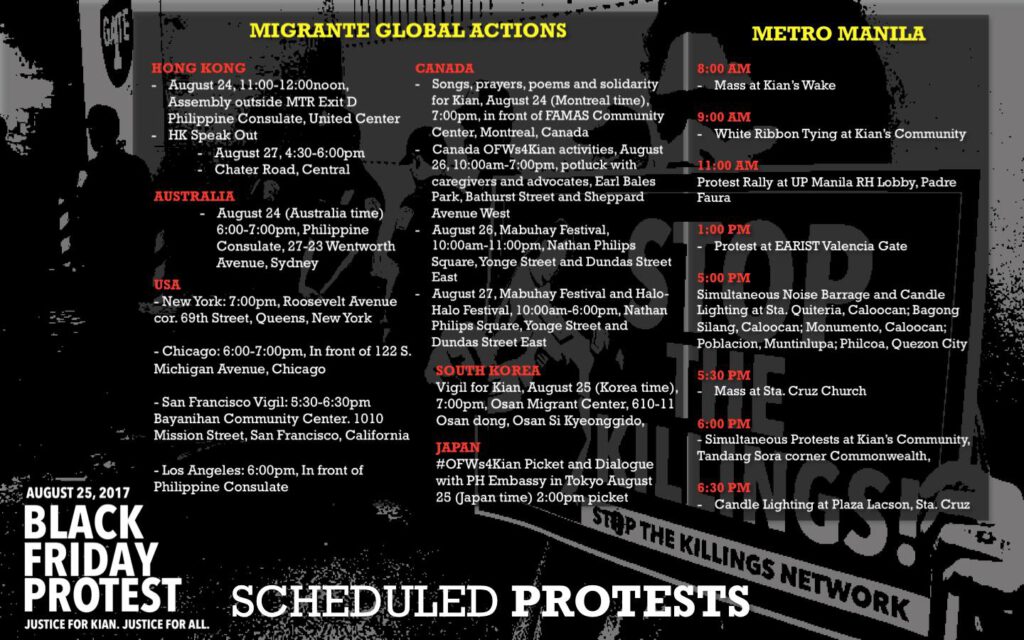 University of the Philippines Manila students picketed at the Department of Justice coinciding with the filing of murder charges against police involved in the operations that killed Kian.

The Stop The Killings Network and #OFWsForKian hold a candle lighting ceremony at the wake of Kian in Sta. Quiteria in Caloocan City as part of the Black Friday Protest.

Students of Antonio J. Villegas Vocational High School in Tondo, Manila held a candle-lighting inside their school premises to call for justice for Kian, who was like them a high school student. The candle-lighting activity and offering of prayers were led by the school’s Supreme Student Government.

Members of the Stop The Killings Network and Health Alliance for Democracy hold a candle lighting activity after a mass at the Sta. Cruz Church in Manila to call for #JusticeForKian and #StopLumadKillings as part of the Black Friday Protest.

Stop the Killings Network noted that while people are starting to express their outrage with the ‘genocidal’ drug killings, more must continue to act and protest until the drug war based on killing the poor is ended.