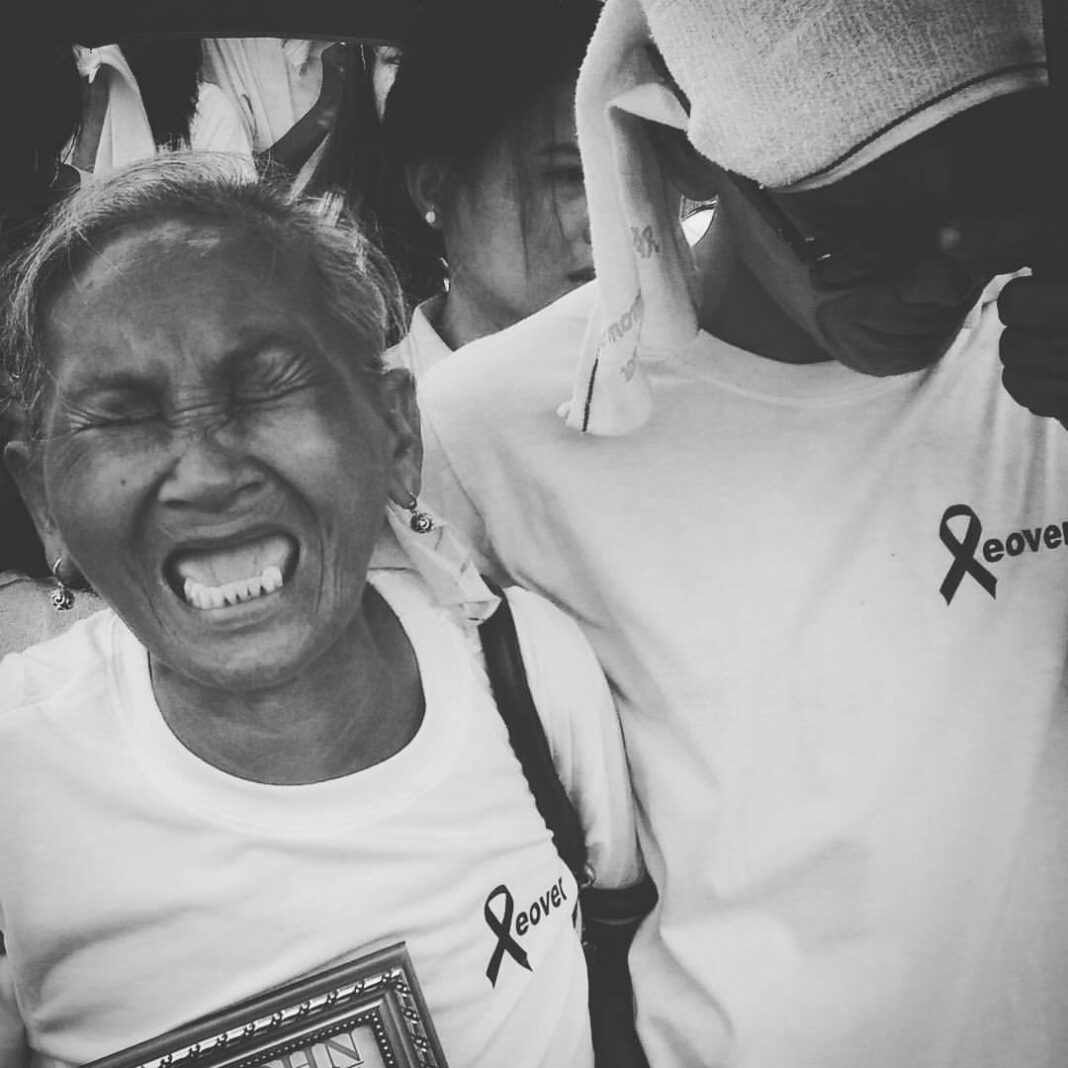 Relatives, friends and supporters of Leover Miranda, 39, a drug-related killings victim in Manila held a funeral march protest from Barangay San Jose in Quezon City to the Manila North Cemetery August 20 to call for justice for Miranda’s death and condemn the continuing rise of killings in President Rodrigo Duterte’s drug war.

Miranda along with his friend Aries Bajacal were reportedly shot dead in Manila North Cemetery on the night of August 3. Miranda’s friends and relatives belied accusations that he is drug user or a pusher.

leover-03
Leover Miranda, 39, was said to be suffering from depression but was no drug pusher or user.

leover-08
He was another casualty in more than 13,000 killed in the government's drug war.

leover-09
Relatives and friends belied accusations that Leover was a drug pusher or user.

leover-07
Elvira Miranda, 69, could not accept the fate of burying her son.

leover-11
She said her son was innocent. But dead men could no longer defend themselves.

The Stop The Killings Network on Sunday announced that series of protests would be held in the coming days to denounce the new wave and sudden rise of drug-related killings in Metro Manila and in nearby provinces including Bulacan and Cavite. More than 60 were killed in series of raids or ‘one-time big time operations’ of the police in only three days last week. Duterte then praised these events as developments in the government’s drug war.

Stop The Killings Network said that the new wave of killings causes them alarm as the Duterte government is becoming more aggressive and hell-bent in spreading terror, fear and tyranny against the people, especially to the poor.

“We will not allow injustice to prevail. We will speak for those who were silenced by the guns that are supposed to protect the weak. We will fight to stop the madness of Tokhang and the rising tyranny in our land,” says Banjo Cordero, relative of Miranda and is also the Stop The Killings Network spokesperson.

He added, “Thousands dead in the bloody war on drugs, most of them poor and powerless. Meanwhile, the big drug lords and their powerful protectors in government are given due process and a second chance to redeem themselves.”

The Stop The Killings Network calls on the public to show their indignation on Wednesday, August 23, starting 4:30 in the afternoon in time for the 3rd month of the Martial Law declaration in Mindanao, for a noise barrage and candle lighting protest in front of the EDSA Gate of Camp Rafael Crame in Quezon City, the activity dubbed as #ShoutForLife.

Cordero said, “Let us unite and shout out for life, for justice. Let our voices inspire others to resist brutality and repression.”

A Metro Manila-wide simultaneous rally would also be held on the afternoon of August 25 for a Black Friday Protest in various protest centers all over Metro Manila and nearby provinces.