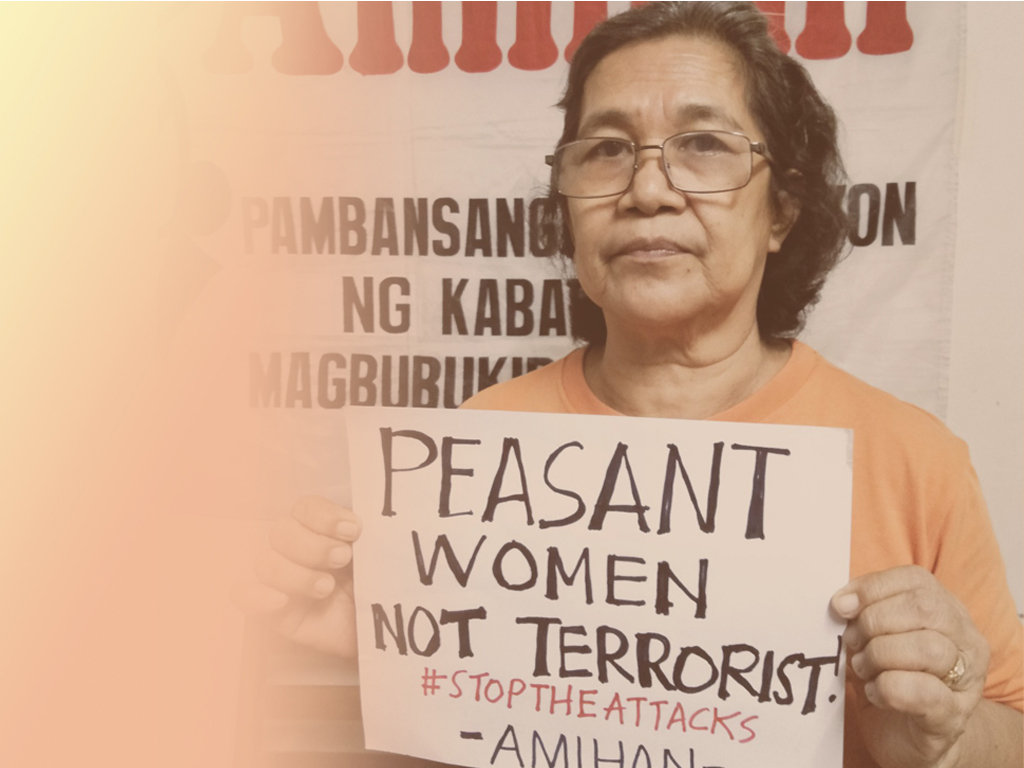 Having faced red-tagging, imprisonment and killing of its peasant women members and leaders, peasant women group Amihan now found themselves at odds with the Anti-Money Laundering Council (AMLC) after the latter ordered the freezing of its accounts.

The group received a letter from the bank on June 8 informing them that their two bank accounts were frozen in compliance with the AMLC freeze order, under Resolution No. TF-38, Series of 2021 dated May 5, 2021.

Amihan only found out about the AMLC resolution on June 8 through the bank letter.

Copy of said AMLC resolution cannot be found on the AMLC website, but an excerpt of it was attached to the bank’s letter to Amihan, ordering the freeze on two bank accounts for a period of 20 days from notice.

The resolution is in pursuant of Section 11 of Republic Act 10168 or the Terrorism Financing and Suppression Act of 2012.

Also on June 8, the group received a resolution dated June 4 from the CA ordering the extension of the freeze order by six months on the said two accounts and other eight accounts of non-government and civil society organizations based in Mindanao, including Amihan’s chapter in Northern Mindanao Region.

The CA resolution said the banks received the freeze order on May 14 and would be effective until June 3.

The AMLC, through the Office of the Solicitor General, filed for an extension of the freeze order on June 3.

In sum, the bank letter, AMLC freeze order and CA resolution extending the freeze order were all made known to Amihan only on June 8. A few days earlier, officials of the group tried to deposit money to the accounts only to be told they were frozen, but the bank was then unable to explain the cause.

Amihan denounced the freeze order issued by the AMLC.

“This is clearly an act of the Duterte government targeting peasant and progressive organizations in an attempt to silence its critiques who have relentlessly been opposing its anti-farmer and anti-people policies which have worsened the poverty and hunger experienced by marginalized sectors gravely especially amid the pandemic,” said Amihan national chairperson Zenaida Soriano.

Soriano called the freeze order unjust and a blunder.

In their statement, Amihan said they will challenge the “unjust and unfounded” freeze order “even up to the Supreme Court, including the constitutionality of Section 11 of RA 10168.”

They said these deprive legitimate organizations like Amihan the right to due process of law, especially since it grants AMLC “unbridled discretion and power to freeze bank accounts on the basis of the mere say-so of individuals who are used by the government through the NTF-ELCAC in targeting red-tagged organizations.”

The group criticized how the freezing of accounts was done without giving them the opportunity for notice and hearing. They were also not able to confront the two witnesses claiming to be surrenderees. Witnesses claimed personal knowledge that livelihood donations channeled through the bank accounts frozen were used to finance the operations of the Communist Party of the Philippines (CPP) and New People’s Army (NPA).

[This clearly did not go through the due process of law because we were not given a chance to explain or address the accusations against us.]

The  witnesses’ testimonies were the only basis of the freeze order, said the group.

[We don’t know those who identified themselves as witnesses and the national office of Amihan had nothing to do with them.]

Earlier, AMLC’s freezing of account of Vic Ladlad was assailed by his wife as ‘unjust, reprehensible and illegal’ as it contained his Martial Law compensation from the Human Rights Victims Claims Board (HRVCB). The HRVCB a body created by Republic Act 10368 to award the reparation claims of Martial Law human rights victims.

Ladlad is a Martial law survivor and National Democratic Front of the Philippines (NDFP) peace consultant who was arrested in November 2018 on illegal possession of firearms and explosives charges, the “usual” cases slapped by police operatives against activists, critics and peace consultants. Only months before his arrest, in May 2018, Ladlad was able to receive his Martial law reparation through the Landbank account frozen by AMLC.

The freezing of the group’s bank accounts comes after several cases of red-tagging and many cases of political persecution putting peasant women activists behind bars or six feet under the ground.

On May 27 last year, several red-tagging posters were displayed along the highway in Mallig, Isabela. The said posters tagged Renato Gameng of Danggayan Dagiti Mannalon iti Isabela (DAGAMI) and other peasant leaders as alleged ‘recruiter and protectors of the NPA.’ Aside from DAGAMI, the organizations red-tagged were the Isabela chapters of Amihan and Ugnayan ng Manggagawa sa Agrikultura.

Peasant women activists from Cagayan and Isabela also reported being red-tagged around the same time the Anti-Terrorism Law was passed in July last year. Among the red-tagging incidents were ripped sacks hanging on trees naming activists and labelling them as members of the NPA. Flyers labelling activists as recruiters of the NPA were distributed in Tuguegarao City.

Amihan also tallied reports of peasant women leaders were being summoned or sought out in their homes by local police or military, asking them to sign documents saying they are surrendering as members of the CPP and NPA as a way to “clear their names.”

Some have been arrested and imprisoned, mostly through the “usual” charges. Out of the 80 peasant women political prisoners in the country, 63 were arrested under the current administration.

Among them are Imelda Pasinabo Sultan and Ma. Lindy Perocho. They were among the 57 arrested in Negros Occidental through police raids via search warrants issued by Quezon City Executive Judge Cecilyn Burgos-Villavert.

The three were all charged with illegal possession of firearms and explosives.

By the end of May this year, Amihan said that 42 peasant women were killed out more than 326 farmers, fisherfolk, agricultural workers and indigenous peoples (collectively known as peasants) killed under this administration. No perpetrator has been apprehended or brought to justice.

Just this May 31, a resolution was filed to investigate human rights violations against peasant women through the Makabayan bloc in the Lower House of Congress.

The attacks against peasant women prompted Amihan to launch the #DefendPeasantWomen campaign last May.

34 years of service to farmers

“For 34 years, Amihan has led and joined campaigns for free land distribution and against land grabbing, production support for farmers and fisher folk, relief and rehabilitation for victims of calamities, food security and self-sufficiency and against militarization and other forms of rights abuses in rural communities, among others,” Soriano said.

Soriano asserted that Amihan is a legitimate organization pushing for genuine agrarian reform, national industrialization and an end to all forms of discrimination against peasant women.

Amihan, along with rice watch group Bantay Bigas, led the campaign against the Rice Liberalization Law by holding discussions and consultations with rice stakeholders, petition signing, lobbying in Congress and protest actions.

The group conducted several humanitarian relief operations last year. One of them is a series of donation drive last year to help peasant families in Rizal, Bataan, Isabela, Bicol and Cagayan affected by the lockdown, as well as areas hit by Typhoon Rolly and Ulysses. It also conducted ‘Suplay Pang-suhay sa Kabataan sa Nayon’ which distributed school supplies to peasant and fisherfolk children in Rizal and Cavite.