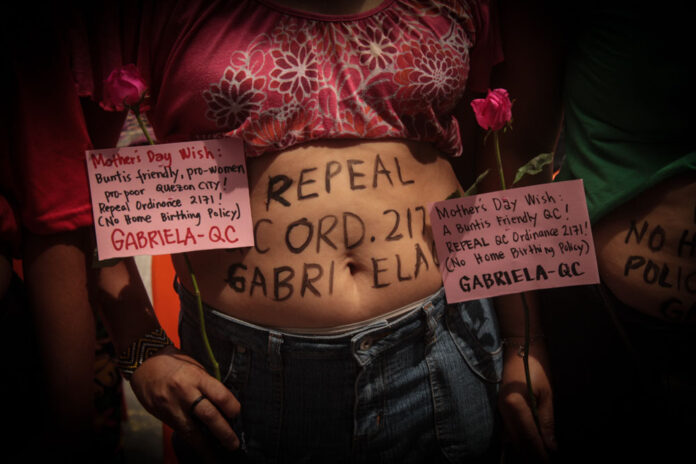 “We have documented cases of women whose lives have been endangered since the ordinance was implemented,” said Mariz Garcia of Gabriela Quezon City.

In a press conference on May 10, Mother’s day, Gabriela Quezon City denounced City Ordinance 2171, calling it anti-poor, since most of the mothers cannot afford to give birth in lying clinics and hospitals.

The Department of Health and the local government of Quezon City implemented on September 2012 Ordinance 2171, banning home birthing in Quezon City and prohibiting traditional birth attendants to deliver babies.

The National Statistics Office recorded a number of 221 maternal deaths in every 100,000 live births. This number has almost doubled since 2009.

But instead of addressing alarming statistics, Gabriela Quezon City iterates that it puts more lives on danger.

“In Manresa, a woman had to hold back giving birth at home for fear of paying penalties for violating the ordinance. The child and its mother almost died during the incident. Families rushed her to the nearest hospital but they have to pay downpayment before they could be admitted. How can this ordinance be of help to us mothers?” Garcia said.

Badeth Andales of Tatalon, also a member of Gabriela Quezon City, shared the experience of their member who found that the ordinance had made home birthing more time-consuming and tedious than giving birth in the hospital. 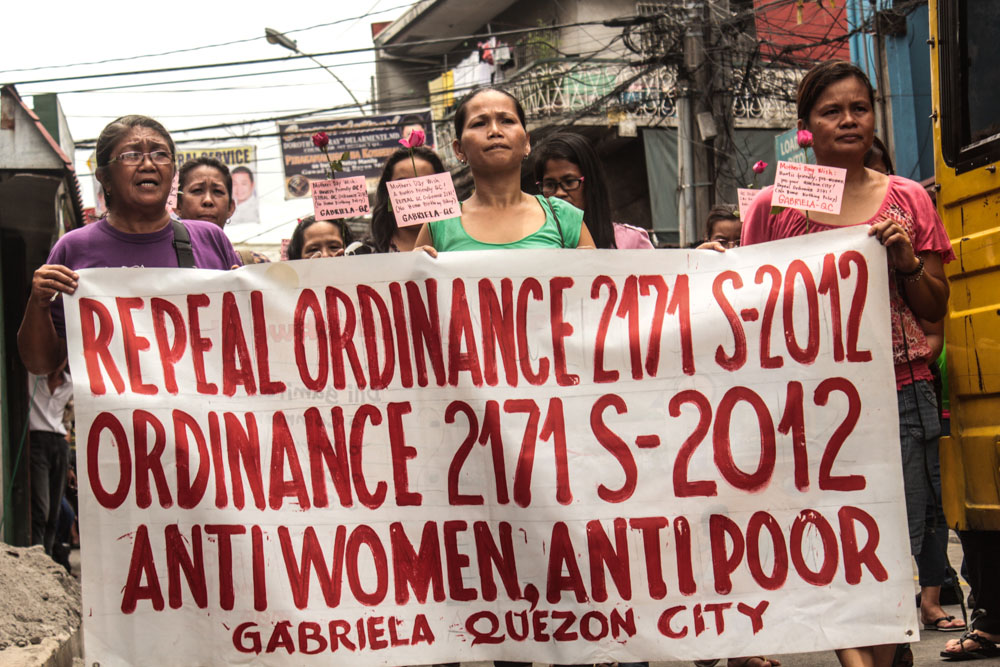 “She has to comply with the requirements if she wanted to give birth to her house. Among these [requirements] were a waiver, clearance from a gynecologist, clearance from a pediatrician, qualification of midwife, contract from a tertiary hospital stating that they will accept her in case of emergency, contract from barangay and processing fee worth P250,” shared Andales.

A “processing fee” and fees for home birthing requirements had to be paid, making all birthing choices for women now costly.

“How can she afford all that? When she could barely pay for a regular check up? Instead of giving us support for our pregnancy, we are burdened with these requirements,” said Andales.

Garcia also mentioned that one of their members, for fear of being charged with P5,000 penalty, was compelled to go to the nearest hospital. Her hospital bill reached P 15,000. But the local government did not provide any financial assistance for the mother.

“We have to solicit among our members and friends to pay for the bill. This is a heavy burden for us poor mothers”, she exclaimed.

A women who gives birth at home before she was able to comply with the home birthing requirements will find a difficult time getting a child’s birth certificate, as no hospital or midwife will sign it for fear of being penalized.

“Instead of implementing anti-poor ordinances, we are calling our Mayor Herbert Bautista and Vice Mayor Joy Belmonte to repeal Ordinance 2171 and provide more health facilities for the pregnant women. They should also recognize role of midwife in giving home birth, provide them skills and training. They should also fund ambulances in each barangay. If they are really serious in dealing with maternal deaths, these are just few of the assistance they could give to us mothers,” said Garcia.

Gabriela also shared plans of consultation and dialogue with the author of the bill, Quezon City Councilor Jessica Castelo Daza, hoping to convince her in their call to repeal the ordinance.

“This ordinance violates our rights as women and will only add up to the series of maternal deaths in our country,” concluded Garcia.