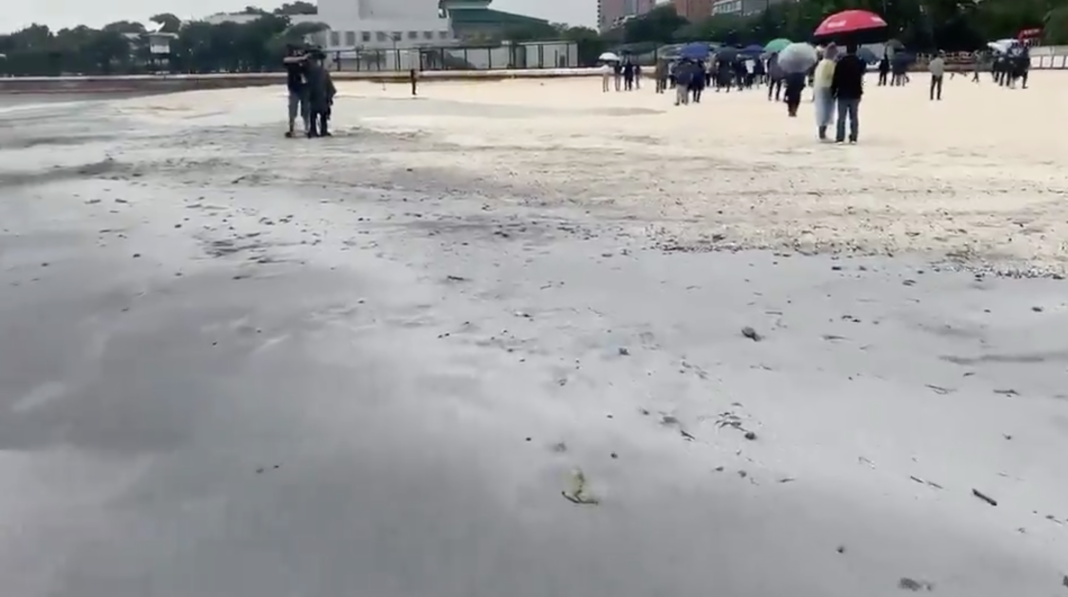 Exactly a year after the government has filled dolomite white sands within the 500-meter stretch of the Manila Baywalk, fishers’ group PAMALAKAYA has criticized the Department of Environment and Natural Resources (DENR) anew over “complete failure” of rehabilitation program in the historic Manila Bay.

According to the group, the project has achieved nothing in relation to marine and fishery resources.

“Because this project is precipitous, useless, and a total waste of public funds amid a public health crisis that every cent is crucial,” said Fernando Hicap, PAMALAKAYA national chairperson said in a statement.

Hicap, a fisherman in Manila Bay, said that its fisheries condition remains “status quo if not badly deteriorating”, citing the average fish catch of a small fisherman that is still at 2-5 kilos per fishing trip.

Should the DENR have planted mangroves instead, the fish catch of small fishermen could have increased.

Hicap, a former Anakpawis Party-list solon, said that the P389-million dolomite budget “could have planted at least P13,000 hectares of mangroves that are vital to marine ecosystem and biodiversity.”

Citing a 2008 study of Primevera and Esteban, PAMALAKAYA said that mangrove planting costs around $607.7 or P28, 881.6 per hectare, which means that the budget for Manila Bay “beautification” could plant a total of 13,469 hectares of mangrove forests.

Similar recommendations have been made by several environment groups including the UP Institute of Biology, drawing the ire of DENR USec Benny Antiporda who called the academic institution the DENR commissions to do several studies as “bayaran” [paid hack].

The cabinet official said mangroves would not be good to look at and the ‘beach nourishment’ was about ‘beautification’, hence the white sand dumping.

The Manila Bay rehabilitation program was declared to have officially started in January 2019. The program has three phases: cleanup/water quality improvement, rehabilitation and settlement and education and sustainment.

Amid receiving backlash on the dolomite white sand dumping last year, the DENR and several of President Rodrigo Duterte’s cabinet officials clarified that only P 28 million of the P 389-million contract for Manila bay ‘nourishment’ was used for white sand dumping. The entire contract, they said, covered the extraction of garbage and other sediments.

Infrawatch Ph, however, estimated the cost of the sand alone to go as high as P 164 million. But the estimated P1,000/cubic meter of sand for the estimated 164,700 cubic meters needed to fill the 500x60meter stretch of Manila Bay would fall short of the P 389-million budget, prompting the group to join calls for transparency.