Home BOOK REVIEW The Political as Popular, The Popular as Political 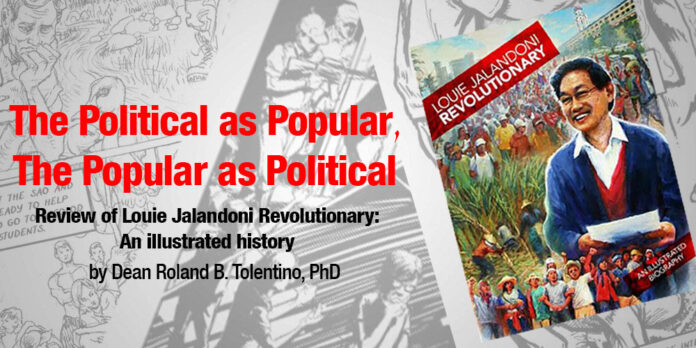 The Political as Popular,
Review of Louie Jalandoni Revolutionary: An illustrated history

The Popular as Political
by Dean Roland B. Tolentino, PhD
Lorem Ipsum

Revolution-making is a tricky business.  It has to create its own culture, or hand in hand with it is an ongoing cultural revolution, to offer to its participants and to the larger citizenry a parallel culture to the state.  Revolution, after all, represents the necessary aspiration and mode of transformation to be able to truly imagine that another world is possible.  Integral to revolution-making, therefore, is the mobilization of art and culture through the politicization of these forms to popularize its cause.

The national democratic movement has not been remised in offering parallel and alternative cultural forms:  mimeographed publications beginning in the 1960s, blossoming of protest mural and visual arts, songs, literature and theater since the 1970s; to more recent and consistent use of interactive effigies, graffiti, online publications and video productions.   These art forms are linked to the social contexts of reception and use. Giant effigies are burned at the anti-State of the Nation Address, protest slogans and art on the streets are covered with new paint, and live performances are rarely documented.  With the exception of criticism and scholarly books and Arkibong Bayan, an online portal of recent political activities managed by Mon Ramirez, there are no archives of the various protest art and cultural forms.

Books remain vital in the documentation of a more lasting political art.  One major stream in the production of books in revolution-making is the narration of the lives of the leaders and revolutionaries.  Jun Cruz Reyes’ Armando (2006) retold the life of revolutionary leader Amando Teng.  Ina Alleco Silverio’s Ka Bel (2010) is on the biography of labor leader Crispin Beltran.  Judy Taguiwalo’s edited Recca: From Diliman to the Cordilleras (2015) collected essays, poetry, testimonials and statements on the life and death of martyr Recca Noelle Monte.  An addition to this is growing literature is Silverio’s Louie Jalandoni Revolutionary.

Biographies and autobiographies, and also film and television bios in the Philippines are part of a political cottage industry.  I remember hearing a remark of an American historian saying that compared to other kinds of books, there was just too much biography books published in the country.  Aspiring politicians use comics during elections to recast heroism in their story and interest in running for the voting public, comprised mainly of the poor and disenfranchised.  Established politicians use biography to recast their vantage position in the retelling of national history.  Prominent business people and socialite-philanthropists use biographies to extol their senior prominence in these fields.

Biographies in revolution-making offer a parallel contrast to biographies of state personalities.  Revolutionary biographies primarily engage in the necessity of revolution.  Louie Jalandoni Revolutionary is as much as on the life of the National Democratic Front (NDF) leader as it is of the Philippine revolution.  The newness in the project, however, is in the use of a popular form harnessed from the comics and graphic novel.  But unlike the graphic novel that visualizes the dark heroism and chosen quest of its character, the book interjects this form with the much larger and real scope covered by the written and graphic, the personal and political, the individual and revolutionary history.   Silverio’s writing elucidates not the heroism of a revolutionary leader but the saga of a person who transcends class privileges and political limitations to enrich the national democratic struggle.

Silverio’s section introductions encapsulate the progression in Jalandoni’s life and the episode’s zeitgeist (defining mood of the time).  Silverio undertakes a difficult writing, precisely as she has forewarned in the introduction, the biographical subject was “self-effacing and self-depreciating, almost to a fault.”  Added to this is the expanse of Jalandoni and the revolution’s life, defined by its founding, shift in primary modality of struggle during martial law, mistakes during Corazon Aquino’s term, the rectification movement and its consequences.  It is a writing of epic tale and proportion.  However, Silverio manages to create a structured spine of writing that covers the scope of individual and movement histories.

Her writing also provided the impetus for the visualization of the six participating illustrators.  What stood out were the visual works that harnessed the comic and graphic forms for a political undertaking.  The illustrators of the chapters “A Charmed Life,” “Fr. Jalandoni,” “An Activist Priest,” “Liberation,” “Life as a Political Prisoner,” and “Escape to Hong Kong” bring forth a newness to the familiar conventions, even as the visuals were sometimes downplayed by the density of texts.  These chapters had the robustness of life and struggle despite the overwhelming events in the substories and the bleakness of the images which are combined from the graphic novel and social realism.

The book is both political and popular art.  As political art, it discusses mass disenfranchisement and seeks social transformation as evidenced in the life and body of Jalandoni.  As popular art, it seeks to appeal to a larger audience.

The book is both political and popular art.  As political art, it discusses mass disenfranchisement and seeks social transformation as evidenced in the life and body of Jalandoni.  As popular art, it seeks to appeal to a larger audience.  In this case, the intellectuals and middle-class, and those sympathetic or can be convinced to the cause of revolution-making.  As the book also combines written and visual art forms, the inter-art result provides a newer literacy to a younger public of readers.  What would be a good direction though for this project is to translate the book into various Philippine languages, helping ensure that with access to language comes access to the stories of Jalandoni and the revolution.

Jalandoni’s inspired and inspiring life account creates a prism that draws the public to what Jonas Staal in his Preface has stated for the artists and their art, which can also be said for citizens and their claims, “to challenge the status quo, and dedicate ourselves to histories and worlds still in the making; to tell the stories of those who struggle outside the eyes of mass media; to tell, listen and learn of the many possible worlds that the Filipino revolutionaries and their many comrades across the world are fighting for.”  But the book inspires because the subject of biography (Jalandoni) is also the subject of history (Philippine revolution).  Jalandoni and many more others like him also become the subject of the Philippine revolution, surpassing their limitations to live a life in revolution-making.  It is a subject-formation ever in progress and serves to inspire newer generations of activists and revolutionaries.

Karl Marx said that “art is always and everywhere a secret confession, and at the same time the immortal movement of its time.”  As Jalandoni and the revolution are public secrets, the book is also a confessional art, a confession to the causes of individual being and revolutionary modernity.  In the arts and culture sphere, being a revolutionary and the idea and praxis of revolution are sustained as parallel progressive cultural formations to the Philippine state.  This book on Jalandoni is also a book on the Philippine revolution, claiming and reclaiming the righteousness and justness of revolution-making.  In our time and term in history, as Jalandoni and the collaborative book project suggest, revolution is our shared immortal legacy.   Let’s continue to make it happen. 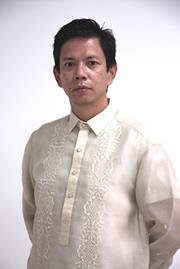 Click here for Lisa Ito’s review of the book