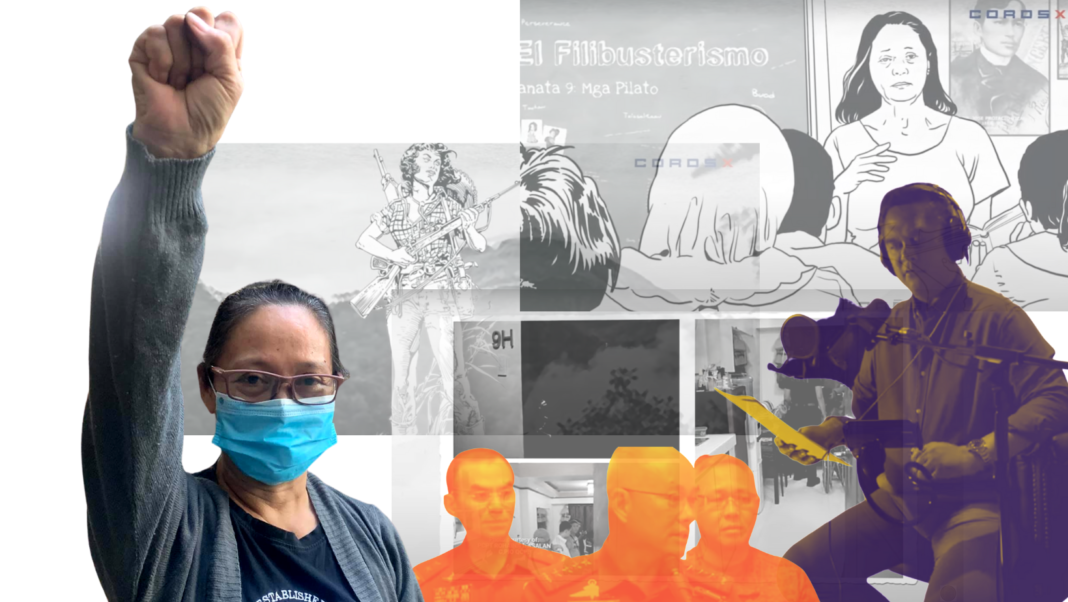 Women rights’ advocate and former teacher Esterlita Suaybaguio was arrested on August 26, 2019 in her condominium unit in Cubao in Quezon City, the property was a few kilometers away from Camp Aguinaldo, the national headquarters of the Armed Forces of the Philippines.

Her arrest had similar details of other pre-dawn police raids against activists, critics and peace consultants.

There is the ungodly hour the police chose to serve the warrant, restraining the occupant for a period of time after which a search would be conducted yielding what has been proven in some cases as improbable to have been there, or as human rights groups and many accused have called them: planted evidence. Planting of evidence by police itself was exposed as a common or patent move in the war on drugs extrajudicial killings.

Many of these raids also stemmed from search warrants issued by executive judges, most common among them are those issued by Quezon RTC Executive Judge Cecilyn Burgos-Villavert.

Illegal possession of explosives charges, despite how implausible the narrative of the police or their informant in applying for the warrant, kept many activists, critics and peace consultants in jail as this is a non-bailable offense.

Suaybaguio’s unit was raided on the strength of search warrants issued by Burgos-Villavert.

The police informant, in the narrative in applying for the warrant, said she conducted a surveillance on Suaybaguio by posting an offer for massage service through a poster that only Suaybaguio availed. The informant said she trained for a week to do massage and went on to provide the service to Suaybaguio. It was then the police alleged she saw that Suaybaguio had companions who had guns on them.

After Suaybaguio, Burgos-Villavert also issued warrants on progressive groups’ offices and activists’ homes in Negros and Manila, resulting in raids that arrested more than 50 people at the end of October 2019. These raids included the home of activist couple Cora Agovida and Michael Tan Bartolome in Manila. Bacolod City RTC Branch 42 Judge Ana Celeste Bernad voided the search warrants against six of the more than 50 arrested in Negros, the second time Burgos-Villavert’s warrants was voided this year.

On November 5, the Bayan Manila office in Tondo was raided on the same judge’s warrants and activists Reina Mae Nasino, Alma Moran and Ram Carlo Bautista were arrested.

Human rights and progressive groups called this a crackdown against activists through “weaponization of the law.” Burgos-Villavert also issued the warrants against Salem and Rodrigo Esparago, who were released after almost three months in jail after Mandaluyong RTC Branch 209 Judge Monique Quisumbing-Ignacio quashed Villavert’s warrants, the first in a series this year. Five others from the Human Rights Day 7, those arrested on pre-dawn police raids and “planting of evidence” on December 10, 2020, remain in jail.

Comprehensive Firearms and Ammunition Regulation Act and Unlawful Manufacture, Sales, Acquisition, Disposition, Importation or Possession of an Explosive or Incendiary Device were among the charges against Suaybaguio.

The Philippine National Police (PNP) and Joint Task Force-National Capital Region (JTF-NCR) of the Armed of the Philippines (AFP) posted a video on how they planned the “capture’ of Suaybaguio that they deemed a high ranking communist leader.

It could be said that this video, after Suaybaguio’s acquittal, did not age well.

The video had 8,649 views as of publishing. It was posted on the account of “The Young Obersver” that had 247,000 followers. The account description is “NEWS AND INFORMATION MUST BE BROADCAST FAIRLY WITH TRANSPARENCY.” Most of its videos in the Politics playlist (which had the most videos among all playlists, save for “LATEST News” that have more or less all the videos on the account) are positive news about President Rodrigo Duterte.

Albayalde was forced to resign before his term ended due to the controversy on “ninja cops” or drug-linked cops in November 2019. Luna was sacked earlier this year for publishing an “erroneous list” of New People’s Army (NPA) members killed by military.

Suaybaguio, according to the AFP-PNP, was deemed a ’big fish’.

“She has been a leader of different levels of organizations of the communist-terrorist group and her recent position is the secretary of the Metro Manila Regional Party Committee (MMRPC), so now the MMRPC has no leader,” Luna claimed.

Aside from the planted evidences against her, Año cited “three previous cases” which include separate multiple murder and frustrated murder cases including the murder of Patrolman Ronald U. Napalan Jr. at Sitio Lobo, Brgy. Mahaba, Cabadbaran City on June 2019.

It must be noted that Suaybaguio is also a peace consultant mandated to be protected under the Joint Agreement on Safety and Immunity Guarantees (JASIG), an agreement in the over 30-year old peace negotiations between the Government of the Philippines and the National Democratic Front of the Philippines.

Albayalde reasoned that those under JASIG were given ‘safety conduct pass’ by the police and military. However, he said Suaybaguio’s case is different, as she was ‘actively engaging’ in illegal activities.

In the video, the then-PNP chief was uncertain and asked the military cohorts only for him to be appraised on the murder raps narrative.

When asked about the operational research as to how Suaybaguio had been arrested, Esquivel was the one who answered.

“During our operational research, some of her targeted recruits or surrendered colleagues in the movement, iyon ang nag-provide sa amin ng intel that led to her arrest,” Esquivel claimed.

He also noted that the operation was executed with the presence of a barangay official, the security officer of the building, as well as another kagawad, other than the police and military. He added that it was done in a plain-view with a video footage.

When asked for a response towards human rights defenders condemning the arrest of Suaybaguio and referred it as another crackdown on activists, Esquivel alleged the usual narrative of police “dati naman nang istorya nila yan kapag may nahuling ganyan.”

He added that Suaybaguio has espoused violations and deceit in the Metro Manila as well as “threatened the very existence of humankind”.

“Imagine if these people will win (in overthrowing the government), you cannot even go to the church because they don’t believe in god,” claimed Esquivel.

A plus: a podcast

The episode ran for 18 minutes and had 223 views as of publishing. It had motion graphics and comics especially made on the story.

He also had Esquivel present in the podcast via phone call.

Both Andanar and Esquivel then exchanged conversations and discussed Suaybaguio’s history in the movement.

In Andanar’s closing statement, he noted that Suaybaguio chose to be a ‘revolutionary’ and it was such a waste.

He also hoped that Suaybaguio’s arrest could be a morale booster to the youth.

According to human rights groups, these state propaganda materials are outright proliferation of disinformation and vilification in order to attain their goal by means of mass intimidation. And the acquittal and release of Suaybaguio could prove just that.

Suaybaguio was a teacher from Mindanao and was forced to move to Metro Manila amid rampant threats and political persecution of activists during President Rodrigo Duterte’s martial law in Mindanao.