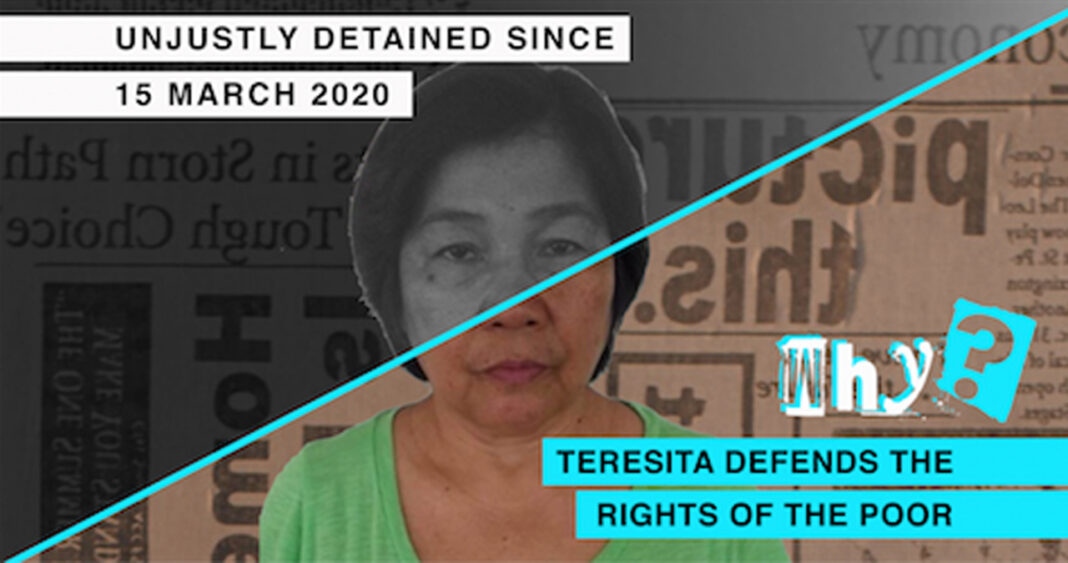 At 62, frail with asthma and a heart condition, Teresita Naul seems a rather unlikely candidate for charges of kidnapping, serious illegal detention, and destructive arson.

This did not prevent joint elements of the Philippine Army (AFP) and national police from arresting her on precisely such accusations on 15 March 2020, in Lanao del Sur, on the southern island of Mindanao, and parading her in front of the media as a “high ranking official of the Communist Party”.

Many of the 468 co-accused in the case – a military offensive by the New People’s Army, a communist insurgency, against the AFP in 2018 – are activists and journalists from Caraga and the Northern Mindanao Region, and also include nuns, a lawyer and public sector employees.

Teresita is no arsonist nor is she a kidnapper, but something even worse for the government of President Rodrigo Duterte: a long-time defender of human rights.

“Nanay Tessie” (“Mother Tessie”), as she’s affectionately called by everyone, boasts a strong sense of humour and a lifetime dedicated to protecting the poorest and the most marginalized.

She advocates for their right to health and other basic social services, and to simply stay alive as a policy of extrajudicial killings has seen bodies pile up throughout the Philippines.

As the Coordinator in Northern Mindanao for Karapatan, a leading human rights group, it was no surprise that Teresita was among those arrested just two days after the country had been placed under lockdown due to the COVID-19 pandemic.

Teresita remains detained at the Agusan del Sur Provincial Jail, in overcrowded and unsanitary conditions that put her life at imminent risk, given her serious breathing disorder. She can’t receive any visit from lawyer or family and she’s reportedly exhausted as she’s been tasked with cleaning the common latrines.

Since President Duterte took power in June 2016, human rights defenders in the Philippines have been repeatedly subjected to trumped-up charges, lengthy pre-trial arbitrary detention, threats, and killings, in total impunity. The aim is to discredit their legitimate work and silence all critical voices. They are also often labelled “terrorists” or “enemies of the State” to encourage violent attacks against them.

This article was published by the World Organisation Against Torture (OMCT), the largest global NGO group actively standing up to torture and protecting human rights defenders worldwide. It has more than 200 members in 90 countries.