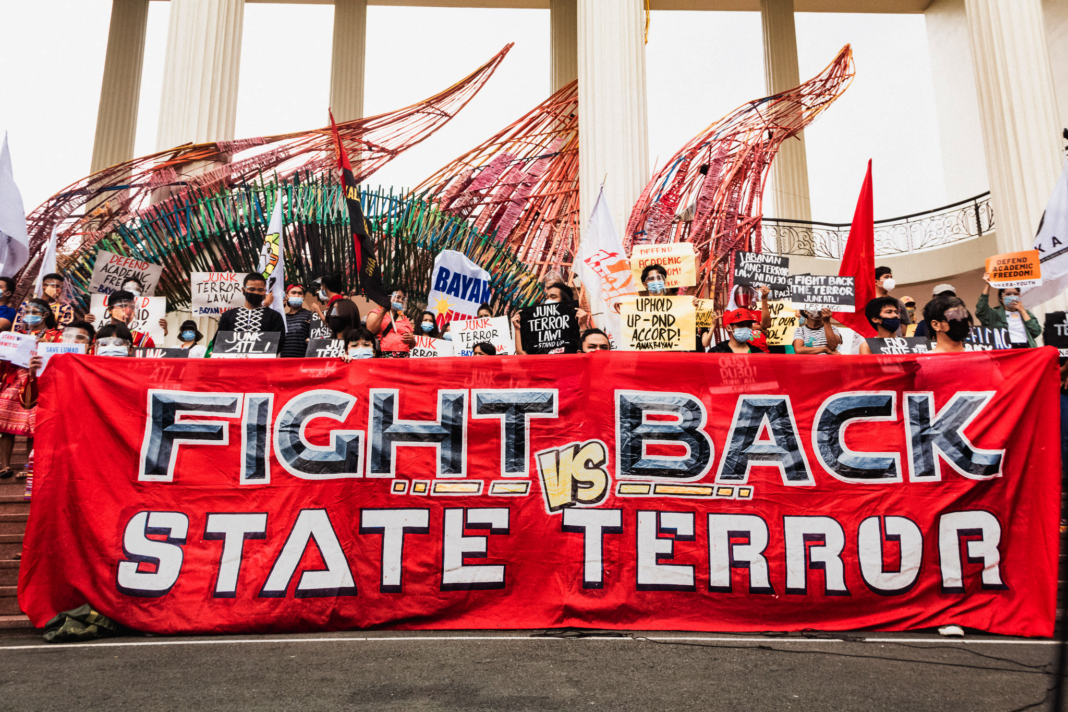 The ‘unilateral’ termination of UP-DND Accord in fact has triggered the UP community unrest. And this protest, they say, is only the beginning of it all.

The evening of January 18 was met with public outrage on social media following the report of the abrogation of UP-DND Accord. This morning, the outrage has been materialized as group of protesters kicked off a mobilization protest at the historical Quezon Hall in University of the Philippines – Diliman in Quezon City.

Progressive individuals from sectors of labor groups, youth formations, and UP chapter national democratic organizations were present in the rally to express firm indignation and support the UP community against the termination of the pact.

To reiterate, the UP-DND accord is an agreement signed in 1989 which prohibits military presence within the premises of UP-wide campuses. Meanwhile, the pact also include that these state forces have to notify the university administration first upon entering.

DND, Do Not Disturb

She also thanked the unwavering support from those who participated in the mobilization rally and urged to continue struggling with fight of UP community.

Co also noted that the abrogation of the pact is beyond the historical role of UP as one of the most important institutions being the bastion of expression of dissent and criticism. That the UP community is “one among the demands of various sectors” which opened their grounds for them along with the community in airing legitimate grievances to the government.

We shall defend UP

The UP President further discussed the importance of the accord.

This, according to UP President Concepcion, is the summary of academic freedom

In his statement released on Tuesday morning, he noted that the agreement was terminated without prior consultation with the university administration.

“We regret that the agreement was abrogated unilaterally, without prior consultation that would have addressed the concerns you raised in your letter,” said in UP President Concepcion’s letter addressed to Secretary Delfin Lorenzana.

He further noted that the scrapping of UP-DND is “totally unnecessary and unwarranted, and may result in worsening rather than improving relations between our institutions, and detract from our common desire for peace, justice, and freedom in society.”

“Instead of instilling confidence in our police and military, your decision can only sow more confusion and mistrust, given that you have not specified what it is that you exactly aim to do to put in place in lieu of the protections and courtesies afforded by the agreement,” the UP President added.

Meanwhile, UP Diliman Chancellor Fidel Nemenzo seconded that “scuttling the Accord sends a dangerous message that intellectual and cultural inquiry has limits.”

“Academic freedom is the lifeblood of UP. It is the air our community breathes and thrives on as it nurtures our critical minds and allows our imaginations to soar beyond the boundaries of conventions. In UP, anyone should be able to think and speak out, no matter what he/she espouses. One of the strengths of UP education is the exposure of our students to the widest range of perspectives. We trust that they will employ reason and critical thinking to discern and distinguish truth from lies, and right from wrong,” said Nemenzo in a statement.

Are we ready for Second Commune?

Lanuza noted that it is only right to revolt so long that we are being assaulted by state fascism. He also called on bakwit or lumad students to not fear amid these alarming issues

Lanuza, meanwhile, posed a question to the UP community asking if they are ready for the 2nd Diliman Commune.

Lanuza furthered that even if accord is truly abolished and neglected, it is not the accord which would struggle to uphold the safeguard of UP community.