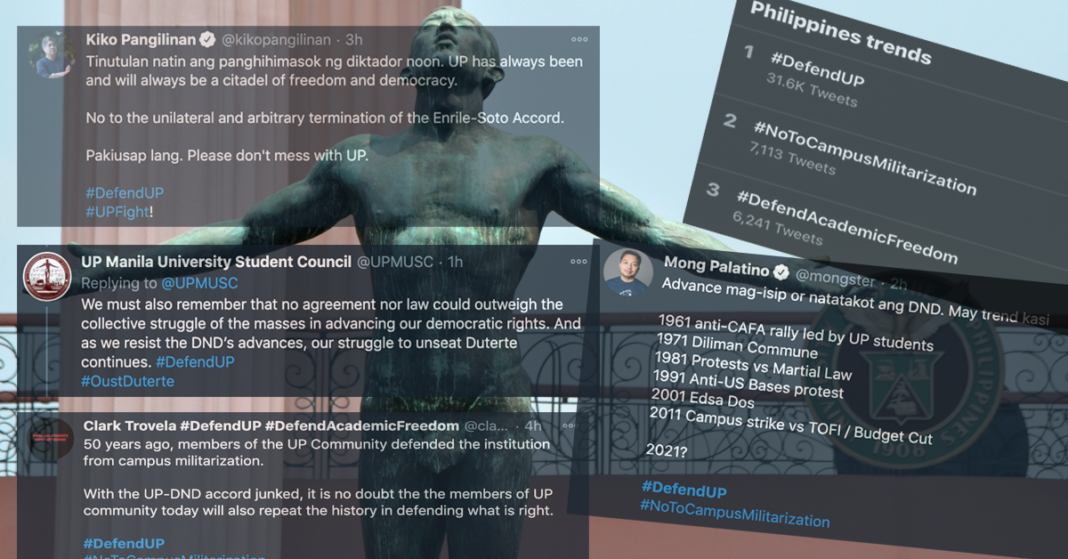 #DefendUP peaked 1st and made rounds on social media platform twitter, January 18, following the released letter from Department of National Defense (DND) Secretary Delfin Lorenzana saying that the UP-DND accord agreement is terminated effectively January 15, 2021. The letter was addressed to University of the Philippines President Danilo Concepcion.

UP-DND accord is an agreement that bars state forces from entering the premises of the University. The agreement was signed on June 30 of 1989 in Quezon City between former UP President Jose V. Abueva and back then Department of Defense secretary Fidel V. Ramos.

According to the letter filed by DND Sec. Lorenzana, he cited that the department is aware that there is an “ongoing” recruitment in the said university by Communist Party of the Philippines and New People’s Army.

“This department is aware that there is indeed an ongoing clandestine recruitment inside U.P campuses nationwide for membership in the CPP/NPA.” Lorenza, said

Even #JunkTerrorLaw hurdled among the trends incorporated with sentiments as to regarding the worsening political situation in the country.

Different campus branches of University of the Philippines’ student councils released statements to express firm indignation against this blatant attack to the university.

University of the Philippines Manila Student Council (UPMSC) related the adverse effects of the 1989 accord termination to the controversial Anti-Terrorism Law.

“The dangers that come with the termination of the UP-DND Accord are even amplified with the implementation of the unconstitutional Anti-Terrorism Law. When the state has exhibited unrelenting disrespect for human rights, our trust rests anywhere but the very institutions supposed to protect us,” said UPMSC

UP Baguio Students council challenge UP president Danilo Concepcion and UP Administration to uphold students’ democratic rights by refusing the unilateral agreement and its grave implications.

A mass mobilization to condemn the termination of agreement is slated tomorrow January 19, at Quezon Hall UP Diliman at 10 AM.