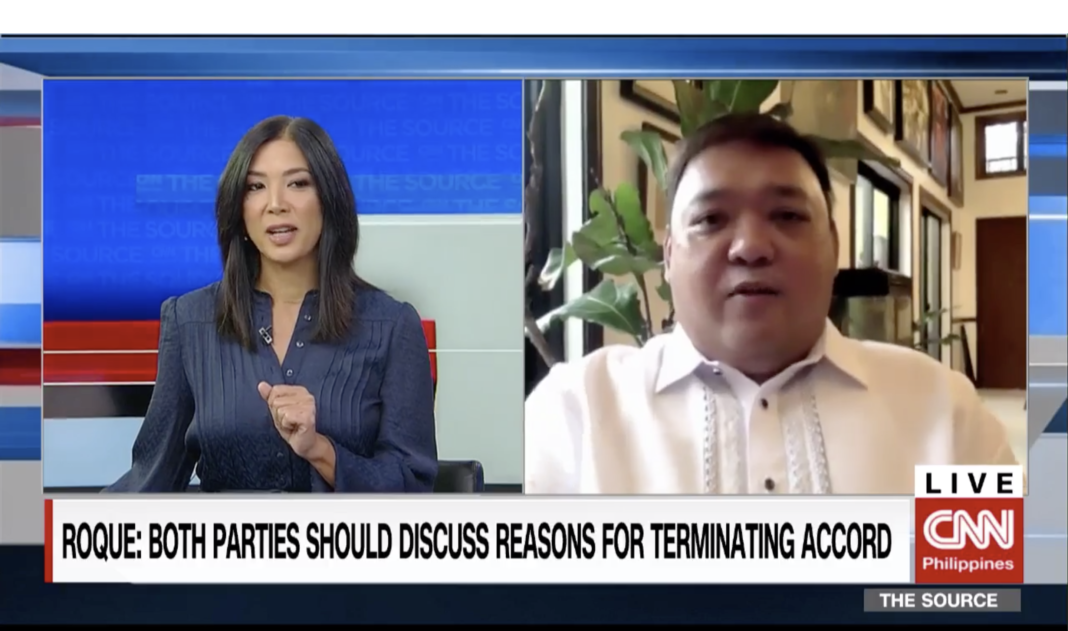 President spokesperson Harry Roque seemed to have lost his temper in an interview when CNN Philippines’ The Source host Pinky Webb asked for his reaction if he would denounce a “challenge question” twitted by UP journalism professor Danilo Arao as regards the UP-DND issue.

It must be emphasised that the presidential spokesperson was asked for a reaction, and he did react accordingly.

It did not sit well to the former UP law professor and human rights lawyer now the presidential spox and lamented that Webb was ‘unfair’ when she made him respond about his “honor and excellence”, deeming that the posed question “implies” that he should follow what the journalism professor said.

Roque, however, did reply primarily saying that he will offer his “good offices” to facilitate a table meeting between DND secretary Delfin Lorenzana and UP President Danilo Concepcion.

“All I’m saying is let’s talk about this, I support the steps of the UP President, and let’s see why a 30-year-old accord should not be continued when it has worked, apparently perfectly well, in the past 30 years. I’m not duty-bound by anything that Prof. Areo says,” the presidential spox added.

Meanwhile, just after a quick commercial break, Roque berated Webb for not being fair over asking such question.

“I have to highlight the fact that I think the question on Arao was unfair. In the first place, why am I duty-bound to follow anything that Prof. Arao says?” Roque interjected.

Roque mused that Webb made it appear as if it was compulsory for him to follow it.

“Don’t get me wrong. I’m not saying you were duty-bound.” countered Webb, saying that she was not implying anything ‘unfair’.

He furthered and asked for Webb’s basis in which she replied that it was only a tweet that she read to ask for the presidential spox’ reaction.

“Just to very clear about this, it was a tweet that I read. And I asked for your reaction if you would denounce it. And then after that—”

“But you said I had to follow him, and if I did not do as he did then I have no honor or excellence,” Roque quickly intervened.

“Is that a fair question? That’s not,” quipped Roque.

Webb then replied, “Okay then. If you say why should you answer it, and if you answered it that way, sir, then I would have to take it as is. It was just a challenge.”

“Yes, but you’re pushing the point, going beyond asking for my reaction. It’s not just you asking for a reaction, you were pursuing, ‘Will you denounce?’ You said it on record, the TV recorded it. You have to be fair.” Roque furthered.

The live interview went as far as Roque accusing Webb, but the latter has remained calm and professional.

With full composure, the CNN anchor asked one last question for Roque if how would he like to close the topic.

“I have said it, I have never experienced being in UP with soldiers or military. And I’d like to facilitate the discussion between the UP President and the Secretary of National Defense,” Roque affirmed.

“I’m offering my good offices for them to have this discussion,” he reiterated.