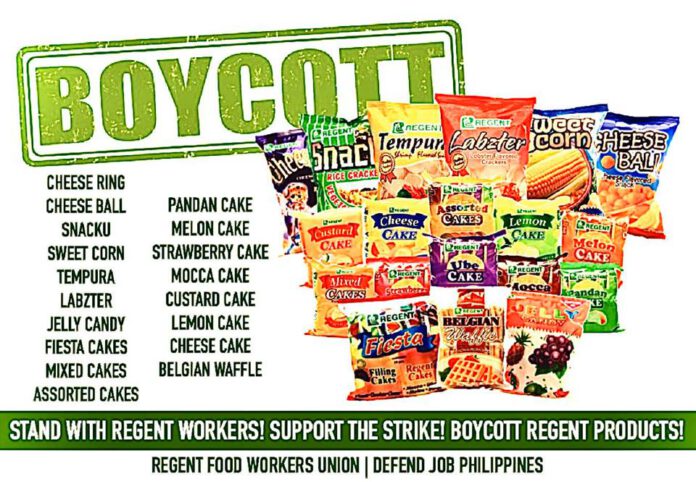 On the second day of their strike yesterday, Regent Food Workers Union (RFWU) called on the public to boycott Regent Products until the issues raised by the workers for holding their strike will be resolved and addressed by their management.

On October 16, 2019 at 11pm, more than 500 Regent workers went on strike and paralyzed the operations of their two plants in Kalawaan, Pasig City and Tipas, Taguig City.

“We call on all consumers in the country and even abroad to show their support and amplify the grievances and demands of the Regent workers and their strike by not buying and supporting Regent products until the issues of the workers have been resolved,” said Defend Job Philippines in a post, in solidarity with the earlier call made by RFWU.

Apart from the issues of low wages, unpaid benefits, unfair labor practices, and right to self-organization, RFWU said that the strike was triggered by the attempts of the company to runaway its shop and move to lockout its factory.

RFWU President Tita Cudiamat said most workers have been with the company for more than 20 years but remain as contractual workers or paid by piece-rate or ‘pakyawan’ and works for 12 hours a day.

According to Cudiamat, they formed a union in 2017, after management cut the wages of those paid piece-rate in half. They found out that a management-backed union is already registered, appeared to be non-functional, with a president who is already deceased and officers all resigned from the company. The collective bargaining agreement (CBA) it signed with management is ‘blank,’ according to Cudiamat. The workers held an assembly and elected new officers, where Cudiamat was elected as president this month, but the owners did not recognize the new union officers, who then wanted to table the CBA anew.

The operations in the said plants of Regent Foods Corporation (RFC) have stopped for the third day, as members of the RFWU blocked the four gates of their factories. Workers claimed that the owners are losing millions per day of work and production stoppage.

Three hearings have been set before the workers secured a notice of strike from the Department of Labor and Employment on October 17, but the management failed to attend the three hearings.

RFC describes itself as among the country’s top snack food manufacturers.