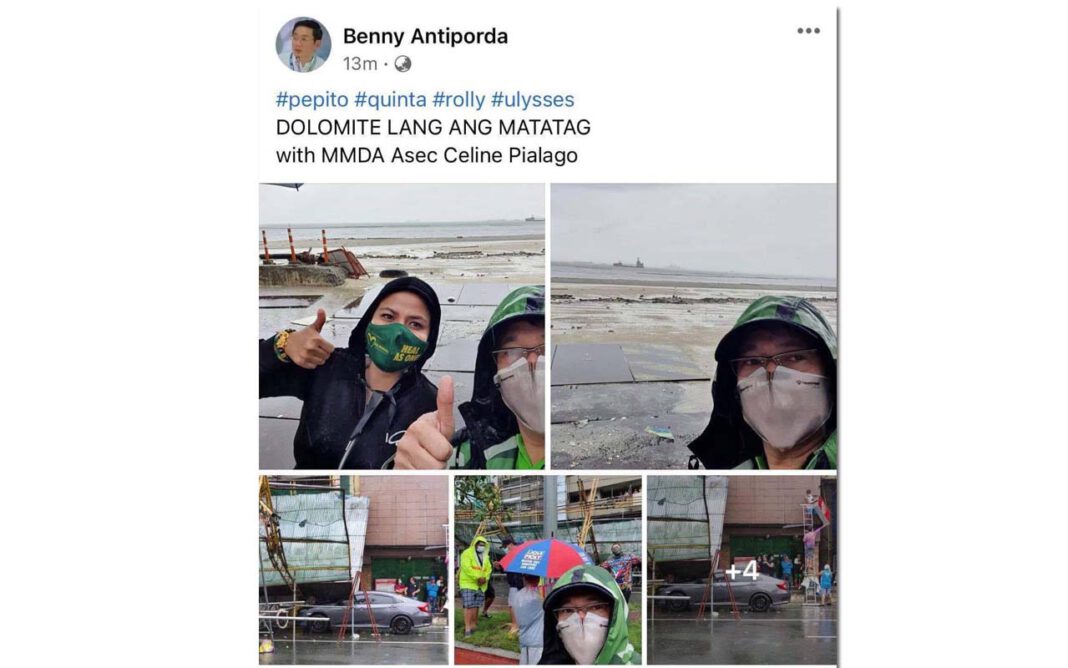 A duo of government officials tried to give the Manila Bay dolomite white sand some good PR amid cries for help and rescue.

“Dolomite lang ang matatag,” Antiporda captioned his post, apparently saying the dolomite white sand dumped in Manila Bay withstood these typhoons, while structures in the other photos in his post did not. Antiporda used the latest typhoons as hashtag to his post – #pepito #rolly #quinta #ulysses – possibly a rebuff to #KapitLangDolomite that repeatedly became a trending topic on social media during typhoons.

Many saw the post as reaction to the monitoring and reporting of netizens and media outfits on the aftermath of typhoons in the dolomite white sand, given many environmentalists and scientists have said the white sand is unsustainable as it is not natural and would be washed out by storms. But Antiporda said the white sand was not “washed out”, but the black sand was “washed in.”

Earlier today, Marikina Mayor Marcelino Teodoro called on MMDA to open the gates at Manggahan Floodway for the flood to subside in Marikina. Marikina river level rose beyond the dreaded 2009 typhoon Ondoy’s level of 21.5m, reaching 22m this morning.

Also earlier, a video of what looked like MMDA flood control heavy equipment was washed away in the Marikina river and hit the bridge in front of SM Marikina.

Aside from this photo or flood alerts in its Twitter account, we have yet to hear from MMDA or Pialago who is MMDA’s spokesperson.

Pialago was criticized for her “insensitive remarks” on the burial of baby River Nasino, firstborn of political prisoner Reina Nasino, that was “hijacked” by security detail for Nasino’s furlough. Pialago stood by her statement, despite clarifying how her “drama serye” reference to the burial did not pertain to Nasino, but to critics who are “riding on the issue.” Pialago, whose office or duties had nothing to do with the case of Nasino, was told by netizens that she herself was riding on the issue.