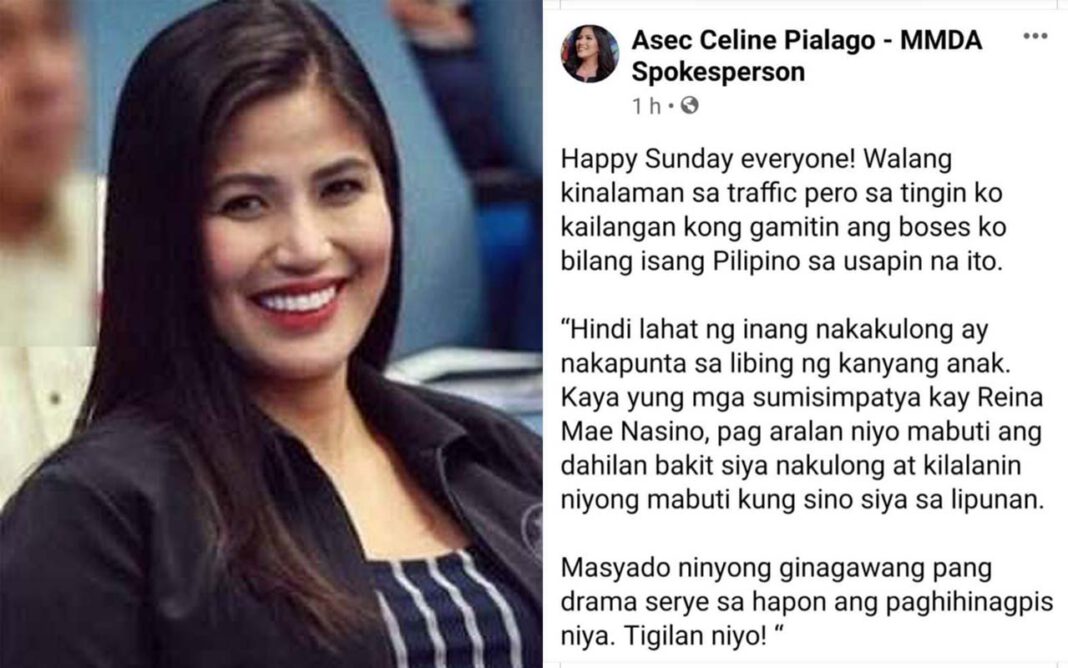 “We assure the good Philippine Army Multi Sector Advisory Board Member that we will do the same thing if she was in Ina’s position and circumstance. To start with, we will never ever wish this horrible tragedy and injustice to visit the Army advisor, her mother, her daughters, her sisters and her aunts,” said NUPL President Atty. Edre Olalia.

[We condemn officials like MMDA who even insult the family.]

Political prisoners’ kin group KAPATID commented on Pialago’s post that what happened to Nasino and baby River is not a “drama serye” but “a real story that exposed the countless injustices committed by the government.”

“Words and actions that debase what happened to the 23-year-old political prisoner and her dead child are desperate attempts to cover the government’s gross violation of human rights,” said KAPATID in response to Pialago’s post.

“MMDA Chair Danny Lim, a former political prisoner himself, should have long shown the door to his spokesperson. It should be obvious by now that sensitivity cannot be taught nor proper manners and right conduct if one is empty-headed,” said the group.

Netizens, including celebrities and professionals from various fields, condemned Pialago’s post. Some demanded Pialago to apologize to Nasino and her family.

Netizens also scored Pialago’s replies to comments in her post and other posts relating to her rebuke of Nasino’s activism and baby River’s funeral and burial.

Some also dug up her pass occupations to her present roles in the administration.

Pialago was also compared to other appointees of President Rodrigo Duterte.

Netizens also threw back Pialago’s ‘passed away’ beauty pageant faux pas and turned it – or Pialago herself – into a meme.