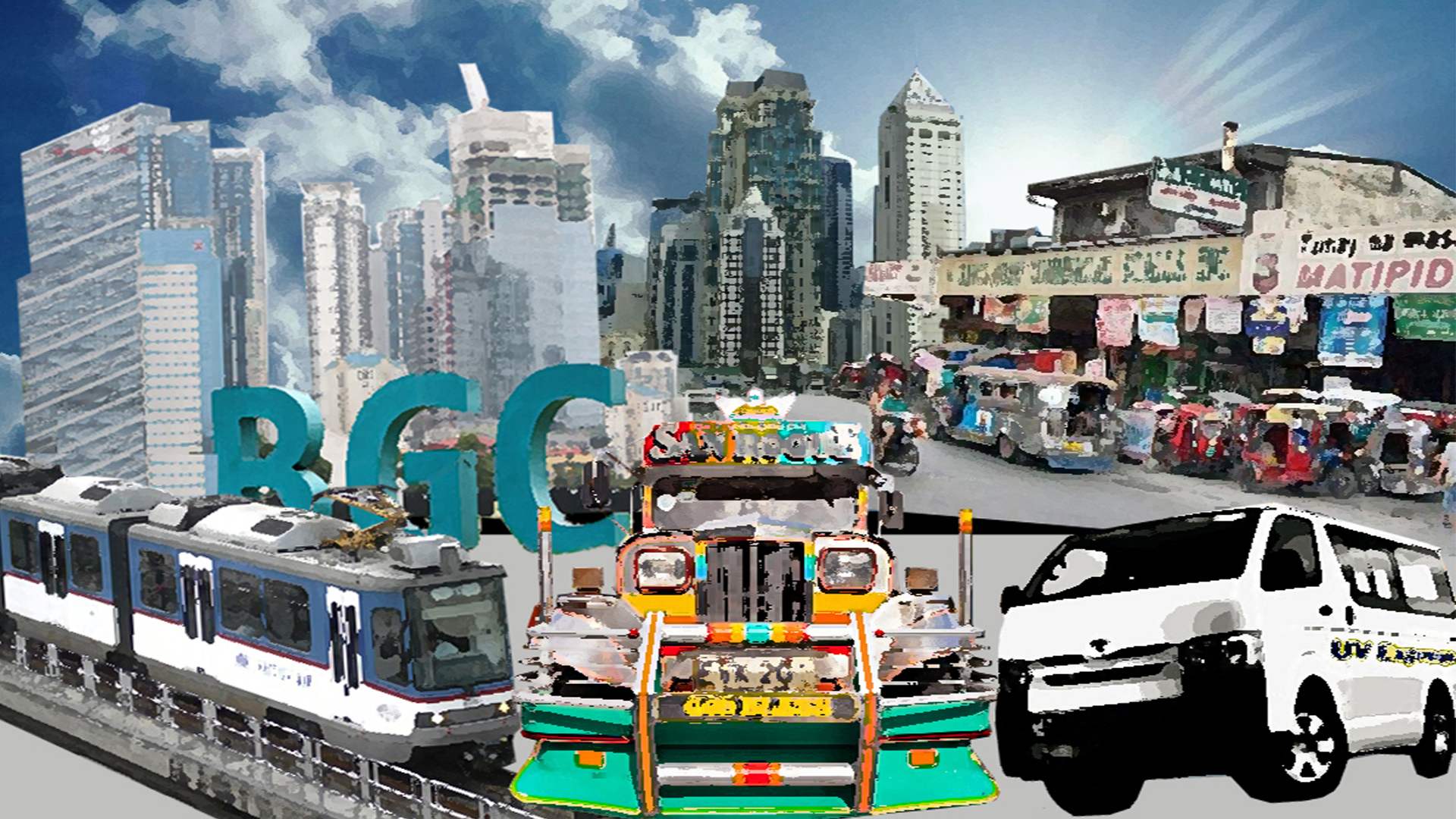 Distinguishing the public from private spaces in Metro Manila is quite confusing. Consider these examples:

Balintawak Market is privately-owned yet we consider it a public market. In fact, Metro Manila’s biggest city has only one government-owned and managed market.

Jeepneys and FX taxis (or now more popularly known as UV Express) are public utility vehicles (PUVs) but the government does not give subsidies to their private operators. These are operated to generate household incomes to huge company profits.

Public trains are bequeathed to government by the original foreign builders and operators and now operated by private corporations that the government had given one too many guarantees. These guarantees include that the private contractor would get the profit they want, that they could demand a fare raise as much and frequently as they wanted and government should pay the difference if the fares are not raised to the amount they demanded and many others.

Tollways are public projects but they were built, operated, and maintained by a few corporations composed of the triumvirate of the government, local business and foreign investor. Using this type of corporation for this build-operate-transfer scheme, a precursor of the public-private partnership, was orchestrated to comply with the constitutional requirement of corporations being majority Filipino-owned and run. Millions of profits through decades of steadily rising public toll fees have gone to the coffers of the government’s public counterparts, while there have always been speculations that it is the foreign investors that truly own these corporations.

What is the category of Bonifacio Global City? A city within a city, a former military base before its conversion into a high-end business and commercial center.

Similarly, Ayala Triangle is a private property of an old Spanish clan but it is open to the public. Sometimes, even political protests are organized here.

There’s a curious, ambiguous term used by many people: semi-private. What does it mean especially when used to describe a hospital or school? That it is a private company but offers cheaper fees? Or that it is public but the services and amenities are comparable to the ones provided by the private sector?

There’s another curious term, perhaps one more familiar inside our public hospitals: micro-private. In the case of our government hospitals, this refers to a service that is purely privately-owned within a public hospital. An example of this would be the high end and not-so-high end technologies and equipment that the government does not have or invest and that could not be catered for free or even at a discounted rate for indigent Filipinos for the sole reason that a private company, and not the government, owns them.

Perhaps the issue doesn’t matter anymore since everything today ends up being privatized. Most of government-funded institutions have become prime targets of corporate takeovers. Public services are outsourced to profit-oriented companies in order to “pursue modernization and efficiency.”

But did the selling of government properties really serve the public interest? Or did it merely facilitate the transfer of tax revenues to the financial elite?

If in the past a public agency is seen as brutally disorganized, the first remedy is to overhaul it. Privatization is the last resort, and in most cases a non-option. But today, even self-sufficient government-owned corporations are sold to the highest bidder. The government is aggressively promoting privatization while creating favorable policies that deepen the influence of the private sector in all matters of governance.

The result is the dominance of the corporate ethos in policymaking and development planning. It seems that the private is the new public. The public exists to make money for the private corporation. And under the new order, the government is the most effective tool to enforce the needs of the free market.

One overall result is a Metro Manila that is retailed out to the fashions of the highest bidders or wealthiest corporations. There is grossly no urban planning. Not even a system that best caters to bolster these free market designs such as an effective transportation system, better traffic flow, fast internet, etc.

The absurdity of our situation today is evident through the Electric Power Industry Reform Act that prohibits the government from building a power plant in order not to distort the competitiveness of the market.  The all-powerful government can construct a waiting shed or basketball court but it is forbidden to generate and distribute power to its citizens. What horse manure is this!

That is why it is essential to recapture the idea of the public and clarify or even limit the role of private capital in society.

Basic social services such as health, education, and transportation should remain in the hands of the public. And if a vital industry or sector is under the control of a private company, the state should intervene to break the monopoly. The government should maintain its leading role in the economy.

But the policy prescriptions enumerated in the preceding paragraph are considered taboo under the dominant neoliberal ideology. In fact, the governments of the past three decades have faithfully and fanatically espoused neoliberalism as the country’s development blueprint.

Through state-backed neoliberal propaganda, many people today are dangerously embracing the idea that rapid job creation can be effectively done by offering tax incentives and exemptions to capitalists. That labor rights must be curtailed to entice investments. That the private sector or capital must have the freedom to move in and out cities. That state regulation is abhorred except the ones that boost the dividends of shareholders.

The great success of neoliberalism is to turn citizens into consumers, make public interest compatible with market interest, and persuade the government to promote the corporate agenda.

Metro Manila’s spatial restructuring in recent years was largely influenced by the rise of neoliberalism. Politicians, urban planners, and neoliberal fundamentalists conspired to obtain prime lots in the nation’s largest urban region that can be transformed into so-called business-friendly spaces.

Resettlement housing villages can be rezoned into commercial centers overnight. The urban poor can be displaced from their homes if their land is suddenly targeted for real estate development.

An idle land will remain idle until it becomes a strategic location for developers and contractors. The empty lot could have been used to construct a school, health center, or playground for children but local authorities are more interested to convert the property into a profitable venture in partnership with election campaign donors. Public parks are integrated into the medium-term plans of cities if feasibility studies require them to be developed in order to enhance the local business competitiveness.

Land conversion or modernization is done primarily to attract investors and not to improve the delivery of services to citizens.

For example, the methodical destruction of public markets in Manila is justified as an act of modernization, a change of management that will ostensibly redound to the benefit of the community. Essentially, it is free market doctrine which is at work here. It means the demolition of public markets so that consumers can have the ‘freedom’ to choose between Save More, Puregold, and other corporate-owned supermarkets.

Even the unlamented decline of Metro Manila’s manufacturing hubs is a legacy of neoliberalism. The country repudiated domestic production in favor of free trade or trade liberalization. Factory shutdowns coincided with the government’s sustained push for tariff reductions which led to the dumping of cheaper imported goods to the detriment of local producers.

Today, industrial centers are being converted into malls, condominiums, and call center offices to cater to the service sector economy. This trend is praised as a visible sign of progress but it masks some serious evils such as the pauperization of the working class, the displacement of the very poor and near poor, the phenomenon of jobless growth, the incestuous ties of corrupt politicians and tycoons, the deliberate dismantling of domestic industries, and the total loss of public control over key city spaces.

Corporate-led development is presented as a better and rational alternative over the wasteful and clumsy style of government-led planning. Perhaps it is true but only if we accept the assumption that all development schemes must generate unlimited profits.

Yes, many public projects are notoriously substandard but at least we can make the government accountable. Citizens can demand greater transparency and responsibility. But how do we fulfill these civic duties if the parties involved are faceless corporations which are not elected by the public? How can we reclaim our cities and our future if capitalists own everything in the community and everyone in the upper echelons of the bureaucracy?

The neoliberal political agenda is an attack against the poor, the organized democratic forces, and the collective aspiration to build a city of the people, for the people, and by the people. The alternative cannot be achieved as long as we do not destroy the hegemonic influence of neoliberalism in society. Perhaps a good start is to strengthen the various collectives that can challenge the reign of capital. Let us do this by asserting the right of the public to reshape society.