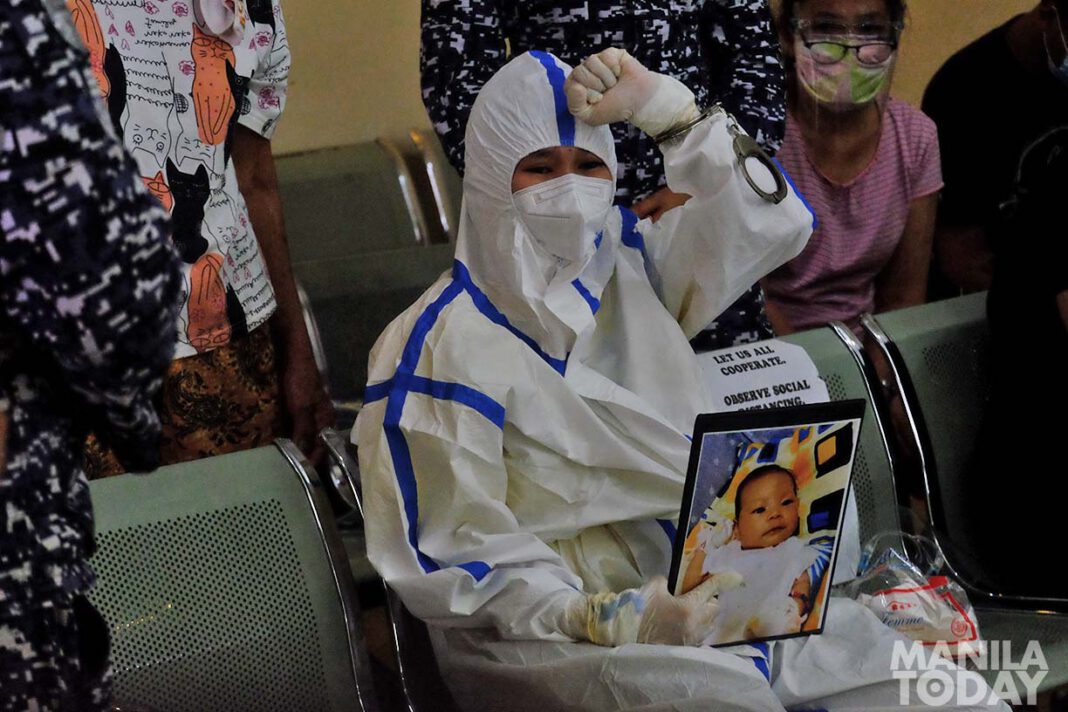 There may be no words to describe the grief of a parent who loses a child, and grieving political prisoner Reina Mae “Ina” Nasino were allowed by police to utter only a few in the first of two 3-hour furlough she was given to visit the wake and bury her 3-month old baby River Emmanuelle.

Why was Ina in jail to begin with? Why she had to suffer jail conditions while pregnant, give birth in a hospital in a day and then go on to live with her baby for a month in jail until the jail and the court had saw to it that they would be separated?

She is an activist.

With Ina’s dedication to continuously defend and uphold basic human rights through mass struggles and campaigns, state authorities arrested her along with the two activists as part of a crackdown against “left-leaning” groups in October and November 2019 under Duterte administration. Some groups identified this crackdown to be part of Oplan Kalasag, the government’s counterinsurgency program in Metro Manila, akin to Oplan Sauron in Negros. These programs were also said to be part of the program of. the National Task Force to End Local Communist Armed Conflict.

It has been almost a year since the three were detained on the basis of illegal possession of firearms. Two other activists in Manila were also arrested in the same fashion and detained under the same charges. The ‘illegal possession of firearms and explosives’ charges has been lambasted by various progressive groups as trumped up charges based on ‘planted evidence.’

Ina is a former student-leader in Eulogio “Amang” Rodriguez Institute of Science and Technology (EARIST) in Manila where she took special opportunity for a vocational program.

It was when the #RebuildTheGymNow campaign initiated by Anakbayan EARIST, which Ina became a member, as their school administration justified the “Development Fee” and “Construction of New Building and Facilities Fee” prior to the reconstruction of Juan C. Laya Gymnasium in their campus. This sparked outrage among students, including Ina, where they staged protests and mass actions against the questionable collection of fees and looming privatization of the said building.

She also led the formation of Musicians for Peace (MP) EARIST where she became part of its executive committee in 2014. MP is a non-profit, cause-oriented organization of musicians and music enthusiasts, united for a just and lasting peace based on social justice.

Growing up in the poor community in Pandacan, Manila along with her two siblings and a mother, Ina witnessed the reality on the plight of marginalized and dirt-poor settlers in Manila, specifically in the areas of Baseco and Tondo, which she began campaigning from the onset.

Ina as a fighter, a mother

Ina recalled how hard it was for her as a first-time mother to deliver the baby stressing about the difficulty, more so that the state authorities put up a separation motion after a month following Ina’s labor.

Two months since Ina’s separation from baby River, they finally reunited only that the baby passed away due to acute respiratory distress syndrome due to pneumonia last October 9.

Ina spent her entire pregnancy in jail conditions amid the outbreak of COVID-19 pandemic. It is important to note that COVID-19 cases have been confirmed in the Manila City Jail (MCJ) and was even referred as one of three most populous jails in the country with 4,916 inmates in 2019. In fact, the Bureau of Jail Management and Penology (BJMP) recorded a 394% congestion rate in 2019.

After giving birth to baby River Emmanuelle “Mikmik” on July 1 at Dr. Jose Fabella Memorial Hospital in Manila, both Ina and the baby were shortly sent back to the prison. Baby River’s condition of having low birth weight and yellowish skin color was attributed from Ina’s struggle to prenatal checkup prior to her nine-months pregnancy.

On April 8, Ina along with 22 political prisoners through their kin filed a petition seeking the humanitarian release of elderly and sick prisoners, and still has yet to be decided by the Court despite KAPATID, a group of political prisoners’ kin, hoped for Chief Justice Diosdado Peralta’s words saying that it can be decided on June 16.

On October 13, hours after the Manila Regional Trial Court (MRTC) Branch 47 Judge Paulino Gallegos granted Ina’s three-day furlough, the Manila City Jail Female Dormitory (MCJFD)opposed and reduced the 72 to a six-hour furlough applicable for two days starting October 14 for visiting the wake and October 16 for attending the burial at 1:00 to 4:00 p.m. only. MCJFD through Jail Chief Inspector Maria Ignacia Monteron further noted that they lacked guarding personnel citing that female dormitory only has 12 personnel serving as escort duty for the dormitory’s 665 detainees.

Meanwhile, this was not the case when Ina arrived at the funeral wake of baby River. In fact, more than 40 police personnel in camo uniform escorted Ina upon arriving and departing the funeral parlor.

Also, there was a commotion when the rank of police officers refused to let Ina be interviewed by media groups.

According to Ina, activism is never wrong. She said that the government only made it clear that they are unjust, heartless, and cruel.

On the other hand, Ina has also left a message to baby River.

Ina, in accordance to the granted furlough, will attend the burial of baby River in Manila North Cemetery tomorrow,  October 16.