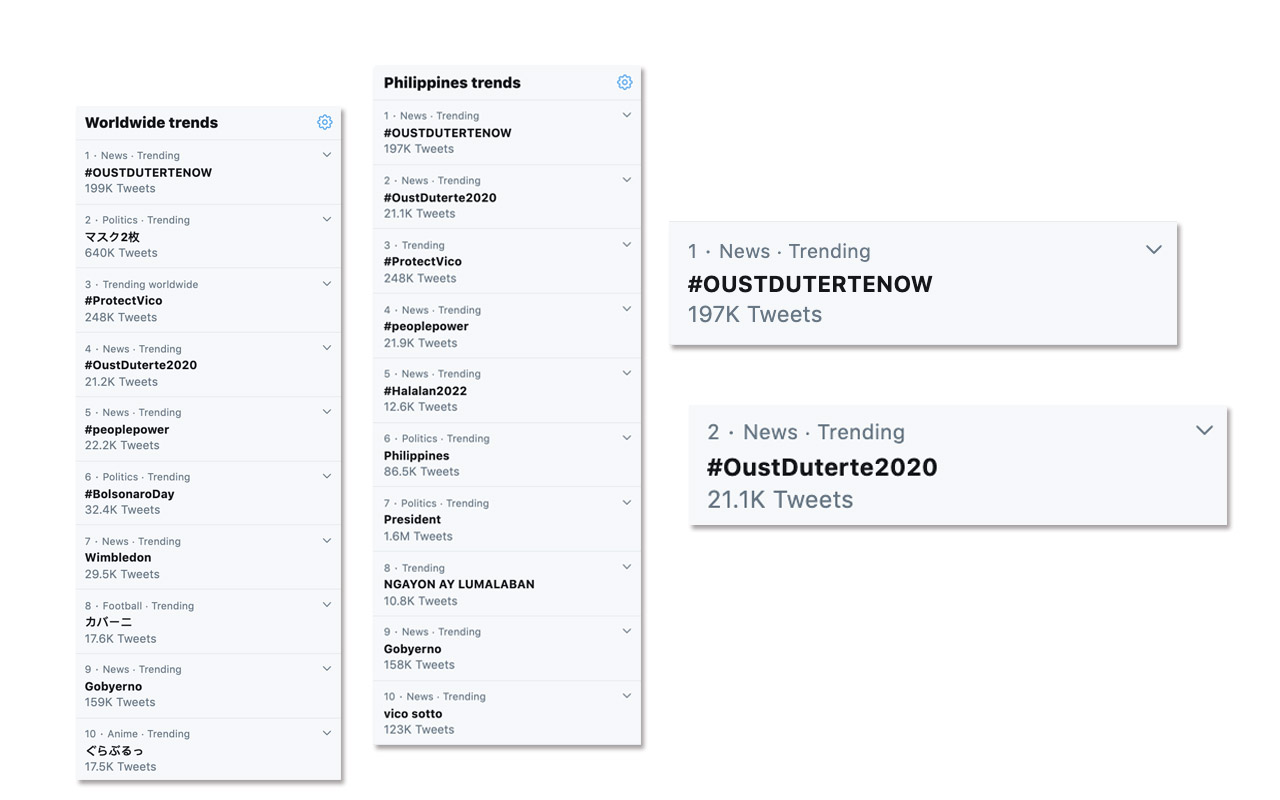 His speech came after today’s protest of people in an urban poor community earlier due to lack of aid from the government. Duterte addressed this incident.

“Huwag ninyong subukan ang Pilipino. We are ready for you. Gulo o barilan o patayan. I will not hesitate to order the police to arrest and detain you. Kapag kayo na-detain, bahala kayo sa pagkain ninyo,” Duterte said.

In Barangay Bagong Pag-asa, more than 150 went out to EDSA, held placards and called for the much-needed aid. Twenty-one were violently dispersed and detained.

The hashtag #OUSTDUTERTENOW trended on Twitter in January when the first COVID-19 case in the country was detected and found the government’s action delayed or wanting. The public thought the president should order a travel ban, but instead said he’d let the Chinese go in and out as usual and the government met to address the crisis only a few days later.

It was almost three weeks since the the total lockdown in Luzon was enforced and a week after the president’s request for additional powers were approved by Congress, along with it the power to move P275 billion in the 2020 national budget as savings to address the COVID-19 pandemic. He addressed people on Monday, March 30, eight hours delayed in the announced schedule, to give his first weekly report on his additional powers. Many were left asking about the concrete plans of the government and the report of expenses incurred.

#OUSTDUTERTENOW and other hashtags became top trending topics in the Philippines and worldwide.

Most tweets on the hashtag expressed their reaction of anger to Duterte’s surprise public address and their frustration with the national government’s incompetence to address the COVID-19.

Yes po umabot na tayo worldwide so i guess i can say we all agree w mr wael ghonim when he said THE POWER OF THE PEOPLE IS GREATER THAN THE PEOPLE IN POWER!!! LET’S GO #OUSTDUTERTENOW pic.twitter.com/Lltevz6hIS

"Violence is the last refuge of the incompetent". – Isaac Asimov#OustDuterteNow

“The power of the people is much stronger than the people in power.” – Wael Ghonim#OustDuterteNow pic.twitter.com/IzRgVC0SI2

The Filipino people are starving and our president’s solution is to kill ANYONE who retaliates.

It’s either we die of starvation, sickness or murder. Our only option is death. #OUSTDUTERTENOW

WHAT KIND OF STUPIDITY IS THIS I’M ????????????? YOU DON’T DESERVE THAT POSITION. STEP DOWN DUTERTE. #OUSTDUTERTENOW pic.twitter.com/0QWZKS7obF