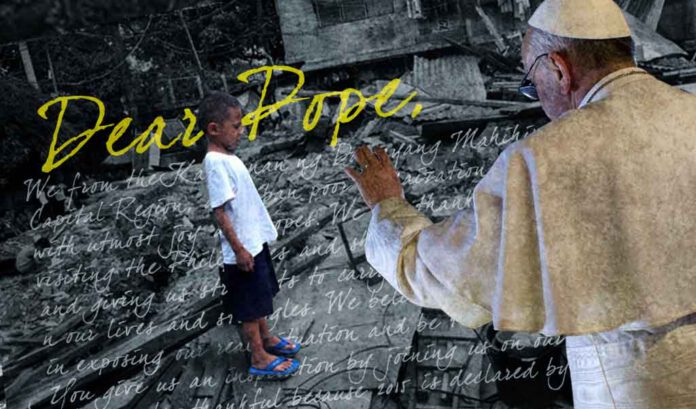 We are from the Kalipunan ng Damayang Mahihirap-National Capital Region, an urban poor organization. We welcome you with utmost joy and hope. We wish to thank you for visiting the Philippines and sharing with us our suffering and giving us strength to carry on our lives and struggles. We believe that you can help us in exposing our real situation and be the voice of the poor. You give us inspiration by joining us in our struggles. We are also thankful because 2015 is declared by the Catholic Church as the Year of the Poor—a year we hope that our voices for justice be heard and amplified.

We hope for a better place and living condition in the urban centers like Metro Manila. Yet we are saddened by the the same situation confronting us such as joblessness and this is worsened by the state’s anti poor policy such as violent evictions and demolitions of our livelihood and communities. One (1) in every four (4) residents in Metro Manila is tag as an informal settler or squatter by the government. This is around 12 million individuals or 556,526 urban poor families.

We strive to make a living just so our families could survive. The state does not give us decent work, so we work as waste pickers, porters of different goods in the market, as construction workers, as household help, as street vendors . We strive very hard to live; we buy food and water and pay for our children’s schooling, house rent, electricity and transportation expenses.

We are gravely affected by the economic policy of the Aquino government such as the Public Private Partnership which is putting our country in the hands of giant businessmen. Our homes and communities are demolished. While the few rich people are now the ones living and making profit in our former lands and homes. Indeed, we are not included in what they say “development”. We are thrown in remote areas and in the countryside in what they called relocation sites—a huge housing business of private companies and the government. These government housing areas are very far from our livelihood and work, which lack basic  social services. This is main reason why we are strongly resist demolition and offers to transfer to relocation sites. It is very painful to witness how our fellow urban poor are wandering, seeking food and shelter in the streets. We believe that this runs counter to the teaching of the Church in valuing human life that God gave to us than any material things.

We believe that this kind of system and economy that our government is implementing, the neoliberal economy is the reason why we are poor and become poorer. Four million families are hungry everyday and 12 million Filipino without jobs and millions of peasants do not have their own land to till. This is an economy of exclusion and inequality. An economy that kills the productive forces of our society— the workers and the farmers.

[quote_center]We believe that this kind of system and economy that our government is implementing, the neoliberal economy is the reason why we are poor and become poorer.[/quote_center]

We’ve learned from our allies and friends that you joined the poor people in Argentina and in many parts of the world. We also hope that you can do the same in the Philippines. We are one with you in exposing and fighting neoliberal policies in the world. We share the same vision in urging states to value the sanctity of life and respect right to life, right to development, right to human dignity. We call that all evictions and demolitions be stopped. We call for decent jobs and most importantly genuine land reform and industrial development. Finally, we hope that human life and mother earth be protected by everyone.

For the urban poor,