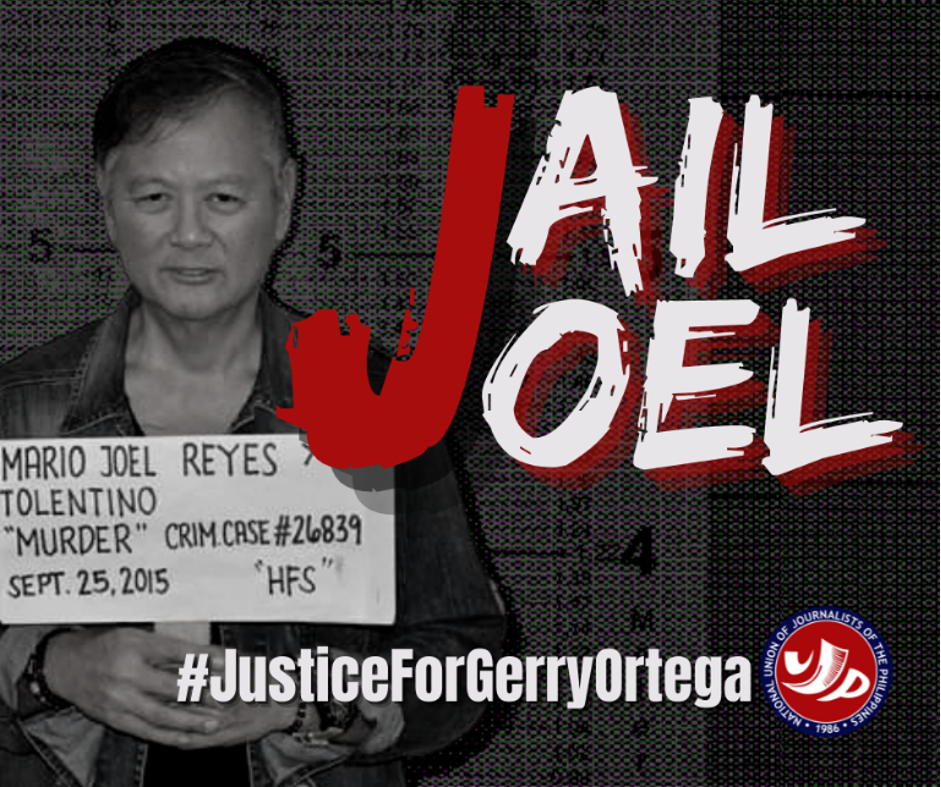 The National Union of Journalists of the Philippines (NUJP) demanded the arrest of former Palawan governor Joel Reyes, one of the primary suspects in the murder of broadcast journalist Gerry Ortega.

In a statement released on Ortega’s 11th death anniversary on January 24, NUJP stated that Reyes is eyeing to reclaim the Palawan governorship despite being convicted for graft and having an arrest warrant for murder.

“In a brazen move, not only is former governor Joel Reyes evading his warrant of arrest for Ortega’s killing, he is running for Palawan governor, according to news reports, and is campaigning while a subject of a manhunt.” said the Union.

Ortega had just finished the final broadcast of his radio show for DWAR-FM when he was gunned down near his veterinary clinic in Barangay San Pedro, Puerto Princesa, Palawan. His killing had been connected to his critical commentaries on Reyes’ involvement in the Malampaya funds misuse.

“Reyes, convicted for graft, was released from prison due to still unclear reasons. What is clear is that due to a Court of Appeals directive in 2019, the Regional Trial Court of Puerto Princesa had released an arrest warrant against him for murder,” the Union added.

The ex-Palawan governor, along with his brother former Coron Mayor Mario Reyes, were implicated in Ortega’s murder in 2012. They went into hiding for three years before they were captured in Phuket, Thailand in 2015.

The Union added that the lack of justice over Ortega’s death and Reyes’ electoral bid despite a graft conviction feeds to the impunity that has surrounded attacks against journalists as well as land and rights defenders.

“The case of Gerry Ortega is emblematic of the culture of impunity in the country. It reminds us how the powerful seem to make a mockery out of our justice system.” NUJP asserted.

The union expressed their support for Ortega’s family, colleagues, and friends in the environmental movement and media in calling for justice on Ortega’s death, and in demand for the service of the arrest warrant against Reyes.

“As we commemorate Doc Gerry’s death, we call in voters to junk candidates who violated press freedom and challenge all candidates to respect and uphold the people’s right to access relevant and timely information as well as their right to criticize government policies and practices.” the Union stated.