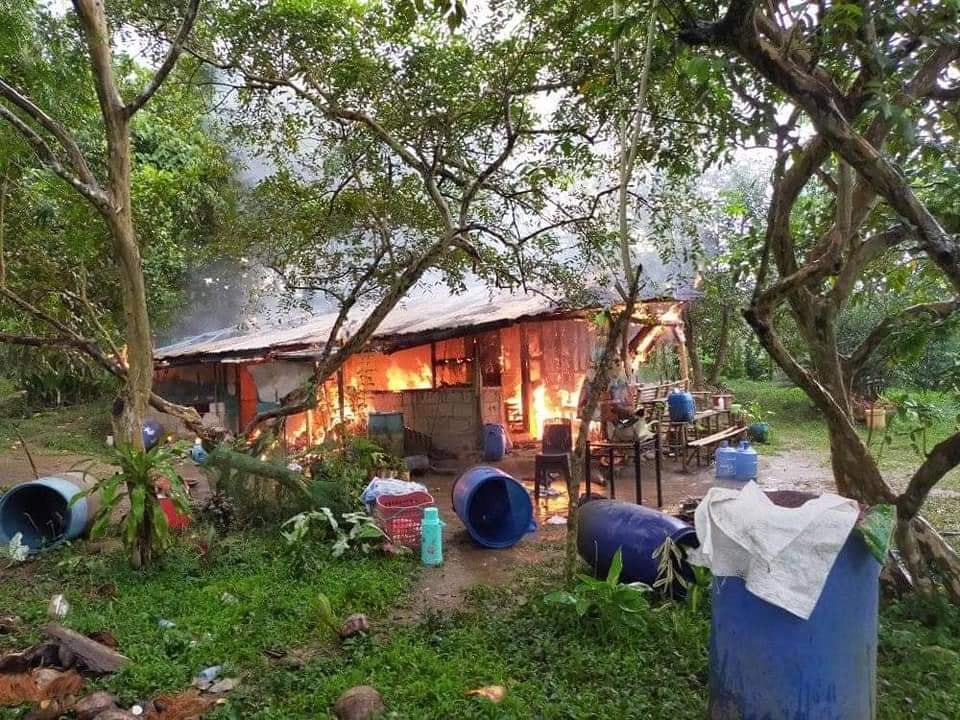 This was how Dorothea Marasigan Manggubat, or Nanay Iyang, described their plight as residents of the Hacienda Yulo.

For most of her life, and including her ancestors’ life, Hacienda Yulo have always served as their own sanctuary and their own home, way before the land came under the ownership of the Yulos.

Being landless farmers who descended from the original tillers of the hacienda should have supported their rights to live in these lands, as based on the country’s agrarian reform laws.

However, Nanay Iyang, as well as her fellow landless farmers, were still subjected to violence, intimidation, and harassment from landowners, state forces, and hired armed groups.

On January 24 last year, before the vaccines arrived and amid the worsening pandemic, a group of armed men reportedly burned the houses of two farmer families living in the hacienda. A Bulatlat report even stated that if it were up to these men, the families would have burned along inside their homes.

Hacienda Yulo was their paradise and safe haven for a long time. Now it has become a stuff of deathly nightmares.

A century’s worth of landlessness and struggle

In Tudla Productions’ short documentary titled “Hacienda Yulo”, we see Nanay Iyang and Tatay Peter narrate these horrid experiences: the coercion, harassments, and human rights violations that they were subjected to thanks to the failures of the Comprehensive Agrarian Reform Program, as well as the remaining existence of a land monopoly in the country amid a modern century supposedly rid of feudal systems.

The short documentary focuses on the brief history of the struggles of farmers living in Hacienda Yulo. During the Spanish colonial period, Canlubang was basically a virgin forest with civilizations around the rivers and slopes. It was said that farmers planted rice, coconut, and fruit trees in the area.

The ownership of the land went around religious orders until it settled on the Dominicans in 1831. Meanwhile, sentiments and struggles against the feudal system of this period have started to develop due to the Philippine Revolution. But it was only during the American colonization period when the Dominican ownership were finally rendered void, and ultimately removed.

For a time in between these periods, the land of Canlubang stayed untouched until the Taal Volcano’s eruption in 1911 caused farmers from Talisay, Batangas to migrate to other provinces, including the now known Sitio Buntog. This was only a forest by then. And these farmers started to then cultivate the lands, turning Sitio Buntog soils productive.

Nanay Iyang narrated in the documentary that her ancestors were one of those farmers that arrived in Sitio Buntog more than a hundred years ago.

On the other hand, the arrival of the American colonial period brought forth the interests of Americans toward the lands of Canlubang. It was a time when American businessmen have started to take their business interests in the country due to cheap labor and vast arrays of agricultural lands.

American group based from California called Ehrman Trust found Canlubang as the most suitable place to start their sugar business, and this had led them to own titles and ownerships of vast lands in there, eventually becoming the Canlubang Sugar Estate. The residents of Canlubang then became farmers and workers of the sugar plantation.

And in 1927, Jose Miguel Yulo became the American group’s legal counsel. He then went on to become the estate’s caretaker.

The damages and effects of World War Two have led to the estate being under the ownership of Vicente Madrigal. Madrigal, who wanted to escape from the outrage of peasant unrest (being one of the war’s aftereffects), then sold the sugar plantation to Jose Yulo.

And the rest was a history of never-ending coercion, threats, violence, manipulation, and overall exploitation.

An injustice frozen in time

Living in 2021 in the midst of all social justice turmoil and awakening in the world, sadly did not lead to progressive changes when it came to the plight of farmers in the country. The existence of haciendas and landholding still marks the remaining traces of feudal system in Filipino society. And with these traces, comes the lawless response in the assertion of human rights and livelihood.

As Nanay Iyang narrated how their houses were burned by the Seraph Agency, she called their leader by this very distinct name: Kamatayan. In English, death. She also likened the agency to Satan or Lucifer as the documentary focused on the fires itself, almost bringing to life the symbolic incarnation of evil whom they were describing.

In the Filipino language, he recounted, “…We were about to receive some relief supplies, there were three of us. Kamatayan’s squad appeared and pointed their guns at us, asking us where we were going. My companion said were about to get some relief.”

His legs shaking in fear from the flashback, he continued, “Kamatayan asked, “Why, are you hungry? Don’t you have anything to eat?” While they were pointing their guns, we were made to stand side by side, and they made us take off our masks.

They then took pictures of us so they would remember our faces, and make it easier for them to kill us.”

After the group led by Kamatayan took pictures of Tatay Peter and his companions, they were taken to the armed group’s outpost. The three hoped that they would finally be released, instead, they were subjected to a series of physical assaults.

“I lost a tooth from one of the blows… My companion also received blows to the stomach. Really, if you speak up, you will be targeted,” Tatay Peter said, wiping a tear off his eyes, the trauma visible on his worn face.

It seemed that the same realization had lingered on Nanay Iyang’s mind as her voice started shaking while she talked, doing her best at restraining the tears that threatened to show up.

“Paradise is gone, and has become hell. It became paradise for the rich,” she said.

Nanay Iyang and Tatay Peter are only one of the staggeringly high amount of Filipino farmers struggling today – from the effects of Rice Tarrification Law leading to ridiculously low prices of rice, the generally low allocation for the agricultural sector in the national budget, and most of all, the legal ambiguities of the Comprehensive Agrarian Reform Law; which farmers’ groups had classified as a “bogus” law.

Moreover, the Land Use Conversion included in the agrarian reform law could lead to adverse effects for the country’s food security as it aims to convert agricultural lands for non-agricultural uses, such as subdivisions, and other commercial infrastructures.

If it were up to the pure, non-malicious intent of the law spared from legal loopholes, perhaps the Comprehensive Agrarian Reform Law could have protected Nanay Iyang and Tatay Peter from the nightmares of their current plight. As Nanay Iyang argued, the law would have been on their side.

Sadly, justice had always been in favor of the rich. In this case, of the landowners.

And whilst different administrations have supposedly tried to solve the growing monopoly of land ownership in the country, as well as “understand” that the social justice in redistributing lands to farmers plays a huge role in alleviating the nation’s poverty, unfortunately, a reform law that is not genuine to begin with is simply doomed to fail.

As an example, a Bulatlat article reported that Yulo, during the Marcos Administration had used his government position and power to “sidestep” the land reform law at the time. His closeness to Marcos resulted with the reform law exempting sugar estates. This, and he also profited off the national government’s industrialization plans and infrastructure projects by converting parts of the hacienda to industrial and residential areas.

Coming back to the present times, the Department of Agrarian Reform back in July claimed that the beneficiaries of the Agrarian Reform program had already been given their Certificates of Land Ownership Award (CLOAs), and this includes the Yulo landholdings. According to them, landholdings listed by the Kilusang Magbubukid ng Pilipinas were no longer “owned by capitalists or landlords” and that they “have been issued the requisite Notices of Coverage (NOCs) by the DAR.”

However, there have been cases when farmers who already received the CLOA are not really in actual possession and control of their lands.

KMP chairman emeritus Rafael Mariano debunked DAR’s claim in a Bulatlat article last August, citing the investigated case in Hacienda Luisita where it was found that 83% of farmer beneficiaries no longer possessed nor controlled their awarded lands.

Mariano called for the agency to ensure that awarded farmers were still the actual owners of their lands, not just by paper, saying that “It has been too easy for DAR to show off CLOA distributions as successes, but whether the farmers retain possession and control over the awarded lands long after the ceremonies is a wholly different matter.”

If the DAR’s claims were true, the question remains on why and how the farmers and farmworkers in Sitio Buntog were still being harassed and subjected to acts such as arson by armed men from Seraph Agency.

It’s also important to note that the original intent of agrarian reform is to solve rural poverty and boost the economy by redistributing the ownership of all agricultural lands, including large private ones, to landless farmers and farmworkers.

However, this is not the case for the country’s CARP as not all farmers are considered beneficiaries unless they apply and undergo screening. And even then, they will still be subjected to payment for thirty years; amortization fee and rent to landlords.

Despite being a promising legislature, these loopholes, ambiguities, and limitations have only resulted to lowering the scope of farmer beneficiaries and awarded lands, much to the benefit of landowners, and also enabling corruption. This was the reason the CARP was branded as “bogus” – it was not genuine. There was always a catch. It was destined to underperform.

Hacienda Yulo and the bigger picture

Despite threats of assault, eviction, and displacement, Nanay Iyang, and Tatay Peter have decided to bravely defend their rights to the lands their ancestors cultivated since more than a century ago.

And this struggle is in behalf of all the landless farmers who have been carrying the whole agriculture sector in their backs for a long time.

For so long, farmworkers like Nanay Iyang and Tatay Peter have cried for help, for reform, and for better treatment. And in a supposedly agricultural country, their cries have been left on deaf ears as they were subjected to exploitation, coercion and killings. For a long time, landless farmers have been left to starve and die.

Even in amid death threats, Nanay Iyang and Tatay Peter are not afraid to assert their rights. As ordinary citizens, we cannot really do much except to listen, to understand their struggles, demand accountability from those who are responsible, and most of all, to demand for improvement. Because these cases of injustice do not end in Hacienda Yulo. It is only imperative and reasonable to protect those who put food on our tables.

For the Sitio Buntog farmers, Hacienda Yulo was their home and their paradise. Unfortunately, this beautiful paradise has been stained with innocent blood. May there be a time when we are no longer impervious to this reality, as we look closely and finally see it.