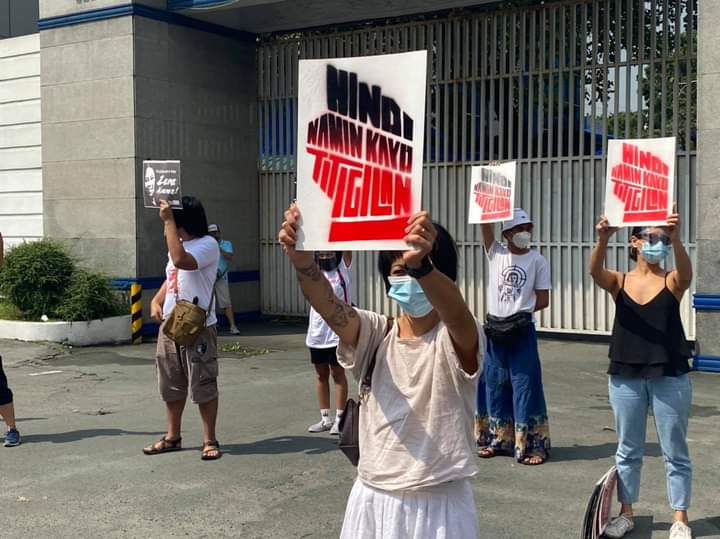 Farmers’ group Kilusang Magbubukid ng Pilipinas (KMP) and fishers’ group PAMALAKAYA denounced how justice is elusive for slain activists like Randall Echanis who was killed on August 10 in Novaliches while the whole of Metro Manila was under lockdown.

The groups held protests in various locations on the first month of the killing of Echanis, and decried that not a single perpetrator has been brought to justice even after a month. KMP held their protest in front of the PNP National Headquarters, Camp Crame in Quezon City.

“One month have passed and we have not heard anything from the Philippine National Police (PNP) about their investigation of the case. We won’t allow this case to go cold and forgotten,” says KMP chairperson emeritus and Anakpawis National President Rafael Mariano.

The peasant leader said their groups would pursue charges against top police officials in the “body-snatching” incident that delayed the release of Echanis’ remains to his loved ones.

“Former PNP chief Arnold Gamboa is still accountable for the cadaver snatching that ensued between the La Loma police and the family of Echanis. Gamboa and NCRPO chief Debold Sinas are not yet off the hook on the body snatching issue. We will definitely pursue the case and press for charges. As for new PNP Chief Lt. Gen. Camilo Cascolan, we want to know his take on this high-profile case which be believe to be as a case of state-sponsored killing,” says Mariano.

KMP reiterated their demand for a thorough, impartial and independent investigation of the case and said that “how the [PNP] will handle and treat this case will say a lot about their accountability on the killing of Ka Randy.”

At least three government agencies are investigating the killing of Randy Echanis — the PNP, the National Bureau of Investigation under Department of Justice and the Commission on Human Rights.

The group also called for a social media rally at 6pm on September 10, recommending the use of the topic #HindiNaminKayoTitigilan.

On September 19, on the 40th day of Echanis’ death, his family, friends and allies will launch the Justice for Echanis, Justice for All or JEJA campaign network.

“The formation’s primary task is to seek justice for Ka Randy Echanis and to make accountable the perpetrators behind his brutal killing,” said KMP.