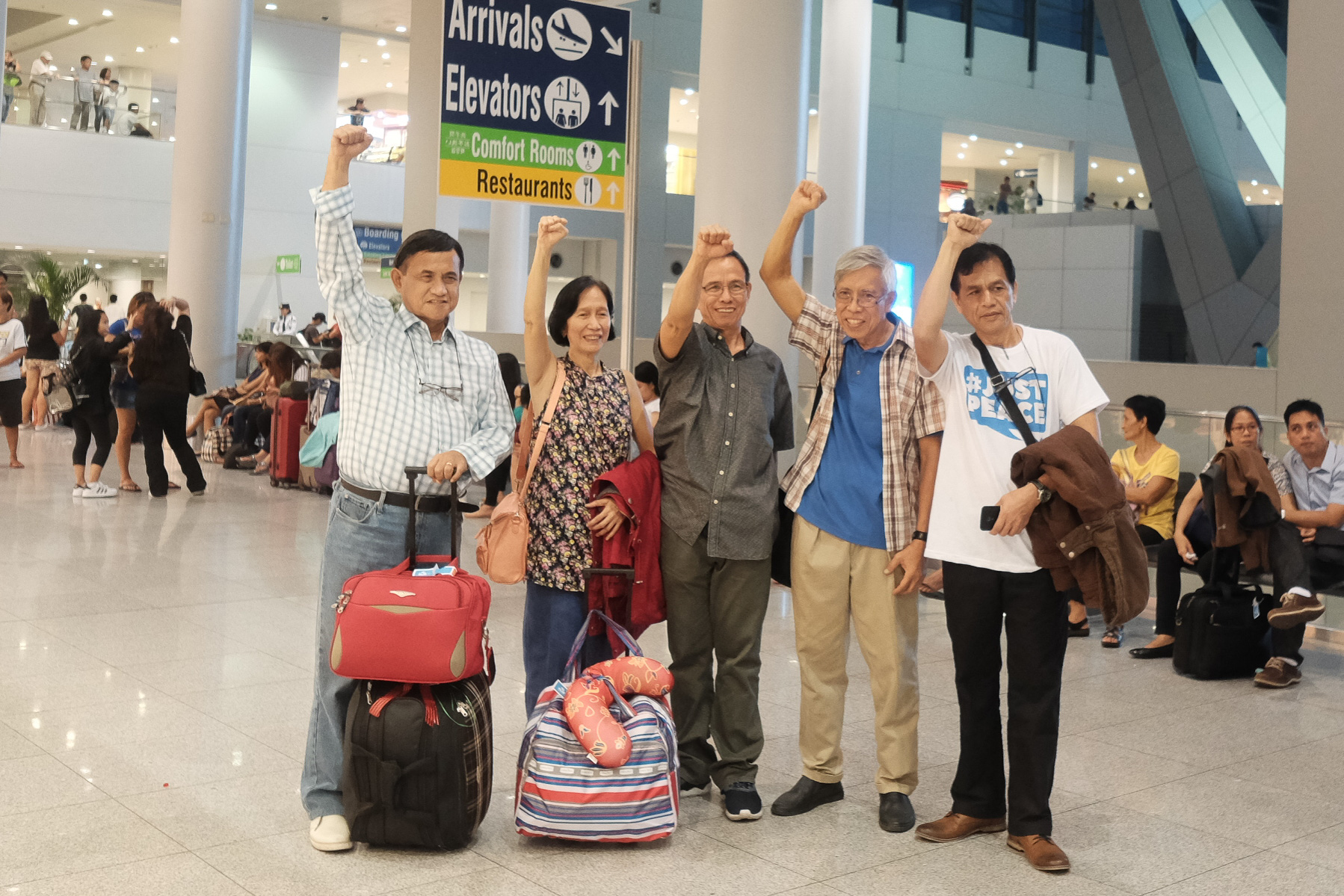 “We look forward to vigorous, forward movement with regards to the peace talks,” said Benito Tiamzon, only more than an hour before his flight to Oslo. He is a National Democratic Front of the Philippines (NDFP) consultant and also who the Benigno Aquino III government arrested in 2014 despite the Joint Agreement in Safety and Immunity Guarantees (JASIG) and tagged as the Communist Party of the Philippines (CPP) chair.

Five of the NDFP consultants flew out of the country on August 20 to join the peace talks in Oslo. The resumption of the formal peace talks between the Government of the Philippines (GPH) and the NDFP is slated to start on August 22. They arrived in Oslo on August 21, 9 a.m. (3 p.m. Philippine time).

Just before they left their homeland, they received news that President Rodrigo Duterte had reciprocated the ceasefire declaration of the CPP.

“That’s a good move. The CPP has declared a 7-day unilateral ceasefire, that makes it parallel. These are good confidence building measures that are favorable in further advances in the peace talks,” said Benito.

Having not left the country in more than two decades, they were issued new passports only on the days of their release. They were among the first to receive the new passport under the Duterte administration, if judging only by the fascination of the immigration officers at the airport who the consultants said had taken longer to leaf through the pages of the new passport.

Benito, meanwhile, is traveling out of the country for the first time.

Their Schengen visas were expedited by the peace talks third party facilitator Royal Norwegian Government on August 19, a day before their flight.

They expect the travel documents of the at least 12 other consultants would be released soon so they may still be able to join the peace talks.

Some of the NDFP consultants now in Oslo have flown out of the country before, but not for leisure or pleasure.

“The USSR had turned to revisionism, and they wield influence over the Vietnamese,” he mused at the time he was in Vietnam.

“But they were open to working with KMU. I was in KMU’s education committee then,” recalled Gamara.

He was a worker from General Motors when he joined KMU.

Silva was president of the Pederasyon ng Manggagawang Pilipino or PAKMAP when he was sent to socialist China in 1971 as a representative of young leaders.

“There were two federations before, I was president of one of them. The Movement for a Democratic Philippines with the Philippines-China Friendship Association (PCFA) had arranged for Filipino delegates to visit China,” Silva recounted.

He also recalled how, through the work of nationalist Renato Constantino, Gloria Macapagal became a member of the PCFA.

“She was even educated in PSR [Philippine Society and Revolution] and her only contention with it was the depiction of her father,” recalled Silva.

The PSR, the national democratic activists’ Bible, was written by the Jose Maria Sison, CPP Founding Chairman (under the nom de guerre Amado Guerrero). It discusses the history part that establishes the nature of Philippine society and the record of past Philippine administrations with regards to people’s rights and interests, the ills of Philippine society, and the solution to these ills, that ultimately is an armed revolution.

In China, Silva and other Filipino delegates were invited to a dinner at the Great Hall of the People for the founding anniversary celebration of the Chinese republic in October 1, 1971. It was then he met famed Communist Party of China leader and Chinese Prime Minister Chou En Lai.

Even now, Silva felt elated being in that dinner. There were more than 100 tables of guests from various countries that sang the Internationale in different languages. It was during the singing that Chou En Lai went around and Silva got to shake hands with the Communist leader.

The first three consultants to arrive in Oslo were Gamara, Jazmines and Silva.

“Work has to be done. This is important. This is promising,” said Silva.