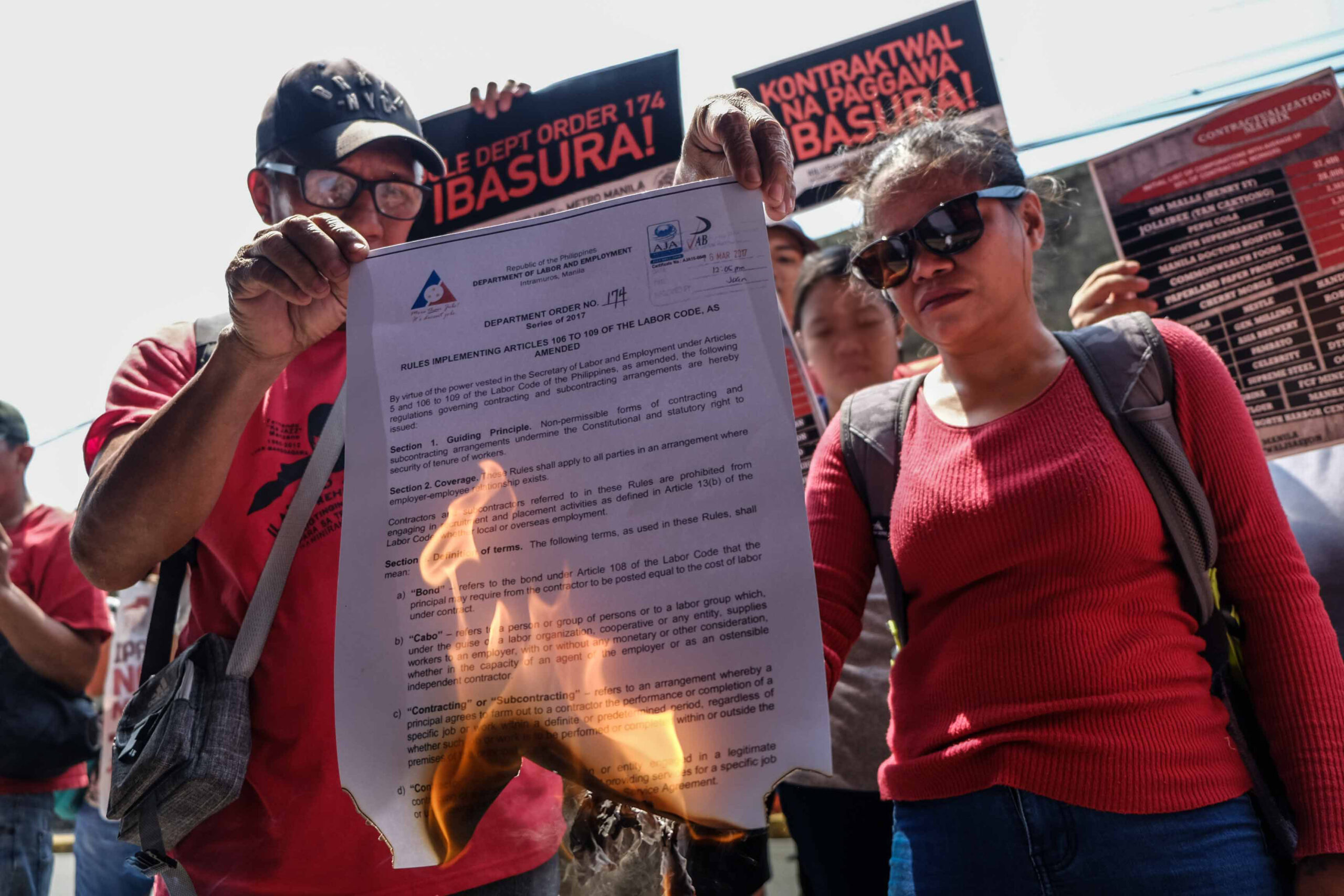 Workers led by Kilusang Mayo Uno (KMU) Metro Manila trooped to the Department of Labor and Employment’s (DOLE) main office in Intramuros, Manila on April 21 to register their opposition against the recently released DOLE Department Order 174 (DO 174).

According to Mark Louie Aquino, KMU Metro Manila Spokesperson, the department order did not resolve the practice of “end of contract” but legalized it, making workers more vulnerable to contractualization.

South Supermarket workers who joined the rally lamented contractualization in their company, where majority of its workers are contractual workers in its ten branches.

According to Buboy Ransas, President of Samahang Manggagawa sa South Supermarket, the supermarket has over 2,200 work force but only 356 are regular workers. The rest are contractual workers where some are direct hired casual employees, agency-hired and what they call as ‘blue girls or boys’ who are hired by concessionaires.

These workers suffer from low wages, especially those coming from branches outside Metro Manila, without benefits like sick leave, overtime pay are not regularly paid, and most of the time their SSS premiums are not paid by the agencies.

On the other hand, DOLE Undersecretary Joel Maglunsod admitted that DO 174 is lacking to completely end contractualization in the country.

“Limitado talaga ito at kulang at hindi ito sumang-ayon sa kagustuhan ng ating mga manggagawa na yung total prohibition sa lahat ng porma ng kontraktwalisasyon. Tama yun at sumusporta ako sa mga kahilingan nila [It is limited and lacking and it does not follow the will of the workers for total prohibition of all forms of contractualization. Such will is correct and I support their demands],” said Maglunsod in an interview.

Maglunsod added that to completely prohibit contracting and subcontracting, Articles 106 to 109 of the Labor Code should be removed through an amendment to the law.

However, the labor official said that the workers should continue the fight to completely end all forms of contractualization. He added that President Rodrigo Duterte will hold a dialogue with the workers on May 1.

Thousands of workers are set to gather on May 1, Labor Day in a nationwide rally to forward the call to end contractualization and to push for workers’ rights.