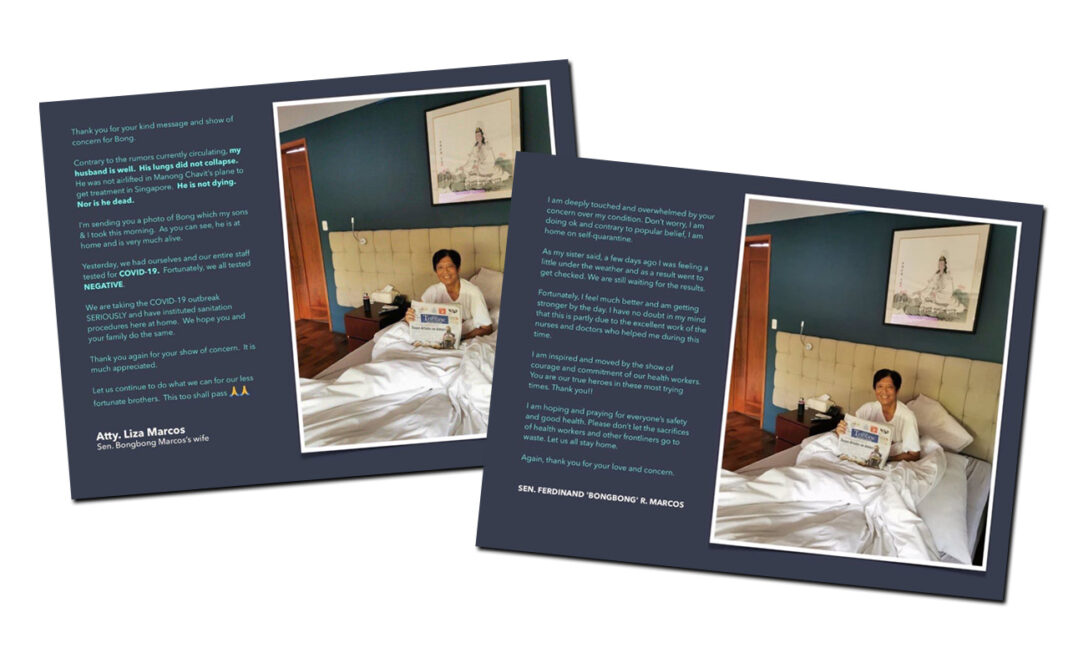 Amid VIP testing backlash, the family of former Senator Ferdinand “Bongbong” Marcos, Sr., said the whole household and their entire staff got tested for COVID-19 and got the results the following day.

“Yesterday, we had ourselves and our entire staff tested for COVID-19. Fortunately, we all tested NEGATIVE,” said Atty. Liza Marcos, wife of Bongbong, in a statement that circulated online past noon of March 26.

The Marcoses, in a class of their own, did not heed the backlash as they focused on addressing the rumors on the health of the lone son and namesake of the former dictator.

Government drew public ire for VIP testing for more than a week now – when it was revealed that top government officials were tested even if they are asymptomatic or do not fall within the government’s triage for testing only those with severe symptoms or the elderly or with complications exhibiting mild symptoms.

The Department of Health (DOH) countered with the explanation that senators tested fell within the period before the agency changed its guidelines on testing that before included those who were exposed to persons who tested positive. Tests are only possible to be ran through the government laboratories under the DOH.

“Contrary to rumors currently circulating, my husband is well. His lungs did not collapse. He was not airlifted in Manong Chavit’s plane to get treatment in Singapore,” clarified Liza in her statement. 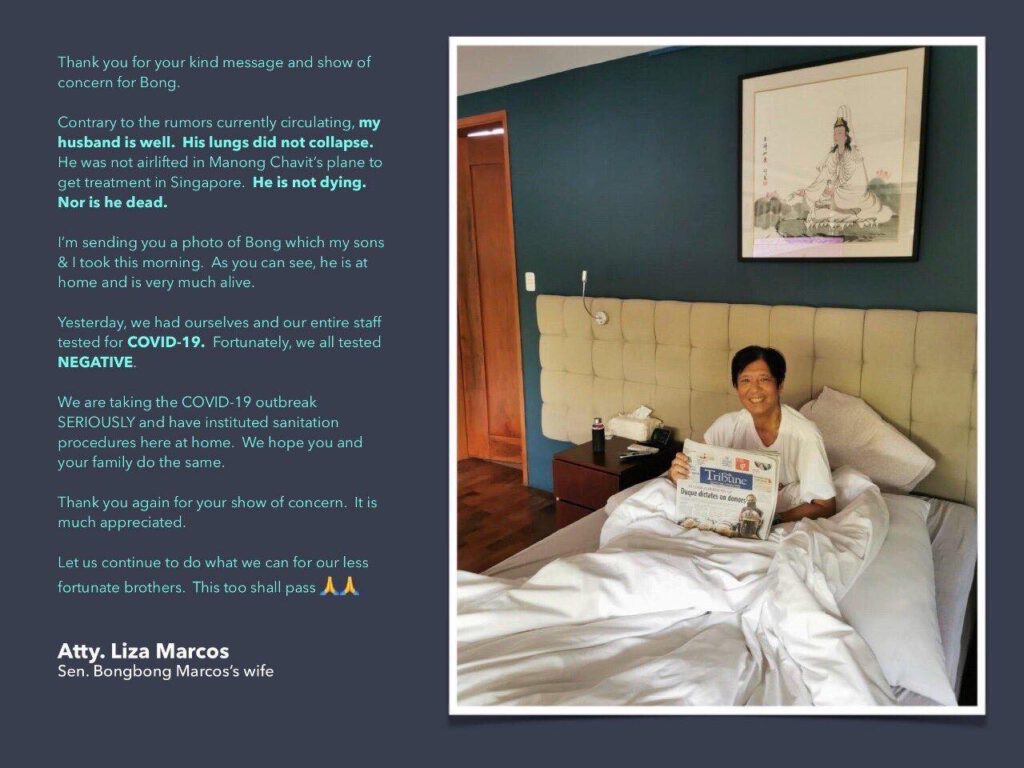 Since morning, social media was abuzz with talk that the losing 2016 vice-presidential candidate has pneumonia, was intubated and waiting to be brought to Singapore for treatment.

“As my sister said, a few days ago I was feeling a little under the weather and as a result went to get checked. We are still waiting for the results,” said Bongbong in a statement using the same photo template for his statement an hour after his wife’s statement circulated.

I am hoping and praying for everyone’s safety and good health. Please don’t let the sacrifices of health workers and other frontliners go to waste. Let us all stay home.

Again, thank you for your love and concern. pic.twitter.com/gHLJyeE0D2

The two conflicting messages—whether Bongbong’s test is negative or still waiting for results—have yet to be clarified.

Bongbong’s sister Senator Imee Marcos said to PTV4 that he returned from Spain “unwell” and is now resting at home. She confirmed that Bongbong already got tested for COVID-19 and is waiting for the results.

“He came back from Spain unwell. Finally got a test 2 nights ago,” she told reporters in a text message.

Earlier this month, Imee also took the COVID-19 test with other senators.

There have been only 2,147 tests conducted and 707 confirmed positive, or 33% positive rate of those tested, since the first COVID-19 case in the Philippines was confirmed on January 30. There are also 45 deaths among 707 positive cases.

VIP testing and violations of quarantine
Following the VIP testing exposé on Sunday, only yesterday it was revealed that Senator Aquilino “Koko” Pimentel and ACT-CIS Partylist Rep. Eric Yap did not go on or violated their self-quarantine even after getting tested and their results turned out positive. This earned the ire of the public who said they wasted the tests and endangered others.

Pimentel earned the contempt of the public following his violation of his self-quarantine that would supposedly end on March 28 and possible endangerment of his pregnant wife and doctors and health workers of the Makati Medical Center by going there to accompany his wife on March 25. MMC said 68 doctors and health workers from various departments of the hospital are now placed in quarantine following Pimentel’s ‘breach of protocol.’ Staff of S&R Shopping also said they will place the staff who interacted with Pimentel under quarantine after it was revealed that he also went to the shopping center’s Bonifacio Global City branch on March 16. Pimentel got tested for COVID-19 on March 20 and he experienced symptoms on March 14.

Yap attended a meeting at Malacañang Palace on March 21, possibly with the IATF and the 20-hour House special session for President Rodrigo Duterte’s emergency powers on March 23 after he took the COVID-19 test on March 15. The Presidential Security Group announced that at least six of their personnel will be placed on quarantine. The attendees of the House special session – some of those took part of the photo op – will also go on self-quarantine.

The full force of the law and the warnings of the Inter-Agency Task Force on Emerging Infectious Diseases (IATF) on violators of Republic Act No. 11332 and the Republic Act 9271 or the Quarantine Act of 2004 are yet to be seen. They strongly said they are serious and they will “make a sample” of punishing or filing a case against violators.

Department of Justice Secretary Menardo Guevarra enumerated laws applicable to violators of the enhanced community quarantine in the March 16 press con of the IATF.