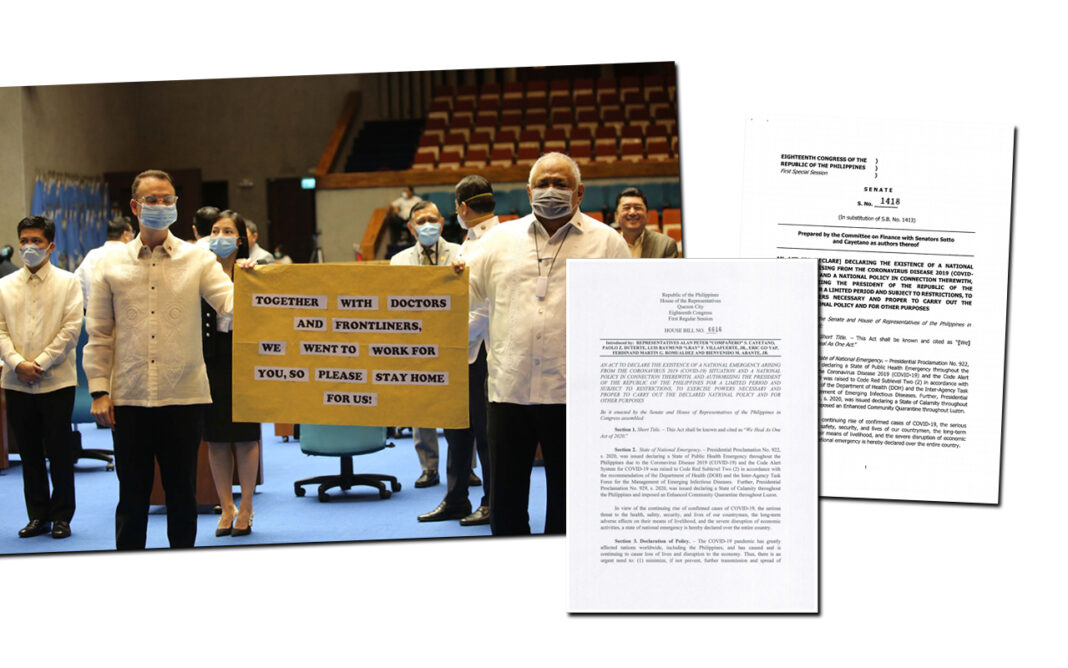 The two chambers of Philippine Congress, the House of Representatives and Senate, passed on third reading their respective versions of the Malacañang Palace draft bill called Bayanihan Act of 2020 at around midnight of March 23. The bill sought to grant President Rodrigo Duterte specials powers to address the COVID-19 situation “for a limited time and subject to restrictions.”

At past 3am, the House decided to adopt the Senate version of the bill to expedite the process. This means both chambers of Congress no longer need to convene the bicameral conference committee and the bill, now the “Bayanihan To Heal As One Act,” can now be sent to Duterte for his signature for it to become law.

The law and Duterte’s additional powers will be effective for three months, but Congress has the sole authority to extend it, according to the Senate and House bill versions.

The copy of the Malacañang draft bill sent to Senate circulated online on Sunday, with many referring to Duterte’s request as “emergency powers.” Presidential Spokesperson Salvador Panelo denied this and clarified that Duterte is seeking “powers necessary to carry out urgent measures to implement the national emergency.”

Section 3 of the Malacañang and House draft bill expressly stated that “in order to optimize the efforts of the President to carry out the tasks needed to implement the aforementioned policy, it is imperative to grant him emergency powers subject to such limitations as hereinafter provided.”

Both Senate and House versions amended the controversial ‘take over’ private businesses and utilities provision to ‘directing the operations’ of privately-owned hospitals and public transportation.

The provision drew public ire on social media, owing to mistrust of the government to not abuse its power. The public also reacted in relation to Duterte’s tirades against private companies such as the private water concessionaires Maynilad and Manila Water and questions raised as to why these essential public utilities have been left to profiting businesses to run.

Duterte’s row with ABS-CBN was also brought up, as the sweeping provision may also include media companies, and why would there be such need if such move will be made by the President.

The public also raised that by allowing the “take over,” these companies in the end may be turned over to Duterte’s favored businessmen as what happened during the time of the late dictator Ferdinand Marcos, Sr. upon imposing Martial Law.

Another controversial provision is the realignment of funds. The Malacañang draft of the bill authorizes the President to reprogram and reallocate any appropriation in the 2020 General Appropriations Act for any purpose the President may deem necessary to fund efforts to combat COVID-19.

But this may be unconstitutional, given the Supreme Court ruling on former President Benigno Aquino III’s Disbursement Acceleration Program or DAP, ruling that the President can only realign savings from appropriations in the approved budget of the Executive branch. Addressing this, the Senate and House agreed version limited the President’s power to realign funds to savings within the Executive Department.

Still, there is no breakdown provided to the funds to be repurposed. Deputy Speaker Luis Raymund Villafuerte, the sponsor of HB 6616, said the President could use P275 billion if the measure is passed into law.

The President is required to submit a weekly report to Congress with details on the amount of funds used.

Too many powers, but still no clear plan?

“We strongly oppose the grant of immense power contemplated in this bill on a single person to realign the 2020 budget of almost all branches of government, as provided under Sec. 4, Paragraphs 14-17 of the Emergency Powers Bill,” the Concerned Lawyers for Civil Liberties (CLCL), a broad network of human rights lawyers and civil libertarians, said in a statement.

“Worse, the centralization of budget powers on the President can also compromise the constitutional requirement of fiscal autonomy and checks and balance of the Judiciary, the Legislature and other independent constitutional bodies. Moreover, it is an abdication of legislative power over the budget,” the group added.

The group said the provision to grant emergency powers to Duterte should have a definite termination date, which can only be extended upon congressional approval, as is already contained in the present version of the bill.

The group also urged Congress not to pass the measure but instead pass legislation that will expressly reallocate, not the entire budget, but specific pork barrel items, such as the Road User Fund or Malampaya Fund and the billions comprising the presidential discretionary funds. The reallocated funds from these sources, they said, may provide economic relief to the poor, the small businesses, the farmers and the workers—all sectors who are economically devastated by the virus.

“Congress will make a disastrous mistake if its solution to the COVID-19 is centralizing more power to one man, especially one who believes that the problems of the country can be simplistically solved with the use of brute force and martial law powers,” the group concluded.

“The emergency powers measure passed by Congress is a prescription for abuse of power by the President, and offers inadequate solutions with no clear plan on how to stem the spread of the COVID-19 pandemic,” said the National Union of Peoples Lawyers (NUPL).

NUPL cites the following observations on the Senate and House-approved bills:

Human rights group Karapatan said the bid for emergency powers is a bid for potential abuse of power. It added that it is an admission of the administration’s failure to combat this pandemic, after actively downplaying the outbreak for the past weeks by bragging that we are a “model country” and the Filipino people are paying with their lives for the government’s incompetence.

“We strongly reiterate that COVID-19 is a matter of public health emergency. What we urgently need is a comprehensive approach to mass testing, isolation and contact tracing. We do not need more militarist and fascist measures to address this public health concern. We say no to emergency powers!,” said Karapatan.

“We call on all Filipinos in quarantine to reject the emergency powers of Duterte and continue to assert our legitimate demands: Mass testing, food assistance, and the lifting of unnecessary lockdown restrictions. Let’s protest from our homes and communities to call for urgent relief, defend our rights, and protect our health,” said Mong Palatino, BAYAN Metro Manila chairperson.

Groups raised that the Duterte administration could fast track the procurement or production of appropriate personal protective equipment (PPE) for doctors and health workers in the front lines even without special powers.

“These proposals are completely unnecessary in facing the COVID-19 pandemic. What the people need are the correct and timely allocation of sufficient funds for healthcare measures such as building the capacity to conduct free mass testing and providing much-needed socio-economic relief for the people,” said Kilusang Magbubukid ng Pilipinas National Chairperson Danilo Ramos.

Ramos pointed out that there are already tens of billions worth of funds available to the President and related national government agencies which can quickly be utilized for the health crisis. These are the Php12 billion President’s Contingency Fund, the Php16 billion Calamity Fund, and the Php6.8 billion Quick Response Fund of national agencies.

Some also did not agree with giving Duterte the power to re-align funds, especially since there is still no clear plan.

“Blank check is dangerous because it is likely to be used for economic loot. It could be used for corruption, onerous deals with big foreign and local businesses, and even savings for the next presidential elections,” said Elmer Labog, Kilusang Mayo Uno chairperson.

“As domestic workers, we know how important the breakdown of expenses is. When we ask our employers for money for buying groceries, or whatever household expense, they expect a complete audit, down to the last cent. We understand that this is essential to trustworthiness. Why should we not expect the same as the head of state? We audit a mere few thousand HK dollars, but it can be the reason of our termination if not done properly. Why can’t we hold the President to the same standard, as he’s asking for a blank check worth billions of Pesos and they don’t even know how many testing kits, PPEs, etc. we need?” said United Filipinos in Hong Kong (UNIFIL-MIGRANTE-HK) chair Dolores Balladares Pelaez.

NUPL also clarified what savings meant and wondered which and how much of the funds will now be considered savings.

“The savings within the contemplation of the 1987 Constitution refer to actual savings, not projected, potential, or hypothetical ones,” said NUPL on the power given to Duterte to realign savings.

P500 a day for frontliners an insult – labor group