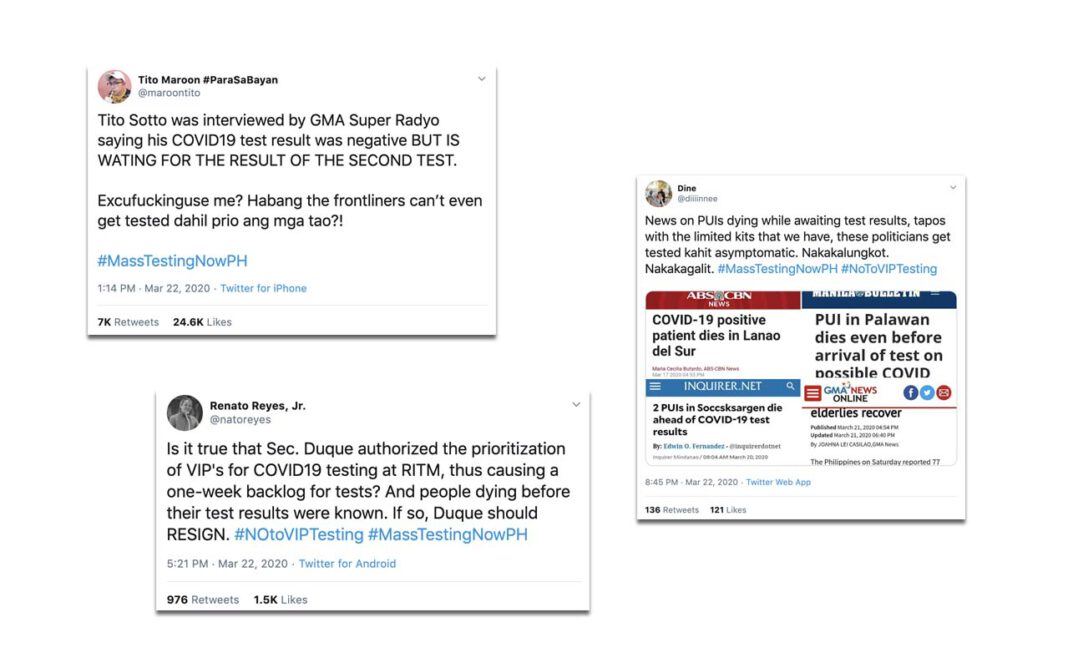 #MassTestingNowPH and #NoToVIPTesting became top trending topics on Twitter following a day-long exposé of politicians having been tested despite ‘violation’s of Department of Health (DOH) protocols’ (as they were asymptomatic, not PUMs or PUIs). This is also despite that only 1,399 tests have been conducted since the first positive case in the last week of January (or around eight weeks) since and the insufficient number of testing kits.

The public also condemned how the politicians got VIP treatment – their tests being done ahead of PUMs or PUIs and despite the lack of testing kits, and served up at their own homes or wherever they are self-quarantining, also including getting tests for spouses or family or clan members – while there were reports that those with severe symptoms were not tested due to lack of tests. Many PUMs and PUIs, as well as frontliners, were also not tested.

The government had so far refused calls from the public to make mass testing a major component of its strategy in the fight against COVID-19 spread, with the Inter-Agency Task Force on Emerging Infectious Diseases (IATF) sticking to the lockdown as solution and the DOH saying mass testing is not needed now, but also because they lack the laboratories, equipment, personnel and testing kits.

When we say #MassTestingNowPH, we mean testing of patients with COVID 19 symptoms, frontline health workers, and communities with confirmed cases. #NOtoVIPTesting of politicians which only delay test results of patients who are dying. pic.twitter.com/tnARcsW7jy

Mass testing is possible even without sweeping emergency powers.#MassTestingPH #NOtoVIPTesting

I'm Chesca, a frontliner, and I enjoin the call of our youth sector and medical workers to test as much people as we can

Prioritize our frontline health workers, PUI/PUM, the communities with confirmed cases and the vulnerable sectors of the population, NOT the politicians and VIPs who are only concerned about their self-interest and not of the Filipino people.#MassTestingNowPH #NoToVIPTesting pic.twitter.com/69qRlivVT2

This is what we mean by #MassTestingNowPH:

“You are not powerless. Use your Facebook, Twitter, Tumblr, and YouTube accounts to voice your anger and frustration against the politicians who are driven by greed, and who are the very source of corruption in government.” —Sen. Miriam Defensor Santiago #NOtoVIPTesting pic.twitter.com/hPMufiuxnT

NEVER FORGET THE NAME OF THIS OFFICIALS!

We are one of the healthcare workers fighting this dreaded disease. It's time to fight what our nation deserves. Besides being home quarantined, practicing safe hygiene and social distancing, I think we all deserve this:#FreeMassTestingNOWPH#NOtoVIPTesting pic.twitter.com/HIqqSnbY3h

Is it true that Sec. Duque authorized the prioritization of VIP's for COVID19 testing at RITM, thus causing a one-week backlog for tests? And people dying before their test results were known. If so, Duque should RESIGN. #NOtoVIPTesting #MassTestingNowPH

Tito Sotto was interviewed by GMA Super Radyo saying his COVID19 test result was negative BUT IS WATING FOR THE RESULT OF THE SECOND TEST.

News on PUIs dying while awaiting test results, tapos with the limited kits that we have, these politicians get tested kahit asymptomatic. Nakakalungkot. Nakakagalit. #MassTestingNowPH #NoToVIPTesting pic.twitter.com/OWmI8sUNp6

The Department of Health responded to “the increasing demand for COVID-19 laboratory testing” by posting this tweet while the two hashtags are still trending:

The government agency said, “Those experiencing severe symptoms or mild symptoms or are 65 years above can be tested.”

A message from a doctor was shared on March 21 by ABS-CBN Correspondent Chiara Zambrano revealing “politician and their staff are now asking to be serviced in their homes by DOH surveillance teams.”

Various celebrities retweeted this and expressed their dismay.

Netizens protested for days the testing of public officials that does not qualify with the DOH protocol. DOH has a triage system used to determine which people can avail a scarce resource, in this case a testing kit. In this triage system, only PUMs with mild symptoms who are elderly or have other conditions or those with severe symptoms will be tested.

Screenshots of a supposed conversation including a “lab personnel” or “researcher” at the Research Institute for Tropical Medicine, circulated online. The screenshots included a checklist of politicians tested “who have their own VIP ‘codes'” and their “own queue.” The test results were also supposedly sped up to come out after 24 hours – when the usual is two days or longer.

The screenshots also said the RITM director was relieved as a ‘scapegoat’ to the VIP testing scandal.

Netizens zeroed in on San. Francis Tolentino who tweeted his gratitude for testing negative, looking like he got serviced at home, but the senator soon deleted the tweet.

In the afternoon of March 22, Duterte’s letter and an unnumbered bill requesting for emergency powers to face COVID-19 circulated online.

Sotto confirmed this day that he has received a draft bill from Malacañang asking for the declaration and special powers for Duterte.

“The letter to Congress signed by the Executive Secretary says powers necessary to carry out urgent measures to implement the national emergency, not emergency powers,” Panelo said in a text message to reporters.