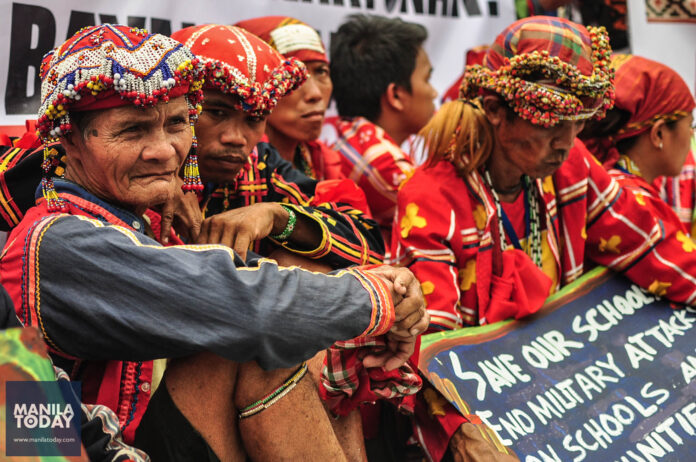 Over 300 Lumads and peasants traveled to Manila to demand President Noynoy Aquino to pull out military forces in the Lumad and peasant areas in Mindanao, especially those deployed or encamped in community schools, farms and public civilian facilities such as barangay halls and basketball courts. The protesters reached Manila on November 24 after traveling thousands of kilometers from Mindanao, converging in Butuan City on November 15. The ManiLAKBAYAN ng Mindanao 2014 contingent is calling for “Food and Peace for MindaNOW.”

Manilakbayan organizers demand immediate halt of all military operations and pull out from Lumad and peasant communities. They claim that the ongoing massive militarization in Mindanao results to human rights violations and killings of Lumad tribal leaders who resist land grabbing by large-scale mining corporations in their areas. The displacement of tribal communities leads to hunger as they are forced to abandon their livelihoods. The children are also forced to leave their community schools, as military personnel have encamped on these facilities.

“We came here to let the people in the national capital know about our sufferings and struggles in Mindanao and to demand President Aquino to immediately take action,” said Fr. Christopher Ablon, spokesperson of Manilakbayan.

Indigenous people group Kalumaran decries the presence of around 50,000 to 60,000 troops of the Armed Forces of the Philippines (AFP) in Mindanao as part of President Noynoy Aquino’s counterinsurgency program, Oplan Bayanihan. They say this comprises 50 to 60% of the total number of the AFP forces.

The Lumads and peasants will hold activities to inform the public of their plight until December 10, the International Declaration of Human Rights Day. With their makeshift tents made of bamboo, they will spend their nights at Liwasang Bonifacio, hoping that the President will heed their demands.

Lumads and peasants left their communities for ManiLAKBAYAN as early as November 12 to get to the meet-up place on November 15, where the contingent started to travel towards Surigao City to cross to Visayas islands.