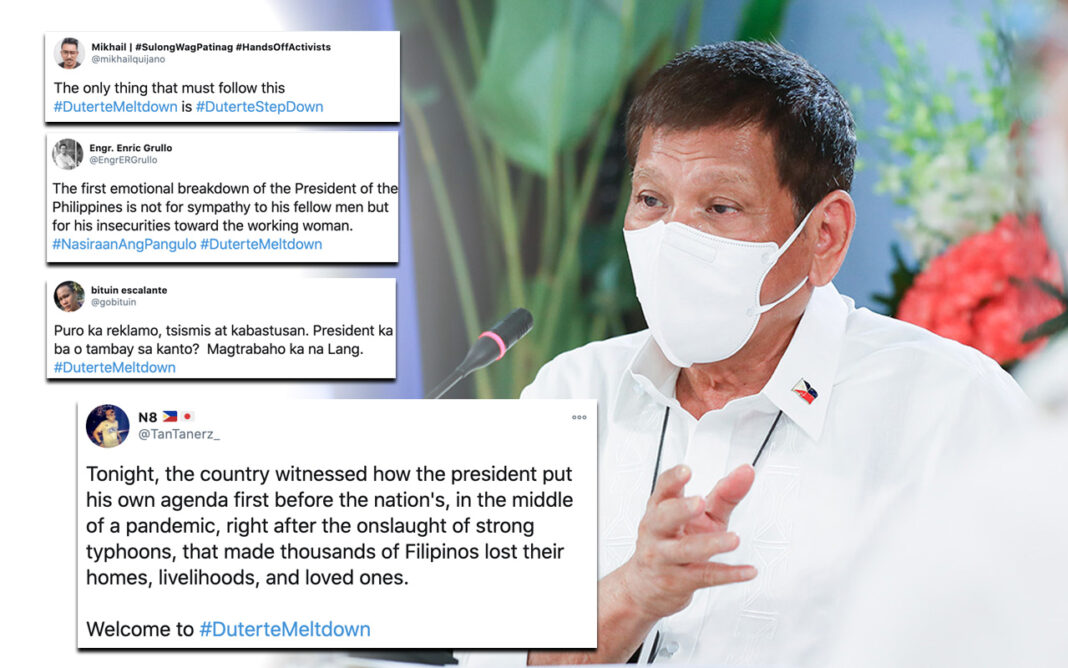 In a televised speech on November 17, President Rodrigo Duterte addressed issues trending on social media and spilling on the news (or vice versa) such as #NasaanAngPangulo and students calling for him to act now or step down. These issues were raised when five successive destructive typhoons and government’s late disaster preparedness briefings (post-landfall in typhoon Rolly and post-typhoon exit in typhoon Ulysses) and still delayed rescue and aid–many were not rescued until days after being stranded on their roofs and many still not reached by any help from the national government.

The National Disaster Risk Reduction and Management Council (NDRRMC) estimated more than 500,000 families or more than 2 million individuals have been affected. Almost the whole of Luzon have been ravaged by the last 5 strong typhoons.

Apart from cursing in his speeches, the president has not been seen to show emotions of late, except in ranting and railing on said issues hounding his administration. But Duterte’s defense of himself through enumerating the things he does and ranting against Vice President Leni Robredo and students pressuring him to act now was seen by netizens as a #DuterteMeltdown (that was also trending with #NasiraanAngPangulo). Many are still tweeting on the topic, following revelations and apologies from top government officials who have given Duterte wrong information on which he based his rants against the vice president.

Duterte said, “So kung sabihin mo, “Nasaan si Duterte?” Well, Leni Robredo knew, I’m sure, that there was a summit meeting. For her not to know it, it’s a sin for a Vice President to be ignorant about what’s happening in government. And the only way — the only thing that you can say just to reach the — the media is, “Saan si Duterte?” When you knew that I was busy giving my statement of intervention.”

Duterte also said Robredo asked this to the media that’s why it got reported in the news. Duterte also called the VP a liar for “pretending not to know he was in the ASEAN summit.”

The president stressed he was not missing, but also stressed how the Filipino people were told long ago that he was a night person and his day started at 2pm. Typhoon Rolly made landfall at 5pm and the NDRRMC briefing only happened five hours later, the president conspicuously absent in the first high-level meeting in what was known then as the strongest typhoon on earth in 2020. #NasaanAngPangulo became a trending topic.

Presidential Spokesperson, in a most undiplomatic manner, also called “loko-loko” [crazy] the students who are calling out Duterte’s inaction and proposing to go on strike.

Roque and Duterte both got some things wrong. Students who called out Duterte’s inaction like those from Ateneo de Manila University are not protesting for him to do something, but to “act now or step down.” The funding of the University of the Philippines (UP) comes from the coffers of the nation, and Iskolars ng Bayan are indebted for their education not to the president or any politician but to the Filipino people.