Home NEWS Calls for accountability, to not romanticize Filipino resiliency resurface after 4 strong... 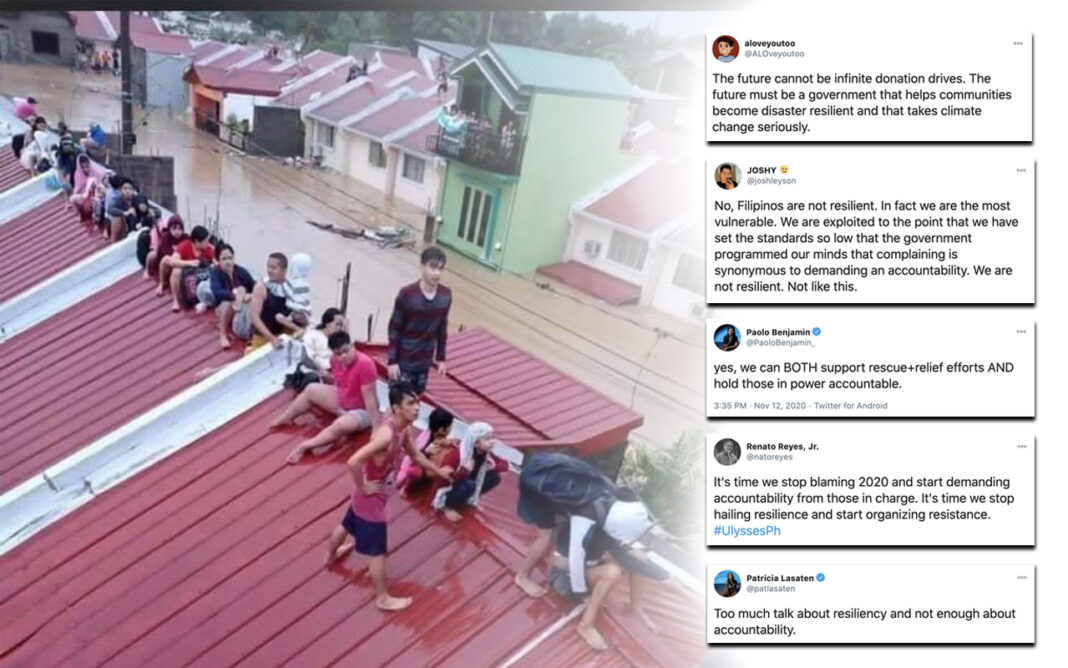 From the time typhoon Quinta ravaged parts of Bicol Region and Southern Tagalog, to when the strongest typhoon on earth in 2020, Rolly, came and battered Catanduanes and other nearby provinces, then Siony hit Batanes hard and after Ulysses flooded Metro Manila, netizens talking about calls for accountability from the government have made rounds albeit without a trending topic to be followed.

The usual message of ‘Filipino resiliency’ amid typhoons and other calamities – that government officials, pro-government supporters at this time and even ordinary citizens and traditional media for years have always been quick to hark on even during or right after a calamity has also been laid bare for criticism, many asking to stop romanticizing or glorifying resiliency, especially if accountability is not being demanded enough.

Some said the lack of accountability or the inutility of government is what pushed Filipinos to be resilient, because they had no option if they want to live. It meant they choose and paved their own means to survive.

Some pointed out that resiliency is a matter of social and economic class standing.

Also during this year of the pandemic, ‘2020’ has been sort of made into an entity responsible for the many unfortunate events of the year, in a similar way how the stress on ‘Filipino resiliency’ overwhelm or covers up feelings or demands for accountability.

The issue of climate crisis was also brought up.

A tweet also went around how new police chief Debold Sinas and his family were rescued by three boats. Comments on Sinas and family getting prioritized for rescue and how the police chief himself did not evacuate or got caught flat-footed amid the disaster were also shared.