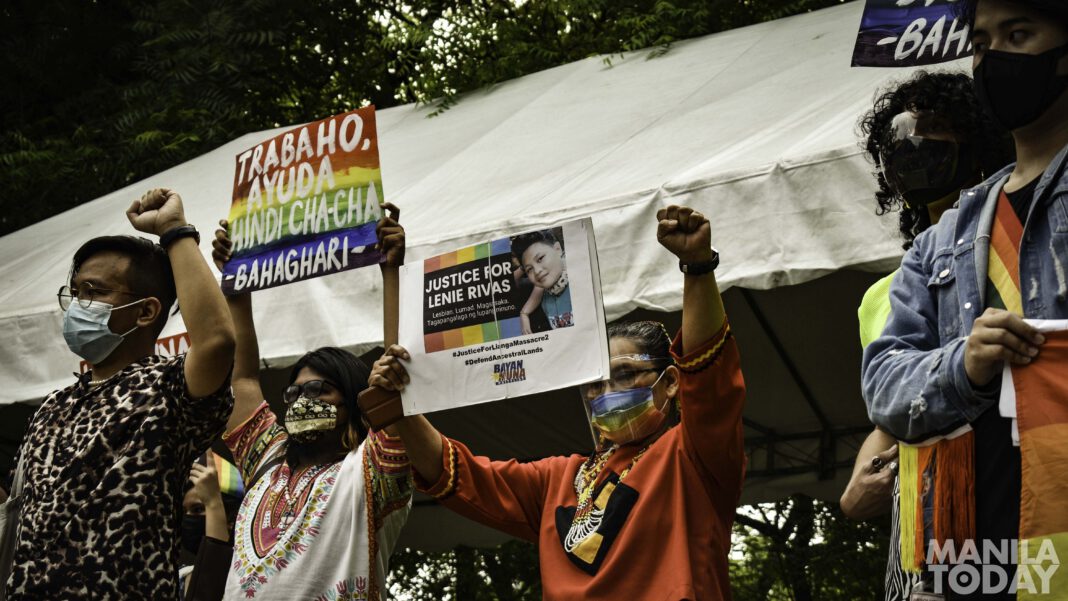 Pride march protesters arrived clad in their most vibrant outfits at the Bantayog ng mga Bayani in Quezon City. Even the mandatory wearing of face shields and masks become part of the colorful overall get up of the protesters. They bore banners and placards with calls “Makibeki, wag mashokot” and “Duterte, sashay away,” derived from the catchphrase to send queens packing at the popular show RuPaul’s Drag Race.

But on top of the lively occasion, members of the LGBTQI+ and their supporters assert: “Pride is a protest”.

This year’s gathering was the first year since the Pride March dispersal, where 20 members of progressive LGBTQI+ organization Bahaghari were arrested in Mendiola.

The Pride March in Manila was also held the second time amid the ongoing COVID-19 pandemic.

Vaklash is a portmanteau for “vaklush” (gay) and “backlash”, meaning to say that the LGBTQI+ community is pushing for democratic rights, jobs, and aid as the country continues to grapple with the pandemic.

The group decried the killing of Mayor who was found on May 20 ” bloodied, bruised, and with legs sprawled, a wooden stick impaled into their genitals.” The group added that all evidence points to a hate crime and sexual violence.

The most recent killing among the members of the LGBTQI+ community was the Lumad-Manobo farmer Lenie. She was one of the three killed on June 15, and what is now known as the Lianga 2 massacre. Like her 12-year-old sister Angel, they were found barely recognizable with smashed faces, limbs broken and genitalia torn apart.

Valmores lamented the impunity in crimes against the LGBTQI+ was in stark contrast to President Rodrigo Duterte’s granting of absolute pardon to US soldier Joseph Scott Pemberton who killed transwoman Jennifer Laude in October 2014.

The Bahaghari spokesperson also chided the president’s flip-flopping position on the SOGIE Equality Bill that has languished for at least 21 years in Congress.

Issues of the community

Livelihood, financial aid during the pandemic, and human rights were the issues highlighted in the testimonies of different LGBTQI+ members from the ranks of farmers, workers, students, and urban poor.

Kabataan Partylist Metro Manila member Donald Navayra recalled the 1969 Stonewall riots which had been the inspiration of Pride protests in the country and other parts of the world.

[In the current context of the country, the Pride protest cannot be separated from the struggle of the Filipino people because this is a matter of class oppression.]

Navayra said that aside from the discrimination faced by the members of the LGBTQI+ community, they also suffer the socio-economic inequalities in the country. These are the landlessness and hunger of peasants, the low wages and difficult working conditions of workers, homelessness and destitution of the urban poor, and the lack of access to education of the youth and students among others.

But this year’s Pride March is not ordinary. This is the Pride March before the 2022 presidential elections, said Valmores.

This Pride and the coming months are imbued with an important task for the LGBTQI+ community, she said.

[This only leads to accountability, ending the very administration that perpetuates this situation. We inform the one sitting in Malacañang that the LGBTQI+ community is condemning to end his rule of greed, and lust for power.]

Both Navayra and Valmores echoed the need to revolt and resist as the answer for the ultimate liberation of the Filipino LGBTQI+ individuals, supporters, and allies.