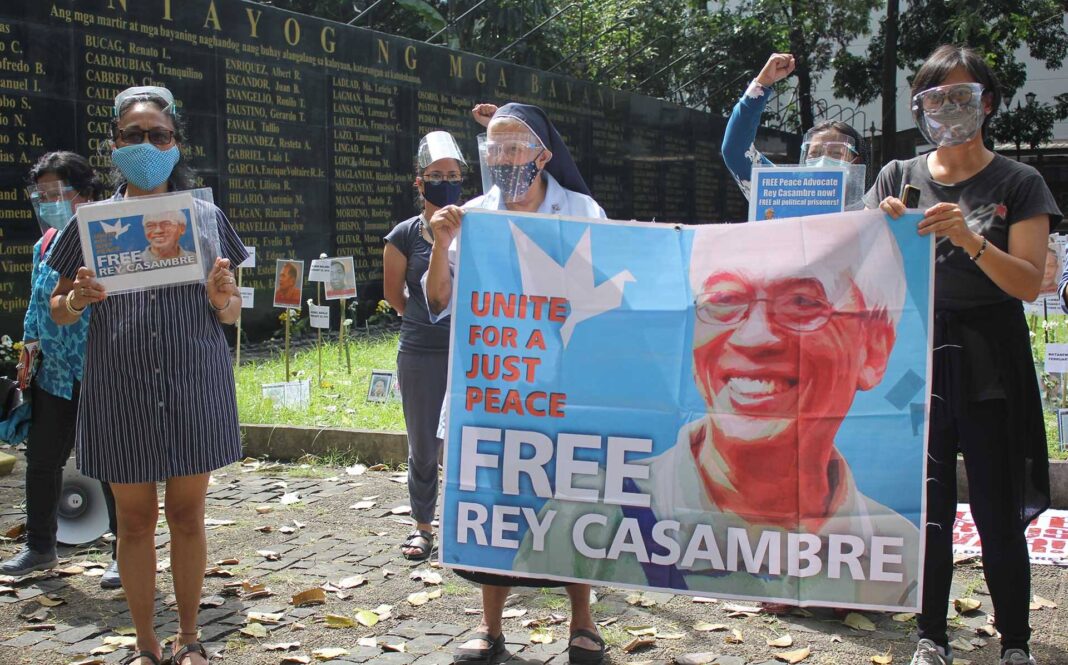 I chanced upon this article on Vietnam’s Covid-19 response by Rey Casambre or Ka Rey two weeks or more after it was published. Had I not known Ka Rey was in jail, I would have pictured him speaking about this in a gathering among peers or discussing to various audiences in forums the first chance he would get. It was the way I have seen him a lot of times since I was in college. He was always present in talks on peace, human rights and international issues.

He pointed out in that article while both countries’ COVID-19 response was of a militaristic approach, Vietnam’s response was pro-people in direction and that manifested in their current situation while the Philippines continue to lag behind. That he would write on Vietnam’s COVID-19 response with reference to the Philippines’ situation is exactly how many knew of him. Rey Claro Casambre is a peace advocate and a peace expert. He is vastly knowledgeable of political and peace issues across many countries.

“When Tatay was not yet imprisoned, what we can consider our bonding activity during my parent’s common birthday is just to share food and stories. Usually, their grandkids make them birthday cards,” said Xandra Bisenio, Ka Rey’s daughter.

But during the pandemic and lockdown, physical jail visits have been suspended for more than a year. Xandra said the family could now only make up for not being able to visit Ka Rey by sending him supplies and making sure that he would not miss the vegetables and proteins he needs like bitter gourd, okra, tomato, cucumber, green leafy vegetables, eggs and fish. The distributed food in jails lacks nutrition, she said.

“For his birthday, a cake and birthday cards from his grandchildren would somehow give him comfort amid these dark times. But the most important gift would be to continue to campaign and call out against his baseless detention and also the baselessness of the Anti-Terrorism Law (ATL),” said Xandra.

Ka Rey and his wife Corazon Mercado Casambre were arrested by police on December 7, 2018. According to a police report, Casambre and his wife were arrested at 12:10 am Friday while plying Molino Boulevard in Bacoor, Cavite. Police said evidence was found when they served Casambre’s arrest warrant, including one Colt Commander Cal. 45 pistol, one Magazine for Cal. 45, 7 live ammunitions for Cal. 45, one bundle electric detonating cord, and one fragmentation grenade. Police said they also seized were two cellphones, one MacBook, P6,000 in cash, and one silver Toyota Altis. Ka Rey is the Executive Director of the Philippine Peace Center and his wife a translator of that group at the time of their arrest.

The couple were first held at Camp Crame. The cell for male detainees were cramped, probably only 8×10 feet in size. But for the female detainees, it was even smaller, only about 8×3 feet.

At the Bacoor City Jail, Ka Rey got sick and was tended to by his cellmates. His daughter, Xandra, said the cells were 160-200% over congested and without proper ventilation and even the visiting area was disorderly and dirty. That was a difficult time, she recalled.

“Like other elderly prisoners and those with comorbidities who were given compassionate release due to the COVID-19 situation in overcrowded jails, he should have been released right?” said Xandra.

Ka Rey was transferred three times until his current detention at Camp Bagong Diwa in Bicutan, Taguig. At least now, he is among fellow political prisoners—a community to support him. They also have access to electric fans for better ventilation and television so he can watch the news.

Ka Cora was released after the illegal possession charges against her were dismissed. The fiscal found the evidence to be ‘preposterous’—that a grenade was found “in plain view” inside a moving vehicle in the compartment of the vehicle’s dashboard because the compartment was supposedly open as the laptop was propped open on its cover. This was said to be in front of the passenger seat where Ka Cora sat. With the lack of a search warrant, the illegal items were supposed to be found in plain view. The Casambre family thinks that to be the reason the Criminal Investigation and Detection Group operatives planted the evidence or concocted the story of how they were found that way.

But Ka Rey remained in jail. The illegal possession of firearms and explosives charges against him, for the other evidence supposedly seized, are still pending in court. There was no hearing set for these charges in 2021 and the next hearing would be in 2022.

There were also additional charges filed against him, as if ensuring he would not walk free anytime soon. The police said Ka Rey had a warrant of arrest for murder and attempted murder, issued by Davao Oriental Regional Trial Court 11th Judicial Region Branch 32 Presiding Judge Emilio Dayanghirang III. On one hand, police tagged the couple’s arrest as an arrest of “central committee regular members of the Communist Party of the Philippines.”

Ka Rey became the fourth peace consultant to be arrested that year. Three other peace consultants—Vicente Ladlad, Adelberto Silva and Rafael Baylosis—were also arrested on similar charges of illegal possession of firearms and explosives. All these happened after talks were unilaterally cancelled by the Philippine government despite breakthrough achievements like a common draft on the agrarian reform and rural development of the current substantive agenda of Comprehensive Agreement on Social and Economic Reforms. It was almost 20 years in the making. President Rodrigo Duterte then proceeded to tag as terrorists his counterparts in the peace talks.

Ka Rey is a writer, former physics teacher and scientist. But the scientist part, maybe, he was not able to pursue as much as he attended to the growing demands of his commitments to his advocacies and activism. He remained a writer and a teacher, nonetheless, and continued to be part of groups like Aklatang Bayan that documented and published people’s movements histories and their struggles.

Was he an activist in the making? If an activist’s profile is someone smart, critical, socially conscious or a leader, then he definitely had the makings of one.

He graduated valedictorian of Class 1967 of UP High School (now UP Integrated School, where I finished high school). He served as editor-in-chief of UP High’s newspaper. He was an officer of the student council. He was active in socially oriented campus organizations like the Student Catholic Action.

But the government found it more convenient to jail many productive Filipino citizens like Ka Rey.

In May 2021, he became the first petitioner of the Anti-Terrorism Act of 2020 who has been designated as a terrorist by the Anti-Terror Council. The petitions against the constitutionality of the “terror law,” as activist dubbed it, are still pending before the Supreme Court.

“This is a direct injury suffered by a petitioner which should address the question of actual abuse of the ATL,” said his supporters.

They see Ka Rey’s designation as the last so far in a series of terroristic acts by the government.

“Terroristic is labeling the likes of such a soft-spoken, frail, generous, and compassionate teacher, scientist, activist and peacemaker like Rey Casambre a terrorist. Terroristic is branding his ideals and action as promoter of a just-based peace in communities, universities, congregations, dioceses and various other associations here and abroad, as deserving persecution, silencing, even annihilation. Terroristic is depriving the public of his voice that only seeks to enlighten on the roots of our people’s poverty and our country’s hardships is terroristic,” said Ka Rey’s freedom campaign network in a statement.

The tagging was somehow expected, said Xandra, because they have framed his father as plotter of destabilization since October 2018. But the designation is wrong and baseless, as even the law is baseless, she asserted.

“Overbroad, draconian, and we should also point out that it is a result of the US training the crafters of the said law. The ATL casts a wide net to catch anyone and everyone deciding to do something to change the dire situation the country is in, to change the status quo, which is what the current powers-that-be are so very afraid to lose or even just be challenged,” said Xandra.

The law, she said, puts people in real danger.

“Even before the ATL, the NTF-ELCAC, military or police persecutes, arrests and even kills change advocates, rights and environmental defenders, frontliners – even government’s own,” she said, with the December 2020 killing of Dr. Mary Rose Sancelan, Inter-Agency Task Force against Emerging Infectious Diseases head of Guihulngan City, and her husband by an anti-communist militia in mind.

Since her birth, her father has been imprisoned twice.

“What he tells me of being imprisoned and the sacrifices it entails is that this does not even compare to the suffering of millions of Filipinos under a system that lacks justice and peace,” said Xandra.

His father always stresses to put others’ welfare before one’s own.

“He tells us this is not about him, but about the suffering imposed by the system, how people are deprived of their rights, and how any changes to the pervading pro-rich agenda are being stifled. While we assert for my father’s right to be free, he said it is also now more important to continue working to change the wrongs in society,” Xandra said.