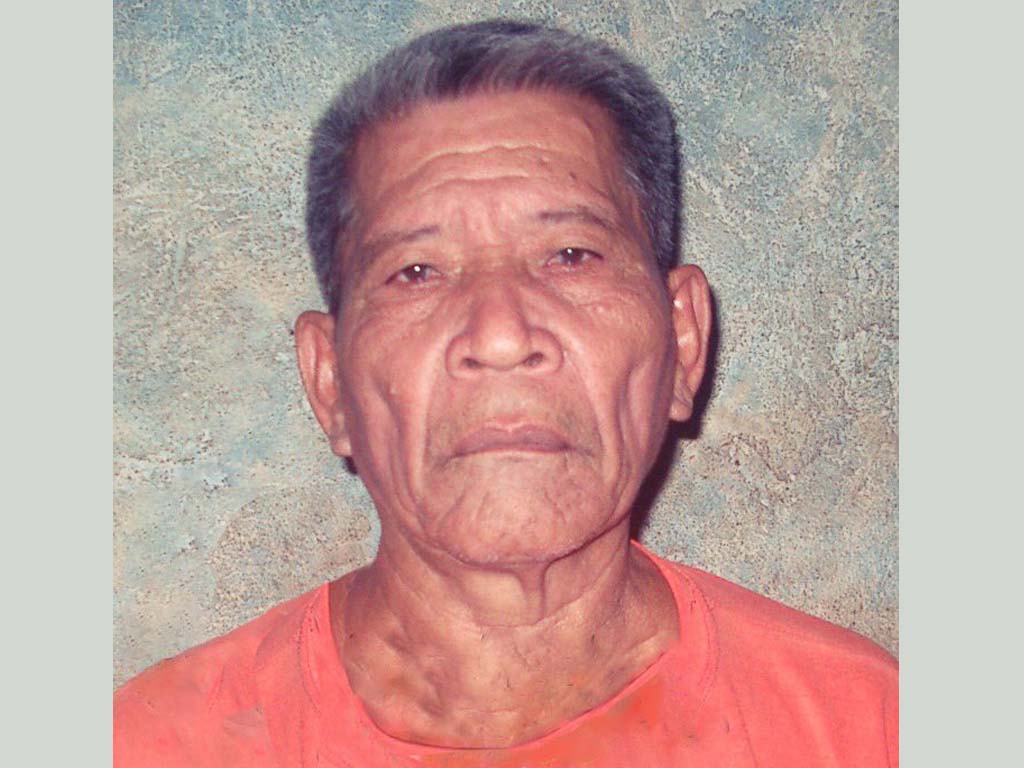 Let him fight for his life as a free man –  political prisoners’ kin group KAPATID beseeched government for the urgent release of the ailing, 75-year old Jesus Alegre on June 13.

But within hours of the same day, Alegre died at the Ospital ng Muntinlupa.

Alegre, a poor farmer from Barangay Taba-Ao in Sagay, Negros Occidental, has been in jail for 16 years after being arrested on April 14, 2005. He was convicted of a murder charge that was used to drive him away from the small plot of land he tilled, said political prisoners’ kin group Kapatid.

“After 16 years of wrongful conviction he deserves to be well-taken care of by medical experts and his family,” Kapatid said in their June 13 statement.

Alegre will be reunited now with some members of his family but only in his death.

His wife Moreta, now 74, and son Selman, 47, were also convicted and jailed. Moreta is now imprisoned at the Correctional Institute for Women (CIW) in Mandaluyong, while Selman is also at the NBP Maximum Security Compound.

The couple spent four years at the Sagay Prison in Negros Occidental before getting transferred to Metro Manila. Alegre was jailed at the New Bilibid Prison (NBP) Maximum Security Compound from 2009 up until his passing.

“His death shows up the terrible state of the highly congested prisons in the country, making the call to release prisoners whose lives are at risk from COVID-19 most exigent,” said Kapatid Spokesperson Fides Lim.

Kapatid raised alarm over political prisoners’ deaths in the last 32 days—Jesus being the fifth, after the deaths of Joseph Canlas and Maximo Redota just last May.

“How many more prisoners should die before government can act?” asked Lim.

Human rights group Karapatan documented more than 700 political prisoners in the country. Of the number, more than 50 are elderly and more than 90 are sick.

Before their incarceration, the Alegres were simple fishermen and did farming in their small land when not fishing.

Moreta is illiterate while Jesus could write his name but could barely read and write. But they have raised their children to be schooled with the income they got from fishing and tilling their land. They have seven children.

They lived by fishing and selling copra and tuba (native wine), byproducts from the coconuts they planted on more than a hectare of land they tilled.

Human rights group Karapatan’s documentation of the Alegre case showed that the Alegres fought for the land they are cultivating against a landlord.

After four hearings, Jesus, Moreta and Selman were convicted and sentenced to reclusion perpetua or life imprisonment in 2005.

In a letter to Pope Francis for his visit to the Philippines in 2015, Jesus was quoted:

“We are suffering for sins we did not commit. Is it because we do not have money and power? We only want to live simply, to till our small piece of land so we can live. Where is justice?”

“What kind of government jails a family for 16 years and ignores all appeals for their freedom although the elderly Alegre couple is eligible for pardon and humanitarian release especially at this time of pandemic?” said Lim.

She said the couple were in the lists of old and sick political prisoners that Kapatid lobbied with government offices for release.

They were also included in the petition Kapatid filed in the Supreme Court (SC) in April 2020 for the urgent release of elderly, sick and pregnant due to vulnerability to COVID-19 in the over-congested jails in the country. The petition was remanded to the lower courts for resolution, but was only announced after a five-month wait in September despite being decided in July.

The SC treated the political prisoners’ petition as an application for bail or recognizance “as well as petitioners’ motions for other confinement arrangements.”

The High Court said that the offenses charged against the petitioners are punishable by reclusion perpetua, hence, bail cannot be availed of as a matter of right. Trial courts would have to determine that evidence is not strong to allow their release. This then meant that the trial on the cases would proceed as usual.

Former SC Chief Justice Diosdado Peralta, before his retirement in March, said 122,178 persons deprived of liberty or PDLs have been released on reduced bail or recognizance among others.

The releases were from March 17 last year to February 11 this year, when the SC under his watch tried to keep the courts open, working and accessible despite the lockdown. This was also in an effort to decongest jails as the country battles the pandemic.

Kapatid also submitted the names of the elderly Alegre couple to the Department of Justice (DOJ) at least four times from December 2019 to December 2020, so they could make it to the Christmas list of elderly prisoners to be considered for executive clemency.

“But we have not heard anything from the DOJ. Silence means inaction, and inaction can be tragic,” noted Lim.

Kapatid called for a full investigation into the death of Jesus “to ascertain the responsibility and accountability of government agencies in looking after the health and safety of persons deprived of liberty.”

Deterioration of health in jail

Jesus and Moreta have been suffering from arthritis and hypertension since their incarceration.

In February this year, Jesus was brought to the Ospital ng Muntinlupa for check-up and laboratory tests due to the efforts of Kapatid. He was diagnosed with chronic obstructive pulmonary disease, diabetes type 2, ischemic heart disease, and possible chronic kidney disease. Kapatid said they had to shoulder all his medical expenses.

On June 11, Jesus reportedly showed increased signs of weakness and disorientation. He had diarrhea, swollen lower limbs, vomited his food and could no longer sit or stand up without support or go to the toilet.

On June 12, Alegre, who had been in and out of the hospital inside NBP and in Muntinlupa, was brought back to the NBP hospital. Reports said that he has difficulty breathing, his legs are swollen, and he can no longer sit or stand up without support. He vomited his food and suffers from diarrhea for a week now. He has become very thin and disoriented, and can no longer reach the toilet to urinate or defecate.

Jesus was also very depressed and kept on saying he will be released from prison soon.

But it was only around 7am of June 13 that Jesus was brought to the public hospital of Muntinlupa where he expired around 10:30am. Whether he was tested for COVID-19 had yet to be confirmed.

The Department of Justice, which supervises Bureau of Corrections (BuCor) jails such as the NBP and the CIW, said that two to three PDLs die behind bars each day on average.

Last year from January to June, 476 PDLs died according to BuCor. Of these deaths, 21 were due to COVID-19, but many others had pre-existing medical ailments.