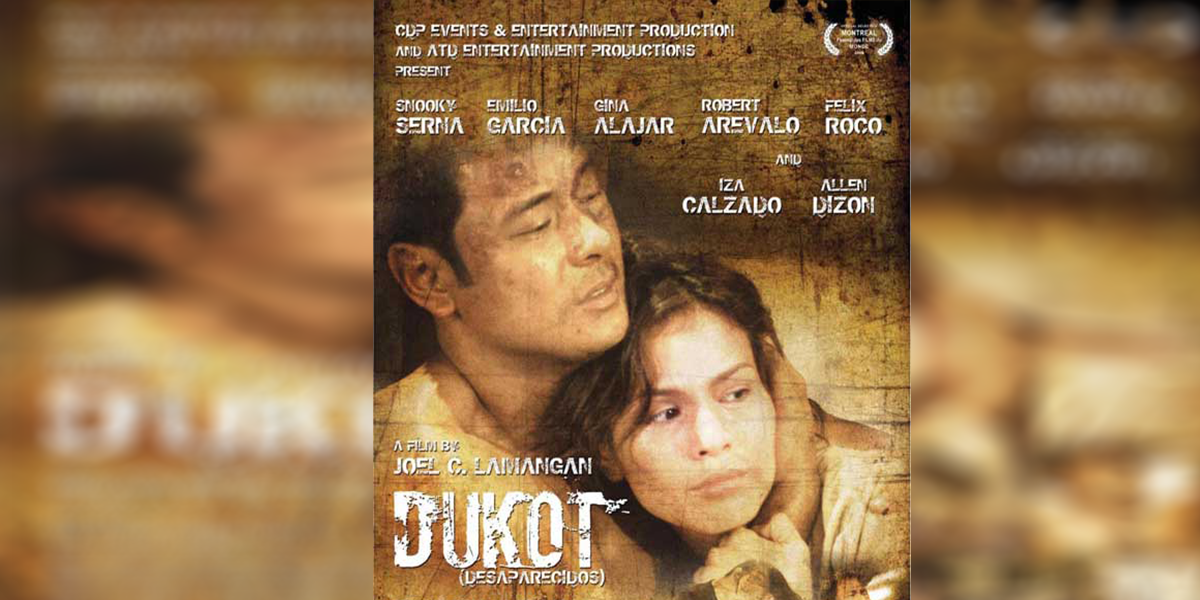 The indie film “Dukot,” directed by Joel Lamangan, made its premiere 10 years ago, and yet the topic it delves into remains relevant to the times.

A free screening of the film was held on September 6 at the University of the Philippines Diliman Cine Adarna as the College of Mass Communication is set to honor the film’s screenwriter Bonifacio Ilagan as this year’s Gawad Plaridel Awardee.

The film opens with a scene that is already not uncommon to us — activists forcibly abducted by military intelligence agents. In the film, full-time activist Junix Etrata meets his girlfriend, Maricel Salvacruz, a call center agent, but they were kidnapped by men claiming to be from the New People’s Army, the armed wing of the Communist Party of the Philippines. Of course, that is a lie.

Both underwent inhumane torture, as the men try to force them to admit they are NPA fighters and name their comrades. The film is gritty in showing the abuses upfront, making it more disturbing that you can hear shocking reactions from the audience.

Lapses such as the tendency to overdo some dramatic scenes accompanied by domineering sound score, and the erratic editing that results to confusion to the flow of the story are forgivable, as the twists and turns of the plot grip the audience’s attention to the very end.

Meanwhile, the love story of Junix and Maricel elicited ‘kilig’. However, it is not the kind of love story that we are used to seeing in mainstream romantic-comedy films. It is mature and sacrificial. It is also complex. Junix has dedicated his life in the mountains to serve the indigenous people, while Maricel quit activism to work in a call center and provide for her family.

Superb acting from the film’s highly competent powerhouse cast is also praiseworthy. Gina Alajar as the mother of Maricel was able to capture the confusion of a suffering mother, who later in the film underwent transformation. Iza Calzado and Allen Dizon also delivered believable performances, which made the film even more effective.

Although some dialogues tend to be a bit preachy and unnatural, the film did not shy away in tackling a tough yet relevant topic, such as forced disappearances and extra-judicial killings. The film makes its audience understand the real dangers that activists have to face for their causes.

Released during the time of former President Gloria Macapagal-Arroyo when human rights violations are rampant and involuntary disappearances are high, the film remains relevant. Activists today are still being demonized and killed, as if the act to call for social justice is a crime.

“Dukot” is not the kind of film that makes you happy, but its power lies to the fact that it alarms its audience to the injustices that are happening in the country, and we should not turn a blind eye to them.