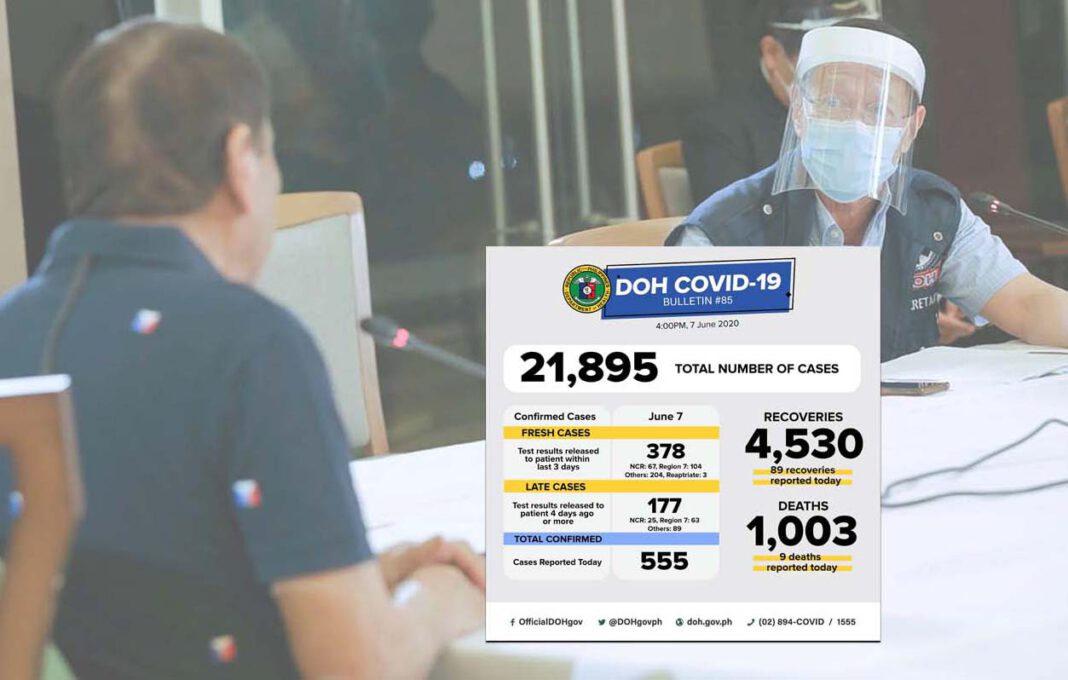 The Department of Health (DOH) reported nine deaths on June 7, bringing the total to 1,003. These deaths are of those confirmed for COVID-19.

There are many more deaths with pneumonia cases or with symptoms same as COVID-19 but were not tested during this period of the pandemic, as the government’s testing capacity struggles below their own target and “mass testing” levels. These deaths have yet to be accounted and reported by the government if they would be included in the COVID-19 mortality as some countries are also reviewing their death toll.

The DOH also continue to pile up its validation backlogs. There are 27,375 positive cases in the country, but DOH only reported the confirmed 21,895. The DOH has yet to validate 5,480 positive individuals. Validation backlogs have been piling up since April.

Compensation for health workers who died or gotten severely ill

DOH said that all 32 checks of P1 million to the 32 health workers who died have already been prepared. Of these, 25 have been received by the families, 5 have final pending documents such as Special Power of Attorney before they can receive the checks. The two remaining families have immediate families outside the country which was why they cannot immediately facilitate the compensation or have to designate kin who will receive the check on their behalf.

Meanwhile, the 79 health workers that the DOH reported to have contracted severe or critical cases of COVID-19 was down to 42. The DOH validated the number following the submission of their medical abstract. Some were mild cases and not severe as initially reported. Ten checks out of the 42 have been prepared.

DOH Secretary Francisco Duque III blamed his staff for the delay, but later took responsibility for it following backlash from netizens.

[It’s really shameful, sir. They lost their loved ones but my staff dillydallied like they have no sense of urgency.]

Amid repeated calls for his resignation over various controversies, Duque was again spared by Duterte in that June 4 meeting. Duterte said he will sacrifice officials not acting fast enough, but said Duque is not one of them but may also be dismissed.

“And since it’s an absolute thing for lack of – total lack – total loss of confidence, I’m removing them because they are not functioning,” he said.

“And if we have to move fast, I will sacrifice you even if you are not really a laggard,” he said to Duque.

But later in his Twitter account, Duque said he was not washing his hands of the issue as netizens commented on his tweet telling him to resign.

While I expressed disappointment towards some members of my team, I acknowledge that this is still my responsibility as SOH. I will make sure that we comply with the Bayanihan to Heal As One Act, with proper documentation and identification of HCWs.