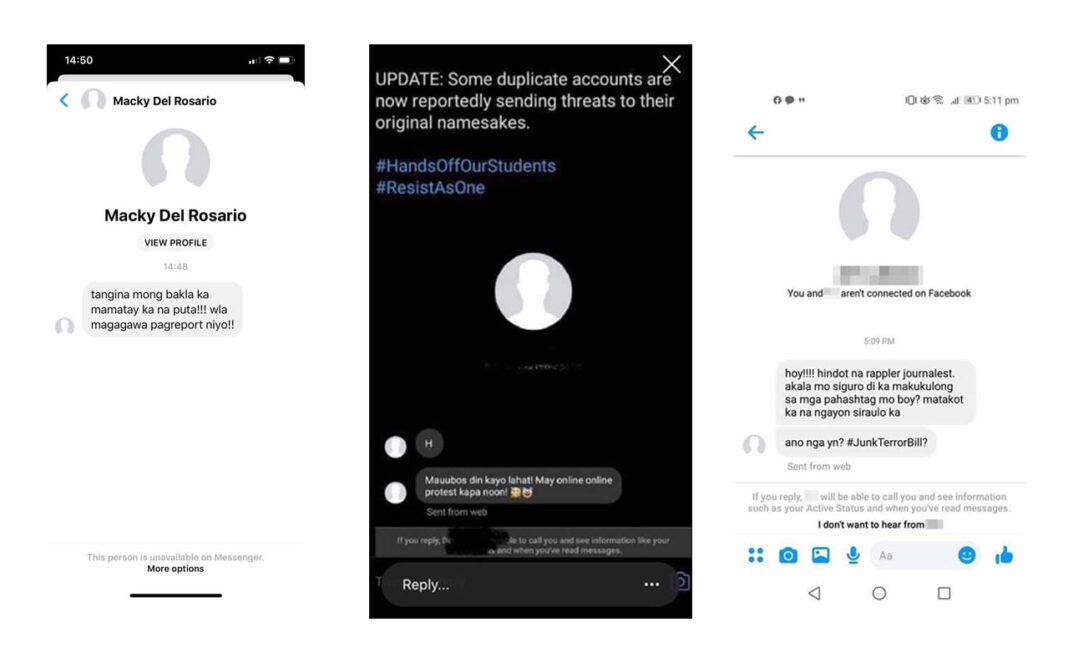 Since June 6, hundreds of Facebook users complained of having found fake accounts bearing their names. Many pointed out that this is the work of paid trolls that have been around since 2016 elections or earlier and grew in number to this day. Many of these trolls have been pushing government agenda using a similar “script”, battling out President Rodrigo Duterte’s critics or pushing for a better image for some politicians.

Tug-ani, UP Cebu’s official student publication was the first report to call attention to the proliferation of fake accounts. This happened only a day since protesters against Anti-Terrorism Bill in the campus were arrested and continue to be detained.

Other UP campuses reported of the same incidents, prompting the UP system to issue a public advisory.

Some users would have as few as one dummy account to as many as 16.

The fake, dummy, duplicate accounts started with no profile photos and duplicate of full names or Facebook user names (even when some did not use their full names on Facebook or even if their names are not very common). Some fake accounts would have variation in spelling, an added ‘h”, “s” changed to “z”, or an additional vowel at the end of the name, etc.

Some who did not find dummy accounts earlier in the day would discover one later on.

One reported to have been locked out of their account after fake accounts surfaced.

Shit! My friend got locked out and was asked to confirm her identity by uploading a copy of her ID. May mga fake…

A Google docs created for Facebook users to put in links to their fake accounts so it can be batch reported had been deactivated, but it had more than 700 accounts on the list before noon.

Many updated that their fake accounts have been deactivated.

Facebook said it is probing reports of inauthentic accounts on its platform in the Philippines. The social media platform said they are working to validate the authenticity of these accounts and should the accounts fail to pass through authenticity checks, the accounts will be removed. The company said users should continue reporting fake or impostor accounts.

The company said the company removed 1.7 billion fake accounts from Facebook globally in the first quarter and those are trying to create fake accounts that it blocked at the time of account creation are in the millions. The company also said only 5% of their monthly active users are fake accounts.

Department of Justice Justice (DOJ) Secretary Menardo Guevarra said the emergence of fake accounts gives him “cause for worry.” The DOJ Office of Cybercrime asked the public to report incidents of fake account to their office and report the fake accounts to Facebook as well.

The National Privacy Commission said they are monitoring reports on the proliferation of fake accounts on Facebook. They said they have brought this to the attention of Facebook and requested a report of Facebook’s findings as soon as they become available. 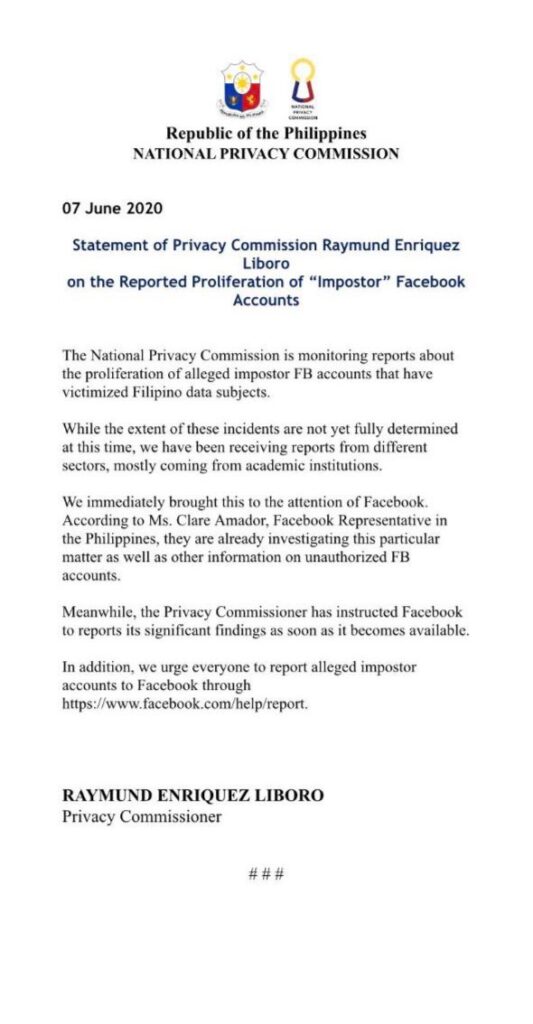 Bayan Metro Manila said the proliferation of fake Facebook accounts is meant to derail the growing public opposition against the draconian Terror Bill or the Anti-Terrrorism Bill that both houses of Congress have passed and is only awaiting to be transmitted to the president for his signature for it to become law.

“This is the handiwork of a government-backed cyber army as evidenced by the systematic and massive coverage of the cyber crackdown,” the group said in its statement.

The group said one objective of proliferation of fake accounts is to instill fear among Internet users, discourage others to oppose the Terror Bill, and silence critical citizens even if they are not affiliated with any political group.

“This is another reason why the Terror Bill must be rejected,” said the group.

Reporting the fake accounts would preoccupy many users most of Sunday.

Some reminded that this is still about the public outcry against the anti-terrorism bill. Some said the people must continue to voice out and protest against the bill because the distraction and harassment is part of the ploy.

Focus on the bigger picture.
We need the government to do better. #JunkTerrorBillNow#MassTestingNowPH

STAY ALERT: A surge of fake accounts on Facebook has caused alarm to its users, some have been reported to be sending threats to their namesakes. Check your names, your friends', and your family's, report any suspicious accounts with the same names.#ResistAsOne pic.twitter.com/RGnPS7tBrY