Home NEWS Worse off than when lockdown started? Highest cases since March 31, backlogs... 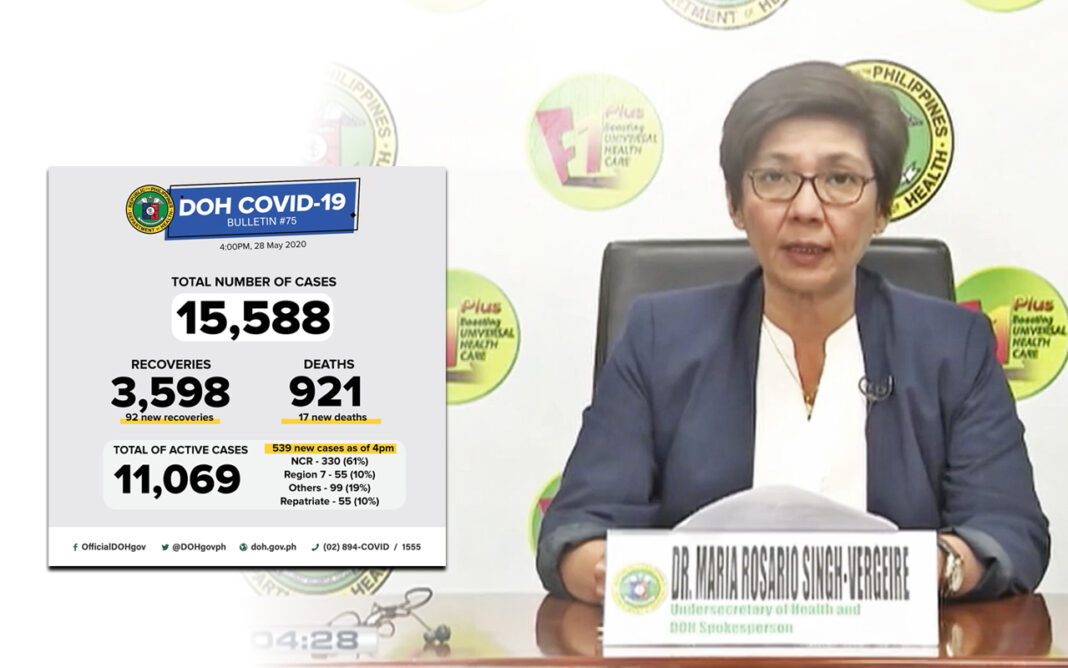 The Department of Health (DOH) reported 539 new cases on May 28, the highest reported in a day since March 31 (538), bringing the total of confirmed cases in the country to 15,588. Cases in the last seven days also rose steadily until today’s record-breaker.

With the rise in cases and still low testing done and the staggering economic losses due to the lockdown, are we worse off after enduring the longest lockdown in the world of 77 days by May 31?

Those who have tested positive for COVID-19 in the country is actually at 22,083. The DOH has validated 6,495 less than the total number of positives.

DOH Usec. Maria Rosario Vergeire said the rise in cases is because they were able to hire more encoders.

So, will the surge in cases in the coming days due to more encoders be artificial since the validation backlog has been going on for a month, with around 200+ cases adding to the backlog every day?

Then what does this backlog mean all along for the Health agency and many experts’ readings of ‘flattening the curve,’ ‘slowing down of cases’, ‘slower doubling time’ and other such interpretations that were supposed to inform the actions the government would take—most especially why they imposed the lockdown in the first place, why it was extended three times in Metro Manila and why it will be lifted.

Then there is also the testing backlog of 3,683 as of today.

Vergeire said the testing backlog is at 7,000 on Monday and they aim to eliminate this backlog tonight. The testing backlog refers to samples that are not tested, or test results that are not released beyond 72 hours. The DOH said their target is to run tests 48 to 72 hours upon receiving samples. The 3,683 is different from the 6,495 positives that still needs validation.

Vergeire said testing limitations and testing and validation backlogs were due to limited supplies, manpower and laboratories.

One of the primordial issues – and one that should have also counted for whether Metro Manila is to be placed under lockdown to begin with – is the country’s achievement and ability in testing for COVID-19. There were only 52 cases, three deaths and around 1,000 tests when the lockdown was imposed–and the numbers just grew after more than two months.

The country is not testing enough and COVID-19 cases may surge when the country finally does mass testing. As of May 26 (the latest testing data available is two days ago), only 289,732 unique individuals were tested or 0.27% of the population. With 22,083 found positive, the positivity rate is at 7.6%.

Presidential Spokesperson Harry Roque said when he clarified his “no mass testing program” statement that in the government’s “expanded targeted testing,” the benchmark is to test between 1% or 2% of the entire population or 1.06 million up to 2.12 million people. For Metro Manila, considered the epicenter, the benchmark is to test 10% or around 1.3 million at the minimum.

Government’s COVID-19 testing program mandates only specific individuals to undergo testing procedures. Only to be tested are the following:

This testing protocol remains limited as even health workers or other frontliners, if they are asymptomatic, slide lower in the rank of priorities to be tested.

Government mulled to move National Capital Region (NCR) from the current lockdown regime of modified enhanced community quarantine (MECQ) to general community quarantine (GCQ) or the new normal. Metro Manila mayors recommended the move to ECQ. Inter-Agency Task Force on Emerging Infectious Diseases (IATF), government’s policy making body on COVID-19 response, approved Resolution 40 that recommends to the president to move NCR to GCQ and only Cebu City would remain in the strictest quarantine of MECQ until June 15. Roque said in his TV guesting in Wowowin on May 27 that the economy needed to be opened up “dahan-dahan, onti-onti at hinay-hinay” (little by little) or also DOH to IATF because the cash aid for those affected by the lockdown is running dry.

The lockdown ends in Metro Manila ends on May 31. But for the last three times it was supposed to end, it didn’t. The public is expecting President Rodrigo Duterte to announce his decision on the lockdown tonight.