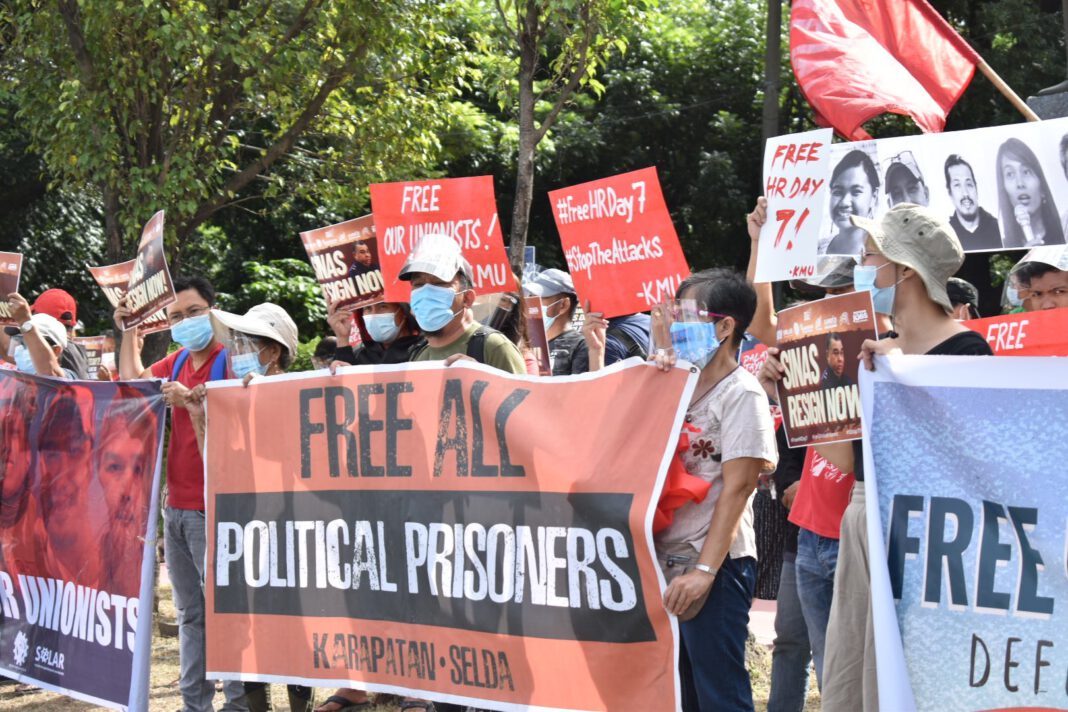 January 10, 2021, activists rallied in front of the Commission on Human Rights (CHR) at Commonwealth avenue recalling the unjust, illegal arrest and detention of six trade unionists and a journalist on the basis of fabricated search warrants and trumped up charges for possession firearms and explosives. The members of their family, friends, and colleagues demand justice, drop the charges and release them unconditionally. They shouted for the resignation of Philippine National Police Director General Debold Sinas as the mastermind of trumped up charges by using his cohort and unjust judge of Quezon City.

The illegal arrest is a mockery to the commitment of the Philippines in adhering to the Universal Declaration of Human Rights as it was done on the Human Rights Day. Unionism and journalism are not crimes under the Philippine constitution. The rights of these illegally arrested individuals should be upheld, protected, and promoted as they are working to serve the workers who are the direct victims of government’s lockdown due to pandemic and deprived of social ameliorations.

The evidences presented in court by the PNP operatives are planted. Keeping and possessing firearms and explosives in homes which have security guards and cameras are unbelievable. The arrested union organizers and alternative media worker were ordered to lie face down and/or face the wall for an hour before the raiding team freely searched their belongings.

Raiding homes at dawn or at night and presenting firearms and explosives allegedly possessed by the victims in court are the common modus operandi of the PNP and Armed Forces of the Philippines (AFP), now, under the direction of the National Task Force to End Local Communist Armed Conflict (NTF-ELCAC), which is being chaired by President Rodrigo Duterte. The Human Rights Day’s PNP/AFP operation is no different from the raid and arrest of other activists and peace consultant in Metro Manila since 2019.

On August 26, 2019, peace consultant Esterlita Suaybaguio, a former teacher from Mindanao was illegally arrested by a joint military and police team at her condominium unit in Cubao, Quezon City, which was planted by a 9mm pistol, a hand grenade, several rounds of ammunition.

On October 31, 2019, Gabriela-Metro Manila spokesperson Cora Agovida and her husband Michael Tan Bartolome were forcefully and illegally arrested at dawn raid at their home in Manila which the police claimed that the raiding team “recovered a.45 caliber pistol and two grenades from the residence of the couple.”

On November 5, 2019, the PNP raided the office of Bagong Alyansang Makabayan-Manila at Tondo, Manila at around 1 a.m. and illegally arrested were Ram Carlo Bautista, Bayan Manila campaign Director; Alma Moran, member of the secretariat of Manila Workers Unity; and Ina Nasino, Kadamay Manila coordinator. The raiding team allegedly found “guns and bombs” in their possession.

Planting of explosives by the police and military are easily done because the victims are being segregated, controlled and neutralized with the use of force and threatened to be killed which can easily be declared as “nanlaban” or executed in “tokhang style”.

Extra-judicial killing happened to former NDF consultants Agaton Topacio and Eugenia Magpantay, who were killed in a police dawn-raid November 25, 2020 at Angono, Rizal which the raiding team claimed that they were killed upon “exchanged of fire.”

On December 17, 2020, five arm workers were massacred by combined elements of the PNP Police Regional Office 4A and the AFP’s 2nd Infantry Division in Sitio Malalim, Brgy. San Juan, Baras, Rizal as allegedly “they were supposedly serving arrest warrants against NPA rebels in the area.”

The PNP and AFP declared the same lies to justify the mass murder of nine Tumandok leaders and illegally detained 16 others in Tapaz, Capiz, and Calinog, Iloilo on December 30, 2020.”

Extra-judicial killings, illegal searches and arrests, filing of fabricated charges, red-tagging and other harassment activities related to people’s activism will worsen as the government’s campaign of the time of the downgraded objective of “weakening” the NPA by 2022. This year, the budget allocation for the office of the President, NTF-ELCAC, DILG, AFP and AFP Moderation have a sum of Php 839.3 billion. These funds do not yet include the increase in budget allocation for the PNP and other projects of the NTF-ELCAC channeled through various civilian government agencies. However, these funds will become “money-making” works of the Duterte regime as they all know that armed conflict cannot be resolved without addressing its root causes.

Today, we vehemently and persistently condemn the Duterte regime in carrying the policy of attacking the legitimate organizations. Union organizing is not a crime and so is truth-telling. Further, asserting the people’s rights for jobs, freedom and democracy is not a crime.

We demand for the immediate release of Human Rights Day 7 and all political prisoners. Justice to all victims of extra-judicial killings and victims of trumped up charges.