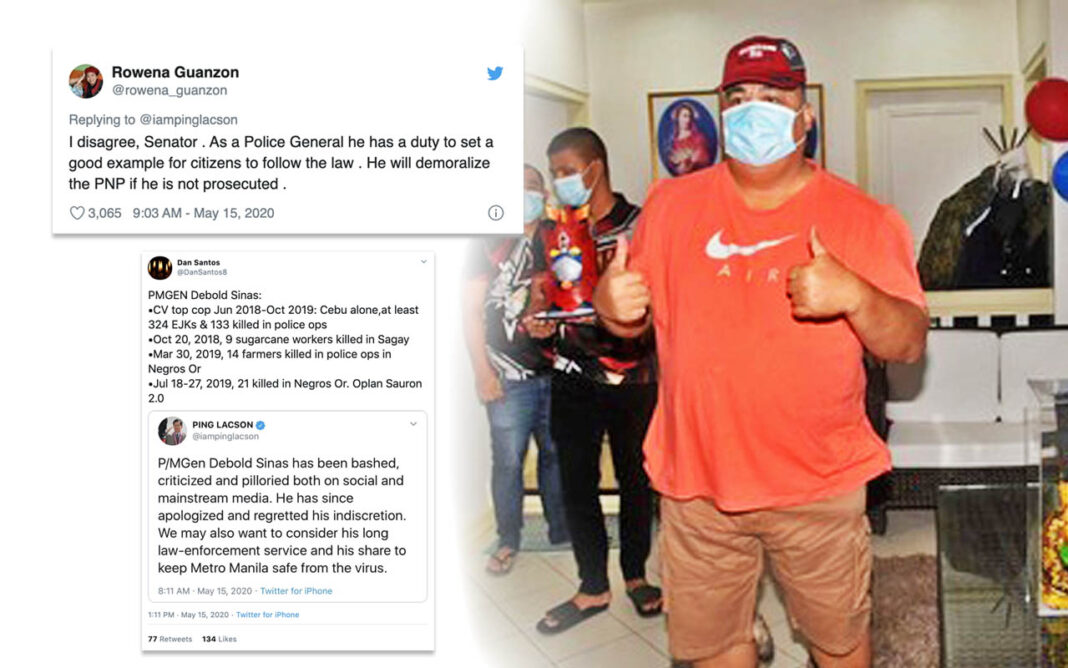 Senator Panfilo Lacson in his Twitter account asked that the service record of National Capital Region Police Office (NCRPO) chief Major General Debold Sinas may be given thought amid all the bashing one of the country’s top cops received following his birthday party during the lockdown.

“P/MGen Debold Sinas has been bashed, criticized and pilloried both on social and mainstream media. He has since apologized and regretted his indiscretion. We may also want to consider his long law-enforcement service and his share to keep Metro Manila safe from the virus,” said the former police chief-turned-senator.

“I disagree, Senator. As a Police General he has a duty to set a good example for citizens to follow the law. He will demoralize the [Philippine National Police] PNP if he is not prosecuted,” said Guanzon.

“Sinas’ years in service is, in fact, aggravating not a mitigating circumstance . With so many years in service he should have known that what he was doing as a Chief NCRPO was against the law,” she replied to another tweet.

Another tweet recalled the human rights record of Sinas in the recent years when he is already one of the top cops of the PNP.

This does not yet include his ‘human rights record’ in Negros.

Nine sugarcane workers, including two minors, were shot dead by some 40 armed men in what authorities described as a “massacre” in a plantation in Sagay City, Negros Occidental in October 2018.  The victims were all members of the National Federation of Sugarcane Workers (NFSW) who have long been fighting for land rights of farmers.

Six persons were killed while 15 were captured in simultaneous “police operations against loose firearms” and illegal drugs in 25 towns and cities in Negros Oriental in December 2018. Five civilians, including a barangay kagawad and a construction worker in Guihulngan City, were killed. Another one was killed Santa Catalina. The police served 26 search warrants in the mountainous villages of Guihulngan City, La Libertad, Mabinay, Santa Catalina in Negros Oriental.

At least 16 were arrested, including farmers who are kin of known New People’s Army (NPA) leaders in the area. The police operations were conducted a day after the NPA celebrated the 50th year of the Communist Party of the Philippines (CPP) in  an undisclosed place in Negros Island.

Sinas said then they focused on Guihulngan City, which they believe has lots of loose firearms. They have 113 warrants in Negros Oriental; 83 of them in Guihulngan.

In March 2019, 14 farmers were killed in two towns and one city in Negros Oriental during coordinated operations by the PNP and the Army “against illegal firearms held by suspected communist rebels.” One of the fatalities was a lay minister at the Canlaon Parish and church officials in the region said that others were not even shown the arrest warrant.

At least 21 people were shot dead in Negros Oriental from July 18 to 27, with a city councilor, a former municipal mayor, four police officers, a village chief and a lawyer among the victims. Sinas said these were “separate cases” so it was not a cause for alarm. By end of July, then PNP chief Gen. Oscar Albayalde sacked Col. Raul Tacaca as Negros Oriental police chief (meaning he would be reassigned) following spate of killings in the province, but Sinas continued to show support for Tacaca.

Part of the operations against communist rebels on the island was “Oplan Sauron 2.0,” which the government newswire Philippine News Agency said is “an internal security plan against personalities connected to the Communist Party of the Philippines (CPP), New People’s Army (NPA), National Democratic Front (NDF).”

In other words, according to groups of human rights defenders and lawyers, the plan’s targets included civilians or unarmed people that the authorities deemed connected to the CPP, NPA and NDF, which was why activists have protested against “red-tagging.” Human rights defenders have also reported many victims of political killings were those who were red-tagged by the military or police before they were killed.

Arriving in NCR “with a bang”

Anakbayan Metro Manila said it was the plan of Sinas to “arrive with a bang” with office raids and persecution of activists in NCR, but “he will now go out with a fart“ due to his mañanita controversy.

The youth group said that when Sinas arrived in NCR in October 2019, he planned to replicate Oplan Sauron in NCR with Oplan Kapanatagan, with 150 cops from his region in tow.

Sinas disclosed that he deployed a number of personnel in Metro Manila to serve as his Red Team, or motorcycle-riding cops who would spy on suspected erring cops in Metro Manila. The move raised questions and issues on duplication of tasks of other units of the PNP, demoralization of forces in NCR and issues of favoritism likened to one raised against Albayalde, as the NCR already had 27,000 policemen and Central Visayas around only 9,000.

“Cora Agovida of Gabriela NCR was arrested inside her home with her husband and two kids, age 10 and 2. The police told them to drop to the floor, pointed guns even at the kids, arrested them with the kids and then separated the kids from the parents at the police station. The younger one still breastfeeding did not see his mother for a day and the older kid asked if his parents were dead. You have got to be kidding if you want compassion for Sinas,” said the group.

This October 21, 2019 incident was followed by the office raid of BAYAN Manila in Tondo  and the arrest of three activists, including a pregnant Reina Nasino on November 5, over illegal possession charges that the activists countered were planted. Nasino is six months pregnant and has been in jail for that long. Calls to release Nasino on a humanitarian basis remain unheeded.

The police reportedly secured 10 search warrants from a Quezon City executive judge, a few of them served in Manila and Negros on October 31, effecting the arrest of 5 activists in Manila and more than 50 in Negros.

Some activist, human rights, independent research and media groups conducted their own office search to show there were no guns in their office and to prove that the presence of such in case of a police raid could have only been planted. No other offices were raided or activists arrested in NCR during this time.

“The sinister moves of Sinas in NCR were effectively opposed by the people,” said Anakbayan Metro Manila.

The group surmised that the plans of Sinas “were ultimately sidetracked with the controversies of recycling of drugs and reinstatement of cops involved surrounding then-PNP chief Albayalde just before he retired, causing congressional hearings and the president delaying the appointment of the next PNP Chief.”

“The ‘police shooting themselves on the feet’ with the exposé of controversies surrounding Albayalde would sidetrack Sinas’ grand plans for counterinsurgency in NCR. But now, we have worse with the de facto martial law lockdown,” said the group.

“Taking into consideration the past and present good deeds of P/MGen Sinas does not suggest his absolution from punishment, but only a little compassion by not rubbing salt to injury by posting fake and outdated photos to sow more hatred and exploit some people’s naïveté,” said Lacson a few hours his first tweet drew flak from netizens.

Many still replied in disagreement with the senator. The various replies raised the several “double standards” that the public has witnessed so far when government officials aligned with the administration violate the law, from Senator Aquilino “Koko” Pimentel to OWWA Deputy Administrator Mocha Uson. They also raised the issues of police abuses in the implementation of the lockdown such as “quarantine violators” being beaten up by police and one Winston Ragos who was shot dead.

Sinas apologized for the event but said he did not find anything wrong with his “extraordinary birthday celebration” (as posted on the NCRPO website as part of the day-to-day activity of Sinas) on May 8. Before the apology, he gave various explanations, such as that the photos posted by the NCR Public Information Office are old photos, and that they were edited photos, and that it was not a party.

The Malacañang Palace said they will leave it up to the police to do their investigation. On Friday, the PNP Internal Affairs Service said they planned to file charges on violations of quarantine protocols against Sinas and 18 other police officers already identified in the photos.

The police reported more than 100,000 curfew or quarantine violators have been apprehended in April. Curfew or quarantine violators are mostly those found outside their homes without a quarantine pass issued to one member of every household. Additional cases were charged or announced to be charged against those accosted, such as disobedience to authority, usually when they question their arrest, and resisting arrest to those who physically resist arrest.