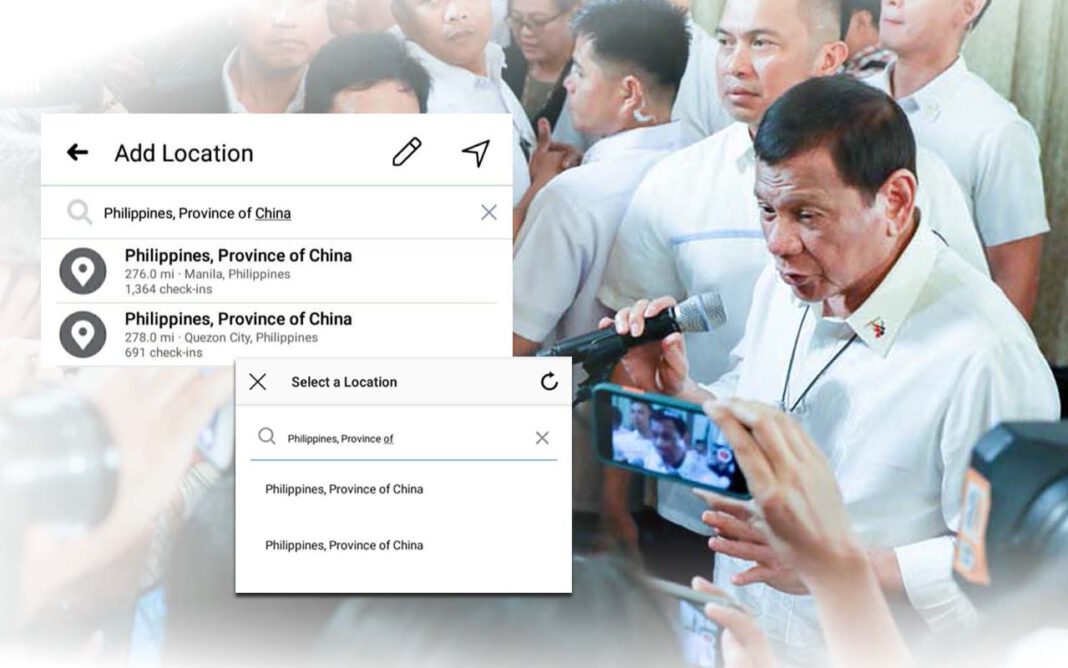 Social media platforms including Facebook and Instagram has “Philippines, Province of China” as an option for location check-ins.

This did not please the many Filipinos who are yet enraged or disappointed with how President Rodrigo Duterte’s administration is handling the issue with China’s aggressive development and militarization over the seas and isles in the exclusive economic zone and territories of the Philippines.

The president’s ‘conciliatory approach’, moves for cooperation and negotiation with China and non-raising of the arbitral ruling victory of the Philippines is an unpopular stand of his, despite surveys continuing to post his high popularity ratings.

Netizens expressed their ire with the hashtags #AtinAngPinas and #PHNotForSale with their dissent on Twitter and Facebook.

Where did this come from?

The option was thought to have become accessible through geotagging. Geotagging is the way of adding land recognizable proof metadata to different media, for example, a geotagged photo or video, sites, SMS messages, QR Codes or RSS channels and is a type of geospatial metadata. The social media platform’s algorithm amassed various uses that later made this an actual option.

Where has this been idea been heard before?

[If you want, just make us a province, like Fujian.]

“Province of Philippines, Republic of China,” he added.

This was reportedly met with applause from his audience of Filipino-Chinese businessmen.

Many Filipinos wanted the government to assert sovereignty of the country but Duterte opted instead for negotiations for joint exploration with China. He suggested a sharing scheme of two-thirds for the Philippines and one-third for China.

Duterte also said the Eastern Asian nation is building many military bases in the West Philippine Sea, but “it is not intended for us.”

“It’s really intended for those who China thinks will destroy them and that is America, hindi tayo kasali diyan (we aren’t part of that),” said the president.

On February 26 this year, Duterte said the Philippines has no business being a republic if it cannot fight its own battles. Duterte then offered Filipinos a choice: be a territory of US or a province of China.

It was a day after the anniversary of EDSA People Power uprising that toppled the Marcos dictatorship in 1986.

Philippine vessel BRP Conrado Yap (PS39) was on its way to Rizal Reef Detachment in the West Philippine Sea when it detected “a radar contact of a gray colored vessel,” according to the Armed Forces’ Western Command, tasked to protect the country’s sovereignty in the disputed sea.

The WesCom said the Philippine ship issued a radio challenge to the vessel, which responded, “The Chinese government has imputable sovereignty over the South China Sea, its islands and its adjacent waters.” The challenges were issued repeatedly and both ships went on to their respective voyages.

A task force report following the incident explained that the Chinese ship’s naval gun director — a mechanical or electronic computer that continuously calculates firing against a moving target, and transmits targeting data to direct the weapon firing crew and makes all the main guns ready to fire in under a second — was pointed at the Philippine boat.

The military had then said the Chinese warship had a “hostile intent” and “encroachment within the Philippines’ EEZ is perceived as a the clear violation of international law and Philippine sovereignty.”

On April 28, Department of National Defense (DND) Secretary Delfin Lorenzana downplayed the incident as “not too offensive” and “somewhat offensive.” He also said that while the gun is pointed, it will not fire.

[What we know of that laser gun is that it’s not too offensive. However, the thing is, that laser gun is for target acquisition, so that if they were to use their missile, that’s the first thing they’ll aim so they can see their target.)

(So in that sense, it was somewhat offensive. What they did it is offensive. Also, why do they need to aim their target acquisition radars at our airplanes or ships?]

The Defense secretary added it will not affect China’s donation of medical supplies to the Philippines.

How to remove wrong “Philippines, Province of China” location check-in: