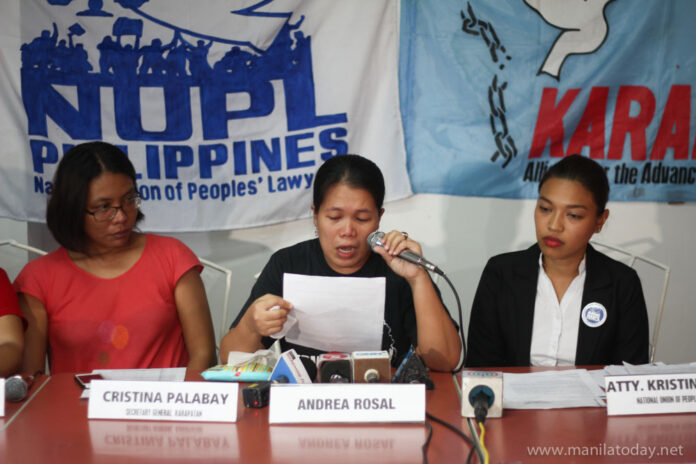 After spending one year and five months in jail, a Andrea Rosal faces the media for the first time after her release.

Rosal was released Monday night from her cell at Camp Bagong Diwa in Taguig City after the Mauban Regional Trial Court in Quezon province granted the petition to dismiss the last murder case filed by Armed Forces of the Philippines (AFP).

Despite having charges against her dismissed, the AFP maintains that she is an NPA, according to a news report by Inquirer.

In a press conference held at a restaurant in Quezon City, Rosal thanked her family, rights advocates and supporters. She also vowed to fight for the release of political prisoners who are illegally detained all over the country.

Andrea Rosal, daughter of former Communist Party of the Philippines spokesperson Ka Roger Rosal, was arrested in Caloocan, April 3 last year on kidnapping and murder charges. She was seven months pregnant at the time of her arrest. Her companion, Edward Lazanas, was also arrested.

On May 16, 2014, she gave birth to baby Diona Andrea at the Philippine General Hospital. Her baby died after two days due to ‘persistent pulmonary hypertension’.

The infant’s death was attributed by human rights group Karapatan to the poor conditions and lack of medical services in jails.

“Andrea Rosal should not have been included in any these charges. There were three charges filed against Andrea and all three of them were junked by the judges for lack, not only of evidence, but of probably cause,” said Atty. Kristina Conti of the National Union of People’s Lawyers.

“It is apparent that charges were filed against her for merely being the daughter of Ka Roger Rosal,” added Conti.

Conti said that those who filed fabricated charges should be held accountable. She added that cases will be later be filed in due time.

As an example, Palabay cited a certain Erwin Rosales, whom she said is a professional witness used by the AFP to implicate Rosal in criminal charges. Rosales was also used as witness in the case against Rolly Panesa and NPA leader Tirso Alcantara.

Panesa, a security guard by profession, was tortured and detained in 2012 after being mistaken as an NPA leader.

In June 2014, Rosal’s family filed contempt charges against Bureau of Jail Management and Penology Senior Inspector Dr. Jaime A. Claveria Jr along with other jail officials.

Aside from pushing for the release of political prisoners, Rosal plans to visit the her daughter’s grave.

In 2014, the Pasig Regional Trial Court denied the petition of Andrea Rosal to attend her daughter’s burial due to security concerns.