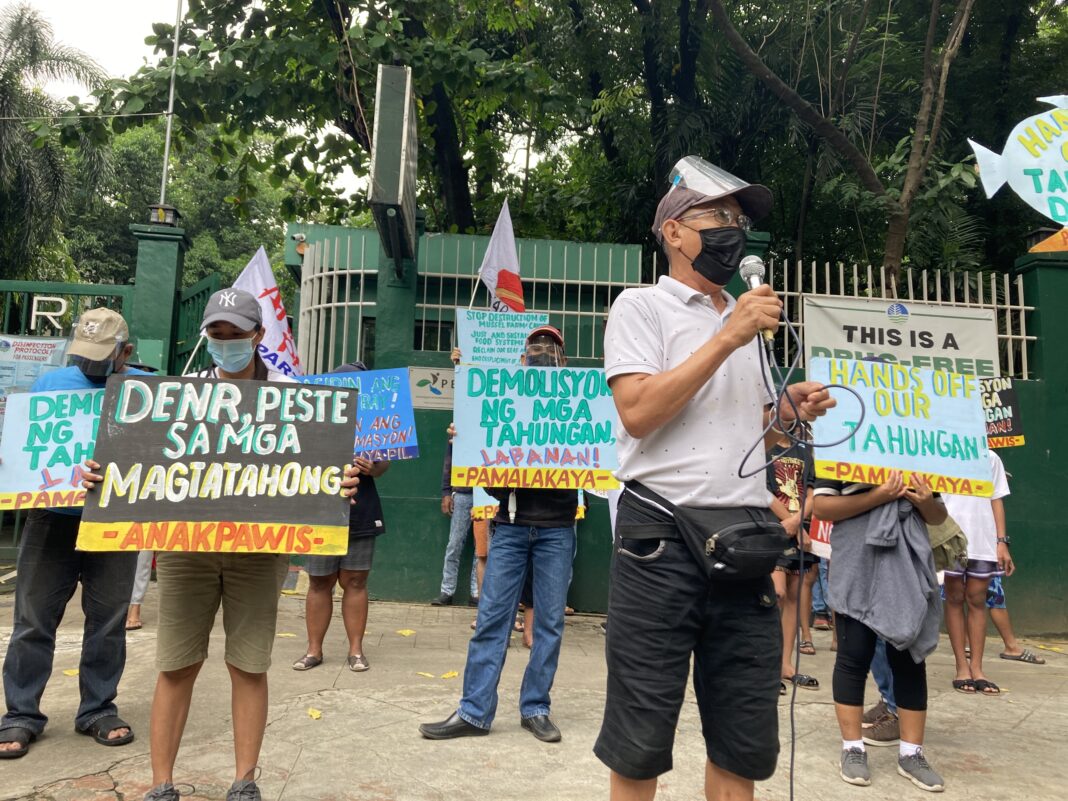 Anakpawis Partylist said a simple scan of the National Expenditure Program 2022 spreadsheet for items on “Manila bay” would yield 108 results with a total of P2.8 billion funding. Most of the budget items were with the Department of Environment and Natural Resources (DENR). But, a huge chunk, P1 billion, is allotted with the National Housing Authority (NHA) for the resettlement program for informal settler families.

“The budget exposes what the program is. It is sham and actually a mass displacement program, instead of an environmental one. The funding for the resettlement program outweighs the ‘Sewer Systems’ and ‘Environment/Sanitary Services,” said Anakpawis Party-list National President and former representative Ariel “Ka Ayik” Casilao.

The item for ‘mass displacement’ was listed as “Resettlement Program for ISFs Affected by the Supreme Court’s Mandamus to Clean-Up the Manila Bay Area.”

“No one listened to our legitimate demands, and now fisherfolk and urban poor communities are being displaced such as the case in Cavite province, with the DENR ordering the dismantling of mussel farms and other fisheries structures,” the former lawmaker lamented.

Casilao questioned the program in January 2019, when he filed House Resolution No. 2452 to include fundamental measures such as declaring Manila Bay as a “reclamation-free” zone, an on-site or in-city relocation for affected communities of 300,000 poor families, the immediate shutdown of the Navotas land fill facility, shutting down of commercial and industrial establishments polluting the bay, and restoration of mangroves, seagrasses, and coral reefs.

Another questionable item, the group pointed out, was the P27-million office supplies budget for the Philippine National Police (PNP). It is listed as for “Office Supplies Expenses” with a description of “PNP Project Convergence on Manila Bay Rehabilitation.”

“We should be vigilant, as the dolomite beach nourishment already cost us P389 million last year and P265 million this year.  A multi-million peso, immoral and senseless project which could easily be demolished by surges of waves in the Manila Bay,” said Casilao.

After receiving backlash on the dolomite white sand dumping last year for “aesthetics” amid the pandemic, the DENR and several of President Rodrigo Duterte’s cabinet officials clarified that only P 28 million of the P389-million contract for “Manila bay nourishment” was used for white sand dumping at a 500-meter portion of the baywalk along Roxas Boulevard. The entire contract, they said, covered the extraction of garbage and other sediments. Various groups doubted this, with the group Infrawatch Ph estimating the cost of sand alone to go as high as P164 million.

In May this year, the DENR confirmed the P265-million allocation for the second phase of the Manila bay beach nourishment project. The second phase included replenishing around 300 meters of the beach area from Manila Yacht Club to US Embassy. It also included the dredging of garbage and silt and the dumping of filling materials to be implemented by the Department of Public Works and Highways.

The Manila Bay rehabilitation program was declared to have officially started in January 2019, with a total budget of P1.7 billion. The program has three phases according to the DENR: cleanup/water quality improvement, rehabilitation and resettlement and education and sustainment.

Casilao demanded the removal of the P27-million budget for PNP’s office supplies, cancellation of the dolomite beach nourishment project, and the implementation of a genuine Manila Bay rehabilitation program that is respectful of the socio-economic rights of affected marginalized sectors.