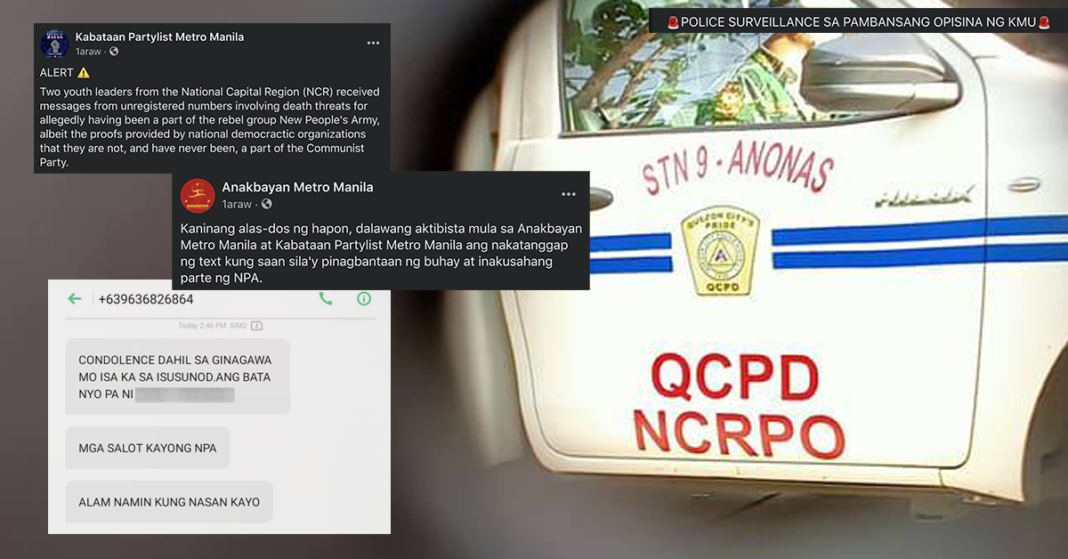 It is about to progress onto the 2nd week of year 2021, also a month since the arrest of the #HRD7; and, yet again, another police surveillance, red-tagging, and death threats were experienced by progressive individuals and group.

[KMU is very much concerned especially that the harassment and planting of evidence have long been perpetuated by the PNP which led to illegal arrests. We affirm that this is among the surveillance and intimidation efforts intended to silence the labor group]

On January 12, at around 9:30 AM., a tinted police mobile parked in front of the national headquarters of labor group Kilusang Mayo Uno (KMU). Prior to this incident, the similar van is reported to have surveilled the area. The said van further circled the street areas within the KMU headquarters and left at around 10:00 AM.

It took another six hours before they noticed that another police mobile had parked along the driveway of KMU headquarters. According to a report from the labor group, at least six personnel were deployed and seen to have been asking the residents. The police left after ten minutes.

Following these incidents, KMU made dialogues with the barangay and found out that the police personnel are looking for a barangay official alleged to have the “list of loose firearms”.

The labor group mused that these narratives pose threat as these are, too, the same allegations towards #HRD7 case and the rest of political prisoners to have been charged with illegal possession of loose firearms and explosives.

They have also received information as regards red-tagging accusations towards the labor group members who live in their headquarters.

Accordingly, KMU sees these threats of harassment and intimidation as a blatant attempt to suppress their right to struggle amid the worsening political situation in the country.

[We vehemently condemn this act and ultimately call for accountability]

The labor group affirmed that they will furnish a report of the incident and ask for a dialogue to Commission on Human Rights (CHR) and Department of Labor and Employment (DOLE).

Office inspections will also be done in coordination with the CHR along with the barangay officials.

We will not be silenced

At 2:00 PM on January 11, Two youth leaders from the National Capital Region (NCR) under Anakbayan and Kabataan Partylist received suspicious, unregistered numbers which involved death and red-tagging threats alleging that they are members of the communist armed conflict.

“This red-tagging spree sponsored by the state forces has long been experienced by various progressive groups and individuals in the country; but this should not be the norm,” said in their written statement.

“Red-tagging and terrorist-tagging pose threats to the lives of activists and journalists alike. These sort of intimidation expose them to further danger that they should not be experiencing in the first place. Although this has been going on for years already, we should not remain idle, for doing so means accepting the label the fascists have given us in order to attain their goal of silencing those who speak against their wrongdoings,” the youth partylist added.

Anakbayan NCR shared the same sentiment, implying that these affronts are not new under the current administration.

[Branding progressive individuals or group to the New People’s Army is no longer new. It is only a direct attempt to further intimidate the critical minds of the people and sow fear alongside silencing them regarding the society struggle]

The youth party affirmed that they will persevere despite these continuous attacks, that “for doing so means accepting the label the fascists have given us in order to attain their goal of silencing those who speak against their wrongdoings.”

As the sole representative of youth in the Congress, the partylist asserted that they will not be intimidated by such threats as this is only a reason for them to “take another step forward in bringing down the regime that does nothing but terrorize the people it’s supposed to be serving.”

Anakbayan NCR asserted that they, along with the Filipino people, will not be silenced.

[While these attacks continue, we will never be silenced for it is only right to fight back against the tyrannical and dictatorial Duterte regime]