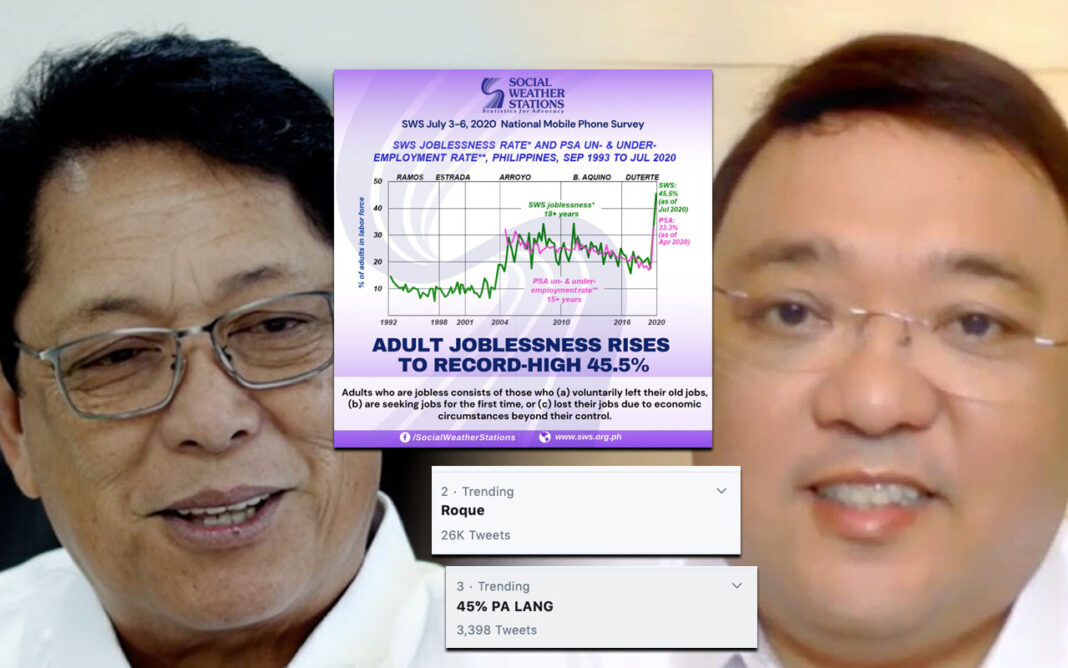 The Social Weather Stations (SWS) released its survey today conducted from July 3-6 that that found adult joblessness at a record-high 45.5% of the adult labor force. The joblessness rate surveyed is highest since the Fidel Ramos administration or in almost 30 years, the highest in all areas (Luzon since 2012, Visayas since 2007, and Mindanao since 2012), the highest among women and men (since 2019) and the highest among urban (since 2009) and rural areas (since 2012).

SWS defines the Labor Force as adults (18 years and above) presently with a job plus those looking for a job. The Labor Force Participation Rate is the proportion of adults in the labor force.

Adults who are jobless consists of those who (a) voluntarily left their old jobs, (b) are seeking jobs for the first time, or (c) lost their jobs due to economic circumstances beyond their control.

Department of Labor and Employment Secretary Silvestre Bello III refuted the SWS survey findings as “not actual joblessness” and the agency has recorded only 3.3 million who lost their jobs during the COVID-19 crisis.

[That is not actual joblessness. That is just a survey. Our record is from employers who reported closure, temporary closure or those who let go some functions or workers.]

The April 2020 Labor Force Survey of the Philippine Statistics Authority (PSA) released on June 5 reported 7.3 million unemployed and 6.4 million underemployed. Research group IBON pointed out then that the real unemployment rate is likely around 22% and the real number of unemployed around 14 million, but the PSA reported lower because of changed definition of unemployment. Since the methodology for counting the unemployed was revised in April 2005, jobless Filipinos who did not look for work in the last six months or are unable to immediately take up work are no longer considered unemployed and removed from the labor force.

Presidential Spokesperson Harry Roque said it is no surprise that unemployment rose and he is ‘delighted’ there was only 45% who are jobless and not 100%.

[I am delighted that not 100% lost their jobs because of the extended period we were on lockdown, I am still surprised at our resilience and that only 45% lost their jobs. It could have been worse because what we have here is complete lockdown.]

Labor alliance Kilusang Mayo Uno called on Duterte to ‘do something’ with the joblessness problem in the country. The group slammed the administration for being inutile, a failure and lacking sense of urgency amid the crisis.

[I would like to remind the president that there is a growing call for his removal from office.]

Netizens also hit Roque’s statement, who they said have consistently downplayed the records the country has been breaking such as highest total cases in Southeast Asia and lowest growth rate drop among others, by comparing other aspects of government pandemic response with other countries or saying other countries are suffering the same.

Another "QUOTABLE QUOTE" of Harry Roque.

45% of Filipinos are f*cking starving, depress and hopeless!

This is Philippines
WOW! THE AUDACITY! pic.twitter.com/dNJnmRtTQq

The Roque spin is nauseating.
Elated about the fact that 45% are unemployed. These are not just mere numbers, dumbass. Stop invalidating and fucking resign. This gov’t imposed economic, health, social and political disaster upon us. Resilience pa putangina. Nakakapagod. https://t.co/HvAbDlaeyH

Shame on you, Harry Roque – what a despicable piece of living vomitus you have become. https://t.co/BHu8A5QwjX

Yung nakaluhod na ang tao, nagagalak ka pa din? Strip Roque of his salary and allowances for four months and let’s see how cheerful he remains. To use resilience this way is an obscenity https://t.co/TofIVdNZwB